Who Wants to Be a Millionaire: Jeremy takes dig at player

Jeremy Clarkson, 60, was on hand to help another batch of contestants win big on Who Wants To Be A Millionaire. First up to hot seat was Tom, with a Fastest Finger time of 4.25 seconds and he started off his time on the ITV show with ease. The quizzing amateur used several of his lifelines before setting his safety net at £16,000. However, as he made his bid for the next cash point, he was hit with a tricky question.

The presenter took the show to a break and when it resumed, Tom was still none-the-wiser to the answer and he made a big decision to make.

Jeremy told viewers: “We are here and have been for some time with Tom. He’s on £16,000 but has no lifelines remaining though.”

“The Danish politician Birgitte Cyborg is the central character of which Nordic TV series? Borgen, Wallander, The Bridge or The Killing,” he readout.

“I have only heard of two of these programmes and have never heard of that character,” the player replied. 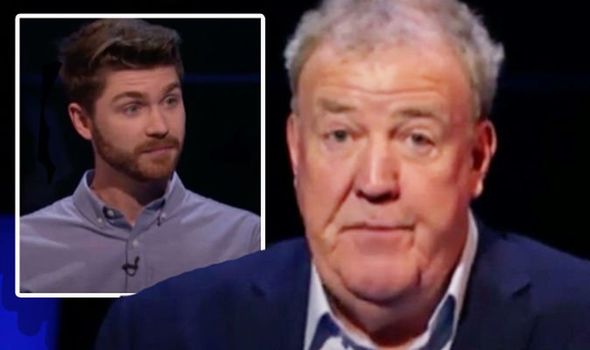 “Pointless me trying to talk through logic because there won’t be any. I’ve got nothing else to go on and nothing to lose so I think Wallander final answer,” Tom told the host.

Offering quite a stark remark to end the game at hand, Jeremy said: “I won’t take up any more of your time. That’s wrong.

“It was in fact Borgen. Just in case you are interested at home, Borgen is the nickname for Christiansborg Palace.

“Wallander was the police inspector, was it played by Kenneth Branagh? The Bridge was fantastic and so is The Tunnel, the spin-off from it.”

Who Wants To Be A Millionaire viewer

“The Killing was the Danish detective Sarah Lund,” he continued, before slamming the contestant for his efforts.

“No matter you came, you saw, you made a mess of it. Nevertheless, you are leaving with £16,000,” the host said before ushering Tom out of the studio.

Taking to Twitter, viewers responded to the result of the player’s loss, with one writing: “Is there really any reason to be so surly and rude, I’m sure he’s delighted to win £16k.”

Another posted: “Jeremy is unnecessarily rude and insulting to most contestants,” with a third commenting: “Clarkson is so rude.”

A fourth added: “Bring back Chris Tarrant,” to which a fifth responded: “Agreed. Jeremy is really unkind to some contestants!”

After Tom made his exit from the game, it was time for contestant Aston Lo to go up against Jeremy in the hot seat.

Luckily, this player managed to do just one better than his predecessor as he made it all the way to the £32,000 checkpoint.

Jeremy applauded the contestant on his efforts before welcoming the third and final quizzing amateur to the stand.

Bhupinder was optimistic of her chances at winning big and got her game off to a flying start as she answered question after question.

Unfortunately, there wasn’t enough time for her to finish as the red klaxon rang out to stop the round at play.

This means viewers will have to tune in next weekend to see just how far the contestant can get and if she beat Tom and Aston.

Who Wants To Be A Millionaire airs Sundays at 8pm on ITV.