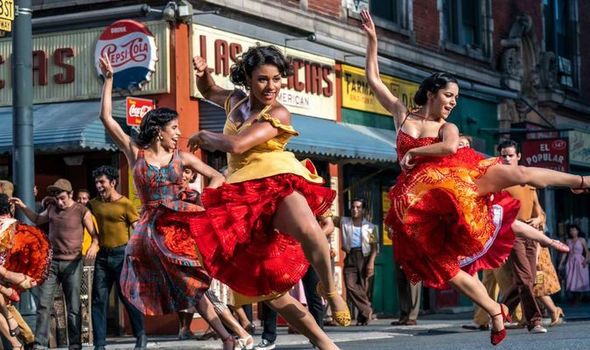 Steven Spielberg is taking the biggest gamble of his life with his new version of the classic movie musical WesSide Story, coming to British screens in December. It’s the remake absolutely no one was asking for, after the 1961 original won ten Academy Awards, including Best Picture, and remains one of the best-loved films of all time.

Hollywood is holding its breath, wondering whether this will be the crowning triumph of Spielberg’s illustrious career, or the moment of overreaching hubris when his monumental ego meets its match.

Despite its vaunted heritage, his movie comes loaded with a star accused of sexual assault, PC zealots ready to challenge its racial inclusivity, and the threat that Spielberg could even find himself “cancelled”.

The movie mogul has won four Oscars while bringing us such blockbusters as Jaws, Indiana Jones, E.T. – The Extraterrestrial and Jurassic Park, along with masterpieces Schindler’s List and Saving Private Ryan. Yet many believe the original West Side Story’s legacy could be sullied by Spielberg cashing in on its popularity.

“The original West Side Story film is as close to a sacred cow as movie musicals get,” wrote EntertainmentWeekly magazine.

At a New York charity screening of the original West Side Story the audience booed when a remake was mentioned.

Spielberg, who reportedly killed the idea of a remake of his own classic Jaws, has conjured up a story essentially the same as the original, but with some new choreography, dialogue and additional characters.

It’s the Romeo and Juliet tale of star-crossed lovers from warring cultures set amid New York’s 1950s street gangs as white Americans battle the influx of Puerto Rican immigrants: conflicts that endure to this day.

“This story is not only a product of its time, but that time has returned, and it’s returned with a kind of social fury,” says Spielberg, aged 74.

He aims to highlight the “battle against the obstacles of xenophobia and racial prejudice” – twin ills that resonate strongly in anAmerica still reeling from former President Trump’s anti-immigrant fervour.

The director strives to be politically correct by eliminating the original movie’s “whitewashing”, which saw many Puerto Rican characters portrayed by white actors in dark make-up. Instead, Spielberg hired only Hispanic actors and dancers for the immigrant roles.

Yet controversy still looms. Many Puerto Ricans are outraged that Spielberg is keeping the original film’s lyrics denigrating their island nation.

They rail against the song America, sung by Rita Moreno in the original film: “Puerto Rico, My heart’s devotion,/ Let it sink back in the ocean./Always the hurricanes blowing./ Always the population growing./ And the money owing.”

Puerto Rican activists claim that most migrants flee the island not because it is hell on earth, but because of economic necessity.

“No one wants to leave,” says University of Puerto Rico drama professor Isel Rodriguez, aged 42. “This is paradise.”

Despite Spielberg’s attempts at Puerto Rican inclusion, “he’s going to get cancelled for it,” predicts the NewYork Post. Tony winner Lin-Manuel Miranda’s Puerto Rican- American movie musical In The Heights opened this year and was savaged by PC critics complaining that it performed “cultural genocide” by only showing light-skinned Hispanics, while rendering darker skin hues “invisible.”

“What chance does Spielberg have . . ?” asked the Post, expecting similar attacks on the new West Side Story. “Say bye-bye to Oscar, Steven … If Lin-Manuel Miranda can get cancelled, so can you.” Then there is Spielberg’s leading man. Ansel Elgort, 27, the star of films including Baby Driver and The Fault In Our Stars, plays former Jets gang leader Tony.

Spielberg resisted calls to replace Elgort after he was accused of sexual assault by a former girlfriend, Gabby, while she was 17 years old in 2014.

Regardless of the truth, #MeToo activists could severely hurt West Side Story if they choose to boycott the film.

Anticipating accusations of racial and cultural insensitivity, Spielberg visited Puerto Rico in 2019 to placate residents, but met a challenging reception.

Many wondered whether he would recreate the original’s switchblade-wielding, hot-tempered, greasy-haired Hispanics – unfair stereotyping even in 1961. Professor Rodriguez, questioning Spielberg’s ability to represent the islanders, says: “I don’t know if they’ll be able to fix the problem with just Latino actors and good accents.”

Rodriguez, questioning Spielberg’s ability to represent the islanders, says: “I don’t know if they’ll be able to fix the problem with just Latino actors and good accents.”

Updating the film with added realism also has its perils.

George Chakiris, aged 87, who won an Oscar for playing the Sharks’ Puerto Rican gang leader Bernardo in the 1961 movie, laments that the original film’s idealised vision with its mostly bloodless fights would not work today, especially in such scenes as when the Jets attempt to rape Anita. “If someone were to do that today? everything’s so different.

“Somebody’s clothes would have to come off, which is so unnecessary and distracting,” Chakiris says.

Rita Moreno, aged 89, who won an Oscar for playing Anita – while daubed in skin-darkening make-up – was hired as an executive producer by Spielberg and “urged to share her perspective”, and correct some of the original film’s mistakes.

“I think they have done an incredible job,” says Moreno, who also plays the newly created role of Valentina.

Critics note that Spielberg could have reinventedWest Side Story in the contemporary Middle East, or amid Muslim immigrants persecuted in New York today.

Instead he has kept it in the Cold War late 1950s (the musical on which the film was based debuted on Broadway in 1957) before America’s civil rights movement, feminism and anti-war revolution of the ’60s, yet still hopes to comment on current racial and cultural inequities. “It’s very relevant today to essentially the rejection of anyone who isn’t white,” says the director. Spielberg’s £120million gamble was filmed in 2019 and was scheduled to open last year, but after pandemic delays it will now be released this Christmas, opening on the 60th anniversary of the original’s release.

Yet many keep asking: Why would anyone, even Spielberg, remake a classic? Does anyone remember the 1998 remake of Alfred Hitchcock’s Psycho? Or how The Wizard Of Oz was remade into the disastrous musical The Wiz? “What’s next – Spielberg remaking Citizen Kane or Casablanca?” asks one Hollywood studio executive.

“Do we really need a remake of #WestSideStory?” says one social media user. Writes another: “Steven Spielberg doing West Side Story? So there’ll be action figures then …?”

Spielberg’s £2.7billion fortune won’t be shaken if his West Side Story disappoints, but his reputation as a Hollywood savant who can do no wrong could undergo a radical reassessment – much like a hoodlum bringing a knife to a gunfight.

10/23/2021 TV & Movies Comments Off on West Side Story: Will Spielbergs remake tarnish his reputation?
Recent Posts