When Dr Scott Miller interviewed a zookeeper from Port Lympne Safari Park on This Morning, viewers rushed to Twitter to slam Phillip Schofield who interrupted the chat several times back in the studio. While Dr Scott attempted to learn more about how people can help the safari, he inadvertently teased a pair of rhinos with some branches and Phillip was furiously trying to get the vet to feed the animals.

Tony the zookeeper was just out of shot but could be heard discussing ways to help the zoo financially with Dr Scott.

Tony began: “We’ve had to close the parks and that’s our source of income not only for feeding and looking after the animals but also continuing with all our rewilding programmes back to the wild.”

However, as the vet listened to Tony’s response, Phillip shouted: “Put it back, put it back, give him the branch.”

Tony and Dr Scott couldn’t hear Phillip’s pleas as the zookeeper continued: “We’ve been asking people for donations, we’re a charity, we don’t have any shareholders so if people can help us they can visit our website.”

Read more: John Torode oblivious as kitchen ON FIRE on This Morning 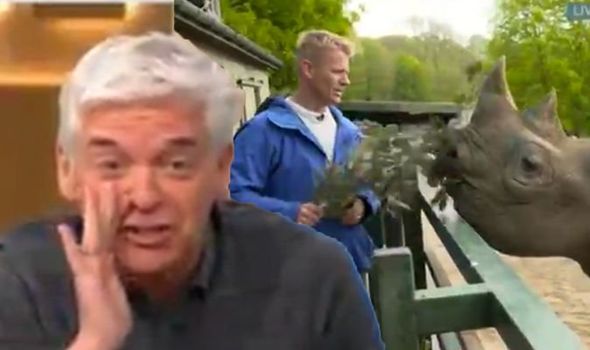 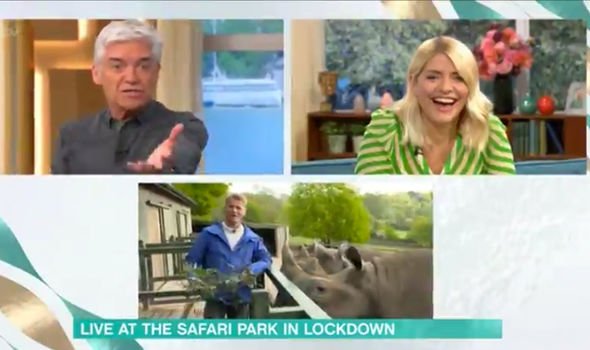 “[People can] look at the care packages on there or see if you can donate some money,” Tony explained.

“We’ve had some great support from local businesses, we’ve had Morrisons help us out…”

Shouting over the zookeeper, Phillip remarked: “You’ve just teased him, you’ve brought them back, give him the branch.” 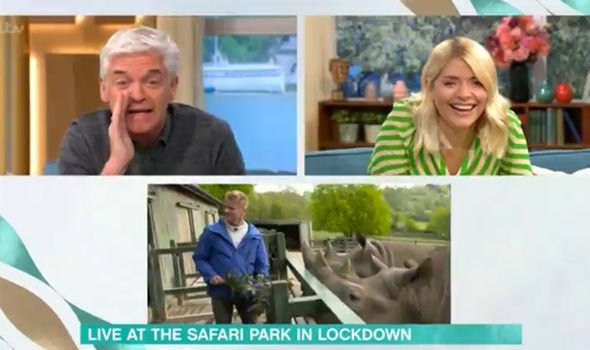 “Thank you so much, Tony, for inviting us here today, it is such a lovely thing to be doing to be looking after these rhinos,” Dr Scott concluded.

Phillip’s frustration grew as Dr Scott continued to hold branches just out of the rhinos’ reach and remarked: “What’s he doing?”

When the interview came to an end, Dr Scott finally allowed the rhinos a bite to eat and said: “Right now we’re going to do a little cooking segment, there you go girls and they’re making a lot of noise.

“A little bit like you two back in the studio when you’re fed food, really noisy eaters.”

This Morning viewers weren’t pleased with Phillip’s behaviour and took to Twitter to slam the host.

One said: “Shut the f**k up Phil! So bloody rude. That guy was talking about the charity and this moron is hosting over him!”

While another shared: “Shouting over that poor man’s interview. Unbelievably rude.”

“Well thanks to Phil we didn’t hear a word that man was saying, talk about being rude to your guests,” a third wrote.

“What’s the point in having a man on to talk about how his safari park is struggling in these difficult times and then shouting over the top of I’m so people can’t hear how to help,” a fifth asked.

Another viewer remarked: “It would’ve been nice to hear how to support the park, without Phil shouting over the top. So rude to the guests #ThisMorning.”

This Morning airs weekdays on ITV at 10am.

Related posts:
04/29/2020 TV & Movies Comments Off on ‘Unbelievably rude’ Phillip Schofield angers This Morning viewers as he shouts over guest
Recent Posts
We and our partners use cookies on this site to improve our service, perform analytics, personalize advertising, measure advertising performance, and remember website preferences.Ok