Take a piece of intellectual property, slap it onto a trendy genre, and presto: You’ve got a hot new show. That’s the formula that’s been feeding streaming content for some time now. Why can’t Marvel superheroes lead a sitcom, like “She-Hulk”? How about we make “Perry Mason” a dark and gritty seasonal anthology, rather than a case-of-the-week courtroom drama? What if “Sabrina the Teenage Witch” wasn’t a bright and bubbly comedy, but a moody and melodramatic teen mystery?

Mapping the teen drama template onto known characters has been a specialty of The CW in particular, and thus a boon for Netflix (which served as the network’s streaming home for more than a decade). From “Smallville” to “Riverdale,” it seemed like name recognition + soapy high school shenanigans was the simple equation to success. And here we are again with “Wednesday,” Alfred Gough and Miles Millar’s Addams Family spinoff spotlighting the solemn and sadistic daughter named after the middle of the week. (A line in a nursery rhyme inspired her name — “Wednesday’s child is full of woe” — and each episode pays tribute by incorporating the word “woe” into its title.) But even with macabre devotee Tim Burton helming four of the eight episodes, the series’ consistently conforms to fit a modern outline, until all that’s left is the implication of anything strange or ghastly — and another story we’ve seen countless times before.

Wednesday Addams (Jenna Ortega) is a troublemaker — not your typical high school prankster, mind you. The black-clad young woman sporting permanent pigtails isn’t putting a pin on her teacher’s seats or starting a food fight in the lunchroom. She is, as shown in the opening moments of “Wednesday,” avenging her bullied brother by dropping two bags of piranhas into the swimming pool, where her sibling’s tormentors are practicing water polo. “The only person who gets to torture my brother is me,” Wednesday says, as Edith Piaf’s “Non, Je Ne Regrette Rien” accompanies the visual of a toothy CGI fish biting the swim captain’s butt.

Here, in a typical American high school, Wednesday’s jet black hair and dark dress stand out against the red lockers and blue pool. It’s easy to see why she may not fit in, even before her extreme defense of baby brother Pugsley (Isaac Ordonez). But once she’s sent to Nevermore Academy (as punishment), such amusing, character-defining contrasts disappear. The “educational haven for supernaturally gifted Outcasts” is just as dark and shadowy as Wednesday would prefer. Even in Jericho, the nearby town of “Normies,” there seems to be permanent cloud cover and muted tones wherever you go. It’s a dull choice for a show ostensibly about a young girl who struggles to fit in — yes, the aesthetics help imply she’s found an ideal home (though she won’t admit it until season’s end, if then), but why would an entire school for Outcasts be built around one person’s purportedly odd preferences? Why, when Wednesday meets her animated roommate Enid (Emma Meyers) does her kaleidoscopic window decorations feel more out of place than Wednesday’s colorless accessories?

Burton’s influence on the production is equally limited. Perhaps too snug a fit for a story where the word “Outcasts” is a proper noun, the “Sweeney Todd” and “Edward Scissorhands” director isn’t overly inspired by a property he once hoped to turn into a stop-motion animated movie. Early episodes feature notable depth to many framings and small pops of contrast to help distinguish key elements. (Thing, the disembodied hand of the Addams’ family, is lit and tracked with ample glee, though the Foley work sounds off.) But the shift to TV doesn’t spark much in the way of creative flair for a director once cherished for his meticulous eye and morbid disposition.

In general, marked imagination is hard to come by. As Wednesday feels out her fresh environs, she picks up two crushes — Tyler (Hunter Doohan), a Normie barista who’s also the sheriff’s son, and Xavier (Percy Hynes), an Outcast artist who can bring his haunted drawings to life — a nemesis (popular-girl and siren Bianca, played by Joy Sunday), as well as a few friends, teachers, and suspicious adults. The requisite love triangle and burgeoning friendships are tested by various events, all of which seem to be named after Nevermore’s most famous alumnus, Edgar Allan Poe, like the school dance (the Rave’N Dance, get it?) and a house competition (a canoe race) where the winner takes home The Poe Cup. Throughout it all, Wednesday is investigating a growing series of homicides in the woods that separate Nevermore from Jericho, because, of course, there has to be a murder-mystery, too. 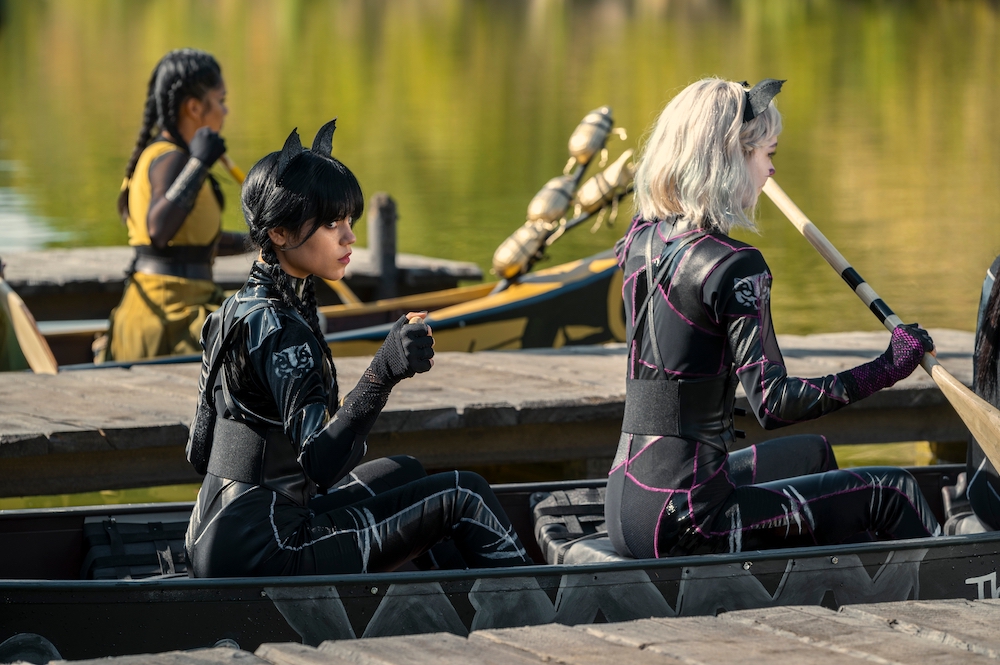 Though I could’ve done without Fred Armisen’s sketch version of Uncle Fester, good casting (courtesy of John Papsidera and his UK and Romania counterparts, Sophie Holland and Fiona Weir, respectively) helps the canned story go down smooth enough. Ortega shows sharpened range within the muted confines of an emotionless character. As Principal Larissa Weems, Gwendoline Christie floridly dances between trusted advisor (like Albus Dumbledore) and dubious rival (an Ed Rooney type). Jamie McShane, as the grumpy town sheriff, is always a treat, and Christina Ricci, as everyone’s favorite teacher Ms. Marilyn Thornhill, adds a meta gleam to the proceedings — maybe too much. Ricci played Wednesday in the ’90s movie adaptations of “The Addams Family,” but she also starred in Burton’s 1999 film, “Sleepy Hollow,” which appears to be another borrowed template for “Wednesday’s” story.

By the time the credits roll on Season 1, Wednesday is just another “odd” kid who nevertheless makes a lot of friends, woos a number of suitors, and saves the day. Little about her is startling or unpleasant, save for her repeated asides about torturing people or enjoying a bit of terror. But when it comes to the macabre, Wednesday (and, more so, “Wednesday”) is all talk and little action — a well-rounded character hammered into the rectangular icon on your Netflix homescreen, by an algorithm built to conform.