Alyssa Farah Griffin wowed fans on The View with her look doing the Monday’s show – and we have to admit it is iconic! The TV personality joined her fellow The View co-stars in costume for the opening of the show. While Sara Haines channelled Moira Rose from Schitt’s Creek, and Whoopi Goldberg dressed as June from The Handmaid’s Tale, Alyssa went for a very different look!

Recreating the opening of Sex and the City, Alyssa dressed up as Carrie Bradshaw, complete with curly locks and a tulle white skirt. In a hilarious moment, she is soaked with water while recreating the moment Carrie is splashed by a bus advertising her column, leading to the audience roaring with laughter.

WATCH: Alyssa Farah Griffin wows in Halloween look on The View – and fans are impressed!

Fans were loving the look on Twitter, with one writing: “I think she did a great job, one of my favorite characters too,” while another added: “All the Halloween costumes are amazing. Love Whoopi’s Handmaid’s Tale and the message in her red cape. Happy Halloween to you all. @JoyVBehar costume was incredible!”

MORE: Meghan McCain opens up about decision to leave The View after cast announcement

Alyssa herself joked about the clip, tweeting: “True story: we shot this twice because @Brianteta wanted me to get drenched. Happy Halloween!” 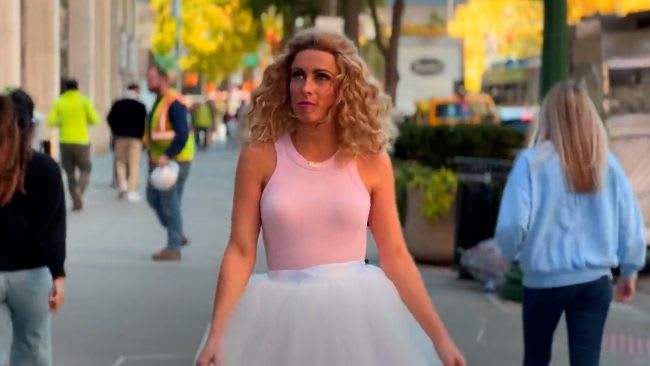 Did you love her look?

Alyssa joined the show back in August, and opened up to People about the exciting news, saying: “I am just thrilled, honored, humbled, so many words. But it finally feels real. I’ve known the news for a little bit, and finally having it come out was just, it’s a dream come true. So I’m just so excited.

“There’s no better way to describe The View than truly iconic,” she added. “And it’s iconic because it’s really set the tone for women speaking up and speaking out. I never could have dreamed that I would be at this table, and I’m so deeply, deeply honored to be there.”

10/31/2022 TV & Movies Comments Off on The View star Alyssa Farah Griffin wows in iconic look for Halloween – and fans are impressed!
Recent Posts