Warning: The following recap contains spoilers from The Falcon and the Winter Soldier, Episode 3 “The Power Broker”

The halfway point of Disney+/Marvel’s The Falcon and the Winter Solider served up plenty of set-up, with a chock-a-block amounts of details from the Marvel Cinematic Universe as well as returning characters and cameos galore. 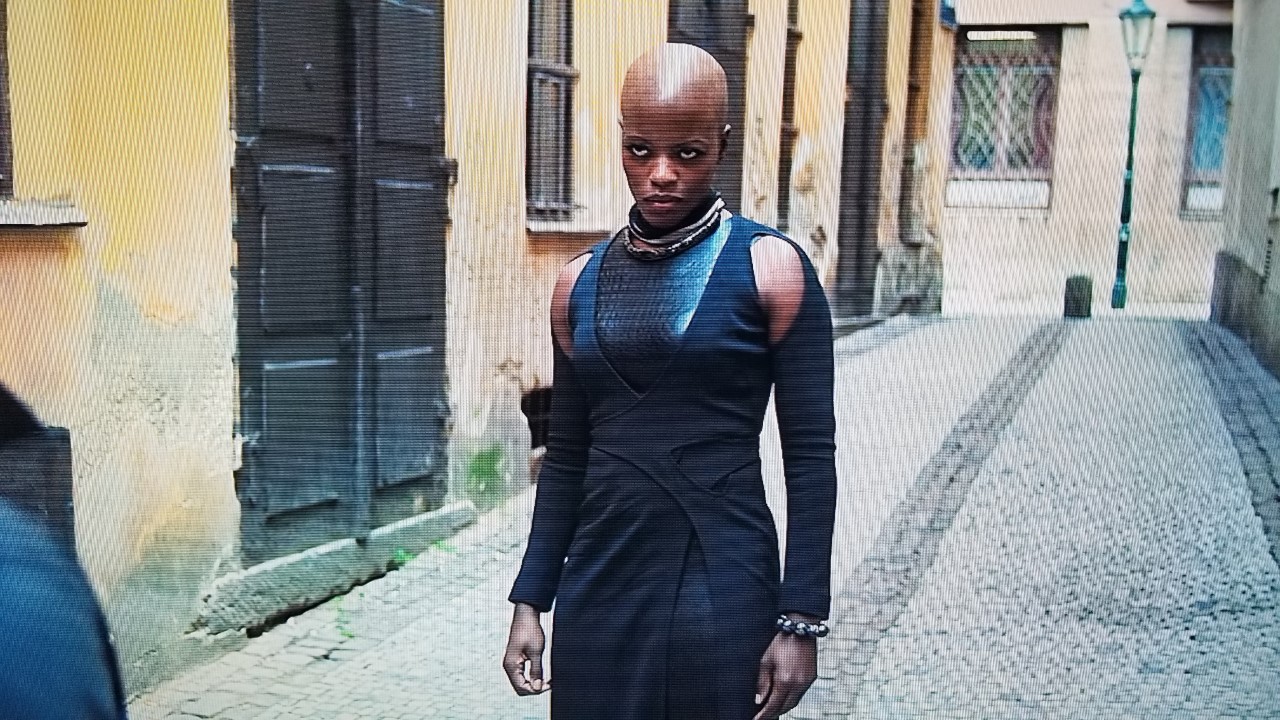 The biggest surprise, as is typical for any of these new Marvel Disney+ episodes, came with its cliffhanger: The arrival of Florence Kasumba’s Black Panther warrior Ayo who Bucky encounters on the streets in Latvia. “I’m here for Zemo” she declares in Wakandan. Zemo assassinated King T’Chaka in Captain America: Civil War, and Ayo has come for his head. Who knows how this plot string will get tied up, but as Deadline first told you there is a Wakanda series in the works for Disney+. This looks like the launchpad. 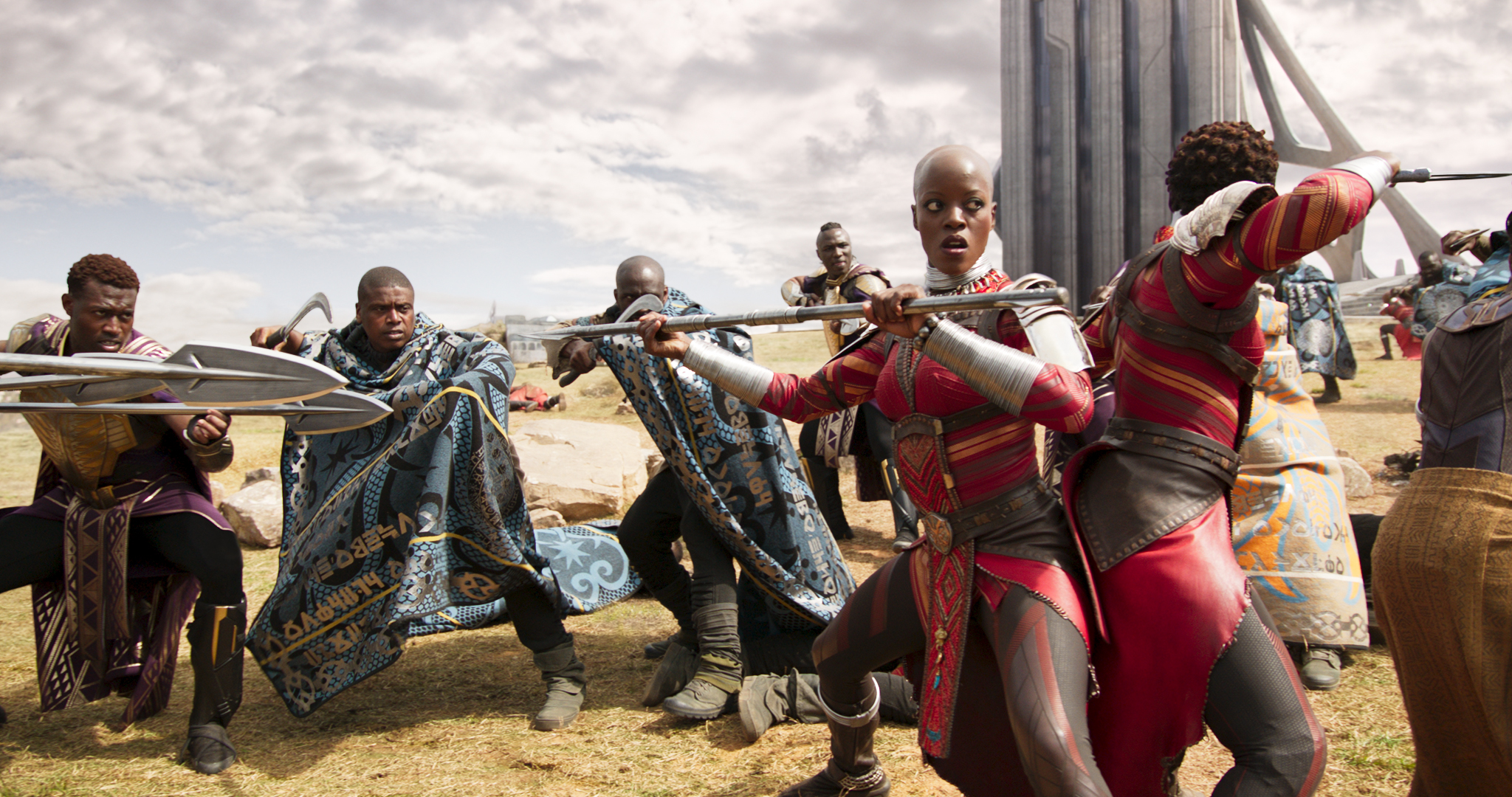 Episode 3 amounted to Sam and Bucky’s quest for the latest architect of the Super Serum, a journey that took them to Germany, where old enemy-turned-ally Zemo sprung himself out of jail to assist them. Zemo flies them in his private jet to the MCU fictional Pacific Rim island of Madripoor and ultimately to Latvia.

Zemo knows why Bucky and Sam have come to visit him in prison: They’re assuming Hydra has something to do with the super serum, and they’re desperate enough to seek him out. “Lucky you for you, I know were to begin,” says Zemo.

After slipping out of prison in a conceived jail riot, Zemo meets up with the duo at his classic car garage. He’s a rich dude aka Baron Zemo, with a private jet and some cool engines to make Jay Leno jealous. Zemo takes the duo, with Sam disguised as Conrad Mack aka Smiling Tiger (a mute Marvel character who is known to have claws on his fingers and toes as was part of a superhuman group known as the Folding Circle in Vietnam) to a Madripoor femme kingpin Selby. “I got word from on high, you ain’t welcome here,” says one of her thugs to Zemo at her club.

“I have no business with the Power Broker,” says Zemo, “but if he insists he either come talk to me, or bring Selby for a chat.” Zemo tells Sam and Bucky that he doesn’t know The Power Broker, only by reputation, but in Madripoor he’s judge, jury and executioner. It’s important to note here that Zemo still has some control over Winter Soldier Bucky, for with one a word command of “attack”, get the former soldier to spring into fight at the bar.

Zemo also knows how to get into Bucky’s head: On their plane trip, he retrieves a list of names which Bucky has written down. On the top the list is “Nakajima”. “If you touch that again — I’ll kill you!” Bucky yells at Zemo. “I understand these are people you wronged as the Winter Soldier,” Zemo tells Bucky.  RJ Nakajima was a management consultant who Bucky killed after falling witness to an assassination, and as we saw in episode one of Falcon and the Winter Soldier, the Winter Solider now lives next door to RJ’s dad Yori, who is a dear friend.

Zemo, Bucky and Sam learn from Selby that Dr. Wilfred Nagel is behind the latest development of Super serum. He happens to be Madripoor. “The Power Broker had him working on the serum, but things didn’t go as planned,” she tells them. Sam’s cover is blown when his sister calls him on his cell and Selby and her thugs go wild. Selby is shot mysteriously, and Zemo, Sam and Bucky become immediate bounties in town. Fleeing the club, the guys learn they have “a guardian angel” as Zemo puts it, who shoots off those pursuing them: Sharon Carter.

She’s been an enemy of the state, unable to return to the U.S. after helping Steve Rogers in Civil War, she now lives in the High Town section of Madripoor with a private gallery that houses the world’s actual pieces of classic art. Sharon and the guy wind up at a dock with several shipping crates, one of them housing Nagel’s lab. Zemo, Bucky and Sam raid Nagel’s hideout and he tells them that the Flag Smashers stole 20 vials of super serum, taken from Isaiah Bradley’s blood. Nagel was brought in from Hydra’s program and then recruited by the CIA; he took the serum to another level. “I can only imagine what the Power Broker has planned for that poor girl,” Nagel tells the gang.

Sam asks about Karli’s whereabouts. “I don’t know,” answers Nagel, “But a couple of days ago she called and asked if I could help someone named Donya Madani. Poor woman has tuberculosis. Typical of overpopulation in displacement camps like that.” We later learn that Donya, a mentor to head Flag Smasher Karli, unfortunately dies. It’s because of Donia that Karli wanted to be a teacher before she was injected with the serum.

The bounty hunters descend on the lab, with Sharon fending many of them off, bringing back memories of Emily VanCamp’s awesome fighting style from her ABC signature series Revenge. As Sharon enters Nagel’s hideout, Zemo shoots him unexpectedly in the head. A bounty hunters’ rocket launcher destroys the lab, and the guys hope in another of Zemo’s classic cars to zoom away. Before doing so, Sam tells Sharon, “Come back to the states with us.” She responds, “I told you, I can’t, just get me that pardon you promised me.”

Rejoining with one of her allies, Sharon tells her that they have a couple of big problems. Gosh, does she mean the Falcon and the Winter Soldier? And is Sharon Carter the Power Broker?

In Lithuania, Karli tells her cohort that she wants to give the serum to kids in the displacement camps, but “the power broker is going to come begging” for the medicine.

The episode ends with Zemo, Sam and Bucky heading to Latvia. “I have a place we can go,” says Zemo,”I, for one, am looking forward to coming face to face with Karli.”

And throughout all of this, where is John Walker’s Captain America and right hand guy Battlestar? We see them during two instances, at the top of the episode and toward the end and they’re several steps behind the progress Sam and Bucky have made. It’s only at the end that Walker, at Zemo’s prison, figures out he’s gone, telling Battlestar, that they’re going to have to “bet on someone who’s got a better hand.”

04/02/2021 TV & Movies Comments Off on ‘The Falcon And The Winter Soldier’ Episode 3 “Power Broker”: That Jaw-Dropping Cliffhanger MCU Cameo & What’s Next
Recent Posts