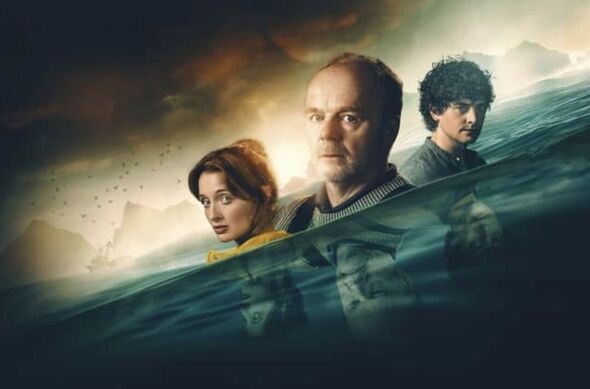 Now a campaigner for better diagnosis of sepsis, the actor, 60, believes that treatment for the infection in the NHS is a “postcode lottery”.

Mr Watkins plays Ed Collier, a fisherman who is haunted by the death of his young son and has constant flashbacks.

He said: “Ed is someone who you’re not quite sure about and is struggling. The other component obviously is they’ve lost a child in their family in their history as I’ve done.

“I knew what I was letting myself in for but I felt that it was such a good piece I had no worries about sharing my own feelings.

“It’s one of the most personal dramas I’ve done. It’s so on the nose. In the first scene, I’m trying to find my son who has disappeared.”

“This is particularly apposite — 12 years ago we lost Maude; in the script, it’s 10/11 years since their tragedy.”

The actor found the flashback scenes “difficult” but said: “If you can connect with your audience, and they’re emotionally touched by it, and hopefully by Ed, and if they know my story a bit, those people who have had bereavement will know that we’re sharing genuine feelings, and it’s not just pure entertainment.”

Men, he reveals, are particularly affected by bereavement.

He said: “Often men will reveal, ‘I’ve got to cope and I mustn’t let it affect me.’ But of course it does. And it actually chips away and families find things difficult.”

Meanwhile, Mr Watkins says it’s “frustrating” for him that sepsis diagnosis procedures are not common “across the whole of the NHS” despite he and his wife Clara campaigning since Maude’s death on New Year’s Day 2011.

Mr Watkins is now patron of Child Bereavement UK, a charity that supports children, young people and families when a child grieves or when a child dies.

Prince William is the Royal Patron whom he “has met several times”.

Asked if diagnosis across the NHS was now a postcode lottery, he replied: “Yes, it is. And this has been flagged up many times, including by a journalist who did a documentary about his father who died in Stoke of sepsis, and there was an element of a postcode lottery.”

“Elsewhere, some trusts, from either initiatives instigated by the trust itself, or by individual nurses or practitioners, have sepsis procedures in place.”

“At Leeds Royal Infirmary where I visited three or four years ago they had a whole pathway and all sorts of wonderful stuff, but this is not standard across the whole NHS.”

Watkins is creating a documentary for ITV later this year, about sepsis and child bereavement, reflecting on his own tragedy.

He said: “It’s time to share a bit because it will help other people, letting people know they’re not alone or that other people suffer and it’s okay, you know. You can get through.“

We talk in the documentary about Kings Hospital which has this thing called a “SIM” which is a robot into which you can programme symptoms, and then, nurses, trainee nurses and consultants can go and work out what’s wrong with the child.

“So you know, that exists, but that’s not available to all the staff at the hospital and certainly not available across the whole of the NHS, so it’s frustrating.”