Ben Shephard, 45, and Kate Garraway, 53, were joined by Scotland’s First Minister Nicola Sturgeon, 50, on Good Morning Britain to discuss numerous matters. One such headline they spoke about were the scenes from America where supporters of President Donald Trump, 74, stormed the Capitol on Wednesday after the leader of the United States falsely claimed the election ballots had not been counted properly. Speaking to the SNP politician, the journalist explained they were asking her for her opinion as a “world leader,” which left ITV viewers rather irate. 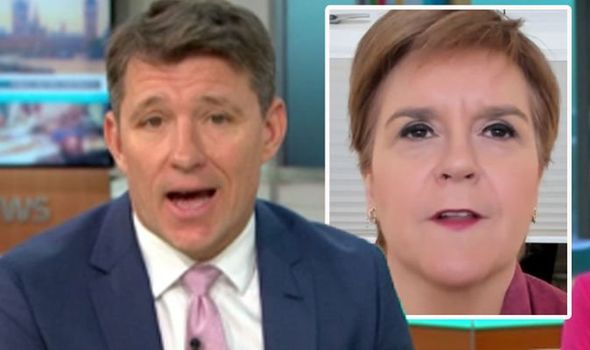 Taking to Twitter, one viewer wrote: “Sturgeon world leader? Err, no Ben! Stick to game shows it’s what you do best #GMB.”

Another added: “Sturgeon is not a world leader! She’s the leader of a big council at best, and she’s bad at that! #GMB.”

Whilst a third commented: “Why is a town councillor on #GMB talking about Trump? Incredible what an expert Nicola Sturgeon is on anything but what she’s actually supposed to be governing.”

A fourth posted: “@NicolaSturgeon preaching about not accepting a result is like a Tramp slagging your shoes! And for the record, she’s not a ‘world leader’.

“Boris is her boss! Ask her about her third world constituency, see if she could find it on a map. @benshephard @kategarraway #GMB,” they continued.

01/07/2021 TV & Movies Comments Off on ‘Sturgeon not a world leader’ GMB’s Ben Shephard in backlash for First Minister interview
Recent Posts
We and our partners use cookies on this site to improve our service, perform analytics, personalize advertising, measure advertising performance, and remember website preferences.Ok