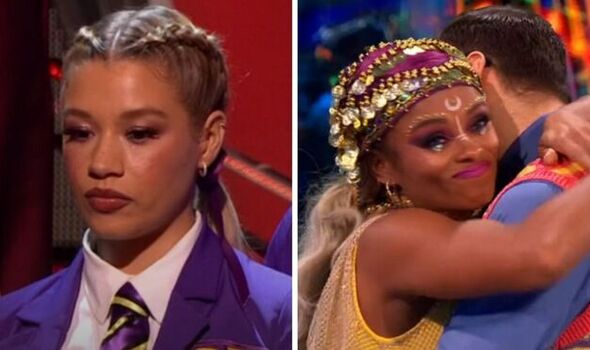 Strictly: Fleur East reacts to talk she's been 'under marked'

Strictly Come Dancing returned on Saturday night, and saw the remaining celebrity contestants take to the ballroom floor in a bid to impress the judges. However, tonight, two couples will land in the bottom two, meaning they will have to dance again in the hopes it’s enough to stay in the competition.

Speaking exclusively to Express.co.uk about who could be at risk, body language expert Darren Stanton believes Fleur and Molly will land in the bottom two.

On behalf of Betfair, Darren claims the duo will perform in the dance-off because they struggle to hide their emotions.

Both Fleur and Molly have both been in the dreaded bottom two before, and it was apparent that neither wanted to go home.

“I believe Molly and Fleur could be at risk this week,” Darren began.

“Despite being extremely talented, the pair have clearly found it difficult to hide their emotions – especially while getting negative feedback from the judges.

“I think we have seen the limit of what these contestants can show.”

Discussing his thoughts about who could win, the expert continued: “I believe Ellie, Hamza and Kym will make it to the final.

“While it’s clear Ellie wants to make it to the final, I believe Kym is underplaying her competitive streak and eagerness to win.

“She has worked incredibly hard over the course of her career and her Strictly journey is no different. I think Kym has met her match in the motivation stakes with Ellie.”

Despite Darren’s predictions, Fleur and Vito Coppolo stunned the judges with their Waltz, scoring 35 points from the judges.

Molly and Carlos Gu also seemed to wow with their Foxtrot, scoring a respectable 35 points.

Hamza Yassin also topped the leaderboard, while Tony Adams landed at the bottom with Katya Jones.

Last weekend, James Bye was sent home after landing in the dance-off with Fleur.

Fleur’s disappointment was evident as she spoke with Tess Daly about it.

The X Factor star emotionally said: “We’ve worked really hard this week but this is how it goes right?

“We have just got to do our best, yeah…”

Offering her advice, Motsi Mabuse told Fleur: “Well, my word of advice, honestly is that just to repeat what you did.

“Dance, keep your spirits up, keep your energy up. You know what you can do, so just show it again.”

Fleur’s hard work in the dance-off paid off after all four judges decided to save her.

However, will she be so lucky this weekend?

Strictly Come Dancing returns on Sunday at 7.15pm on BBC One.