Just in time for Pride Month, the show sent Maurice to a gay bar where he ran into Calvin, whose purpose on this show is getting thinner as the weeks go by. In a drunken stupor, Calvin laid into Maurice about being a terrible person for not wanting to give Que a second chance, once again ignoring the safety and emotional wellbeing of his supposed friend in favor of… we don’t even know. Seriously, what does Calvin hope to gain from inviting Que into their apartment, other than an occasional dinner?

Que may be “cash-sexual,” but he looked like he was ready to throw down with Calvin free of charge. Do I actually think they’ll go through with it? Probably not. But something has Maurice screaming in the preview for next week’s episode, and I for one can’t wait to see what that is.

Speaking of falsifying one’s sexuality for personal gain, Robin is officially my new favorite character on this show. Not only did he get Hayden to reveal that he slept with Fatima (which is against company policy), but he also put a stop to Hayden’s questions about his relationship with Andi by pretending to be gay. When he looked at Hayden and said “You’re actually more my speed,” I just about died. Hayden was sweating. I can’t wait to see that little weasel relay this information back to Gary. 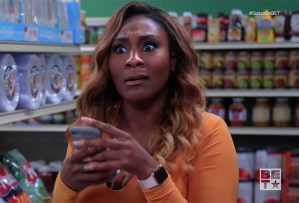 * A quick Google search in the grocery store confirmed that Bayo is indeed an African prince, which seems to excite Danni more than it does Sabrina. “Bitch, you’re f–ing Black Panther and Eddie Murphy all rolled into one!” Danni declared in disbelief. She also doesn’t understand why Sabrina asked her not to tell the other girls about Bayo’s royal secret, and I’m with her. As she asked, “Why would you not want to gloat about this?” (Sabrina, listen, while you’re deciding whether or not to keep dating Bayo, Calvin is talking to a gay prostitute about vibrators. MARRY THAT PRINCE.)

* Aaron finally won over Karen this week, and all it took was the most elaborate doodling I have ever witnessed in my life. Not only did this man casually draw a picture of Karen in the future, but all of the lines were made up of words that described how much he loves her. That baby better be Aaron’s.

* Kudos to El Fuego for knowing his worth. After bumping into him at Andi’s apartment, Danni tried to get El Fuego to buy her dinner, but he reversed the invitation like a ninja and got her to cook for him at home instead. Then again, how could he buy her dinner when he didn’t even charge Andi for his bug-sweeping services? I understand there being a friends-and-family discount, but that’s just bad business.

* The award for this week’s Most Meta Moment goes to Zac. When Fatima told him that she was willing to wait all night at the police station, he replied, “With what? A picket sign that says ‘hashtag free Zac’?” It’s like he knows he’s part of #SistasOnBET!

Your thoughts on this week’s episode of Sistas? Drop ’em in a comment below.