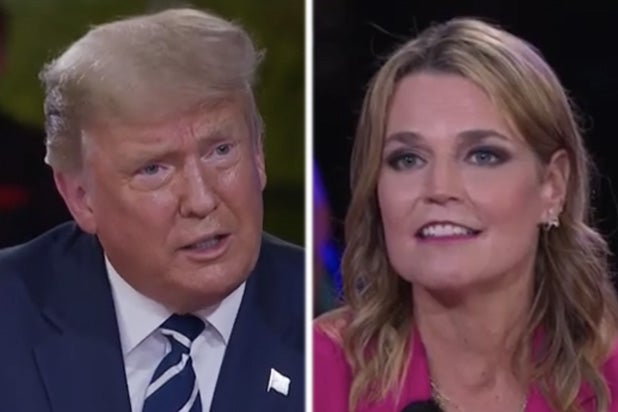 Savannah Guthrie called out President Donald Trump for retweeting a false conspiracy theory about Joe Biden to his 87 million followers on Twitter.

“Why would you send a lie like that to your followers?” Guthrie asked Trump at Thursday night’s town hall on NBC News.

“I don’t get that. You’re the president, you’re not like some crazy uncle who can retweet whatever,” Guthrie responded.

Earlier, Guthrie asked Trump if he would disavow QAnon “in its entirety,” which Trump refused to do.

“It is this theory that Democrats are a satanic pedophile ring and that you are a savior of that. Now, can you just once and for all state that that is completely not true and disavow QAnon in its entirety?” Guthrie asked.

“I know nothing about QAnon,” Trump responded.

“I just told you,” Guthrie fired back.

His response was reminiscent of Trump’s refusal to condemn white supremacists and other militia groups at the first presidential debate with Joe Biden last month, when the president instead told the Proud Boys, an SPLC-designated hate group,  to “stand back and stand by.” It wasn’t until a few days later, after Trump was roundly criticized for his comments, that the president backpedaled and said he condemned “all white supremacists.”

And watch Guthrie push Trump on his retweeting of conspiracy theories here:

10/16/2020 TV & Movies Comments Off on Savannah Guthrie Pushes Trump on QAnon, Conspiracy Theories
Recent Posts
We and our partners use cookies on this site to improve our service, perform analytics, personalize advertising, measure advertising performance, and remember website preferences.Ok