Piers Morgan was joined by the Queen’s former aide Dickie Arbiter, TalkTV broadcaster Esther Krakue and former newspaper editor Emily Sheffield on Wednesday’s show. Drawing comparisons with the Queen, the panel discussed Charles’ coronation and how grand the occasion should be.

Piers began: “My gut feeling about this is if you’re going to have a monarchy, do it properly.

“The great thing about the last 10 days was being able to show the world that nobody has anything like this.

“If you start downsizing everything you kind of end up where all the other European monarchies went which is you become so downsized, it becomes pointless.”

Dickie argued: “There are certain things in the service you’ve got to have. 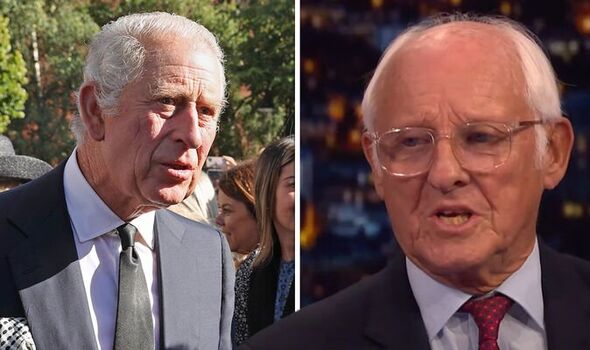 “The crowning might not be the same as the late Queen’s where Edward’s crown was placed on her head.

“It might be raised over King Charles his head, and then placed on a cushion, a symbolic crowning.”

The TalkTV host pointed out that Camilla, the Queen Consort will also be crowned in the ceremony.

Emily disagreed: “The only thing I would warn maybe, is when the Queen was coronated this was a young woman, a very good-looking young woman.

“The shock of her father’s death meant that she was suddenly escalated to her role as head of the monarchy.

“Charles is not going to have the same glamour.”

Piers argued with Emily that the differences between the Queen and Charles were an incentive for the King’s coronation to be “glamorous”.

“Yes, make it look glamorous, but be careful you don’t over primp it,” Emily hit back.

Meanwhile, the panel addressed the rift between Prince Harry and Prince William.

The TalkTV host observed: “I didn’t see William give Harry a single glance the entire time they were seen in public, let alone Kate and Meghan.

09/21/2022 TV & Movies Comments Off on Royal expert hits back over Charles coronation Its tradition!
Recent Posts