By the end of Resident Alien‘s freshman run, Harry Vanderspiegel was almost home free. But the realization that young Max was stowed away in his spaceship cabin changed everything for our new favorite E.T. Luckily for us (but unluckily for its residents), he’s doing the right thing and jet-setting back to the town of Patience, Colo.

While Harry’s return is bound to be bumpy, he isn’t the only one wading through some major emotional baggage when Season 2 kicks off this Wednesday (9/8c on Syfy and USA Network). As Asta (Sara Tomko) pushes Harry to build new connections with some of the townsfolk, the growing friendship between her daughter Jay and best friend D’Arcy is “really hard for her to take,” says Tomko.

“It causes a little bit of a hesitancy with D’Arcy because Asta’s jealous and she sort of takes it out of her,” the actress says. “We’re going to see them have this moment of being angry with one another because D’Arcy also knows that Asta’s lying to her.”

While the BFFs tiptoe around each other, the jealousy and lies weigh heavily on them both as they work to maintain the friendship that clearly means so much to them. But Asta’s big secret about Patience’s resident alien continues to cause a divide in the women’s relationship.

“Season 1 into Season 2 is Asta and D’Arcy making amends, coming back together, figuring it out, and Asta almost telling D’Arcy [the truth] over and over again,” says Alice Wetterlund, who plays D’Arcy. “It’s so unnatural for Asta to keep something this big from her, but she has to. That’s the dynamic with them, and that provides the tension.” 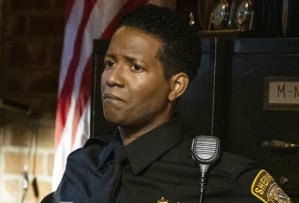 As for the Jay situation, Wetterlund offers the following insight: “Jay is a teenager, and so is D’Arcy, emotionally speaking, so it’s just natural for her. She doesn’t see anything wrong with it. She has no clue what it would be like to have a daughter, and she doesn’t want to have a clue. She’s just like, ‘Yeah, we’re friends. Whatever,’ and in a lot of ways, her thoughtlessness leads to this conflict with her best friend.”

And while Asta works overtime keeping Harry’s identity a secret, Sheriff Mike (Corey Reynolds) is hot on Harry’s tail. But aside from his work on the town’s biggest case, viewers will learn a whole lot more about Resident Alien‘s resident sheriff. Early in the season, we learn Mike has suffered a tragic loss in his life, but the “who” and “what” of it all will remain a mystery, at least for a while.

“He has a past that he is running from, or that is chasing him,” hints Reynolds. “Harry and Mike are really the only two people who aren’t from Patience, so this season, we’re spending a little more time explaining how Mike got there and why he is in this small little mountain town. Like many people, he’s got demons, and I think those demons drive a lot of his behavior. They drive a lot of his insecurities, which drive a lot of his antagonism. It’ll be a fun journey for the audience to get a broader understanding of who he is and why he is the way he is.”