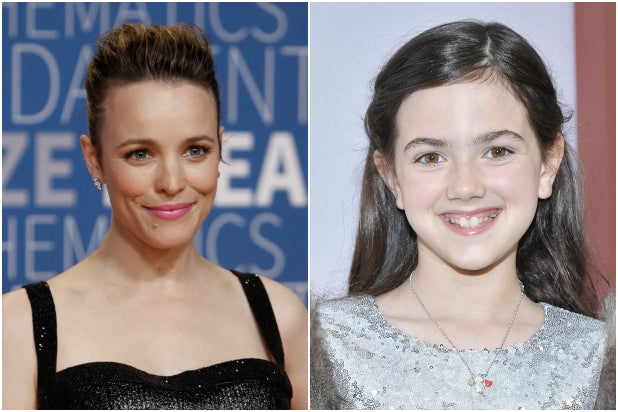 Rachel McAdams and 12-year-old Abby Ryder Fortson have been cast to star in Lionsgate’s adaptation of the classic Judy Blume novel “Are You There God? It’s Me, Margaret.”

“Are You There God? It’s Me Margaret” will be written and directed by Kelly Fremon Craig. The legendary James L. Brooks is producing the film adaptation through his Gracie Films banner after he and Fremon Craig previously collaborated on “The Edge of Seventeen.” Production on the film is expected to being in April.

“Are You There God? It’s Me Margaret” is a timeless coming-of-age story about a sixth-grader who questions everything about adolescence and puberty while searching the universe for whatever answers she can find. With her mother and grandmother trying to guide her through a time when everything is changing, they too find that you never stop questioning your path and defining what is meaningful in your life.

The book was first published in 1970 and has transcended decades. Time Magazine listed it among the top 100 fiction books dating back to 1923, and fans of the book have successfully kept it from being banned from school bookshelves on numerous occasions. For decades, Blume refused to authorize screen adaptations of the book, but warmed to Brooks and Fremon Craig’s idea.

Julie Ansell, Richard Sakai, Amy Brooks, Fremon Craig and Blume will join Brooks as producers on the film. Meredith Wieck and Chelsea Kujawa are overseeing the project for the studio.

“Abby is the kind of extraordinarily rare talent that comes along once a generation. The minute she walked in the room, she knocked us off our feet with her humor, vitality, and instantly lovable presence. We knew we’d found Margaret,” Fremon Craig said in a statement. “Together with Rachel McAdams’ exceptional talent for creating indelible characters that make you laugh out loud, bawl your eyes out, or both — there couldn’t be a better combination to bring Judy Blume’s much-beloved characters to life on screen.”

“The reason Margaret has struck a chord for 50 years is that her emotions are universal and timeless. Abby is an accomplished and gifted actress, but after reading many young actresses it was clear to us that Abby IS Margaret — she has, innately, the same wit, sincerity and relatability as our heroine and will make Judy Blume proud,” Lionsgate’s president of production, Erin Westerman, said in a statement. “We’re thrilled that she’ll be paired opposite Rachel McAdams as Barbara, Margaret’s mother and a woman navigating her own place in the world. Rachel has a resume filled with iconic characters and with every warm, vulnerable performance, she cracks the audience open. As Barbara, generations of mothers — who rarely see themselves depicted holistically and authentically — will see themselves in her portrayal.”

“As the cast comes together my excitement grows,” Blume added in her own statement. “Abby is funny and tender, strong yet vulnerable. She IS Margaret. And Rachel — wow! — does it get any better? A funny, loving, sexy, real woman who is also a mom. I can’t wait to see these two playing mother and daughter. It all began with trusting Kelly and Jim and they’ve proven how much this project means to them, which means everything to me.”

Abby Ryder Fortson has starred in “Ant-Man” and “Ant-Man and the Wasp” as well as the pilot episode of Amazon’s “Tales From the Loop” and the show “The Whispers.” Her other credits include “A Dog’s Journey,” “Forever My Girl,” “Togetherness,” “Transparent” and “Room 104.” She will next star in the film “Rated” from director John Fortson. She is represented by Wendi Green at Atlas Artists and attorney Alex Kohner.

McAdams most recently starred opposite Will Ferrell in the Netflix comedy “Eurovision Song Contest: The Story of Fire Saga.” She’ll next be seen in “Doctor Strange in the Multiverse of Madness.” She is represented by WME, Magnolia and Hirsch Wallenstein.

02/19/2021 TV & Movies Comments Off on Rachel McAdams, Abby Ryder Fortson to Star in 'Are You There God? It's Me, Margaret'
Recent Posts