In Quantum Leap‘s premiere episode, Ben Song (played by Raymond Lee) made an unauthorized leap and wound up in the body of a would-be diamond thief in 1985. The details of why he jumped remain unclear, but we now know that Al’s daughter Janice Calavicci is somehow involved.

At the end of the hour, Herbert “Magic” Williams (Ernie Hudson) revealed that Janice wanted to follow in her father’s footsteps and take part in the new Quantum Leap project. However, the Department of Defense denied her over concerns about her emotional ties to Al (played in the original series by Dean Stockwell), who died last year, and Sam (Scott Bakula), who never made it back home. On the night of Ben’s jump, Janice sent Ben urgent messages to do so now since they were “running out of time.”

According to showrunner Martin Gero, we’re only just getting started with Janice. “The Calaviccis play a huge part of Season 1,” he tells TVLine. “Georgina Reilly, who plays Janice, will recur heavily on the show.”

NBC’s new take on Quantum Leap was being developed while Stockwell was still alive, and producers always knew the Calavicci family would be a major part of the story. But after Stockwell’s death in November 2021, the show’s handling of Al’s character evolved. 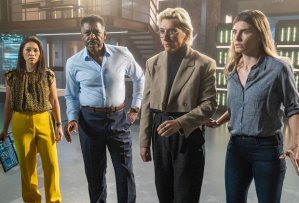 “The dream was always to potentially have Dean play a small role on the show,” Gero shares. “But when he passed, it was important for us to maintain the legacy of that character in the show in a real and profound way.”

Read on for additional tidbits from showrunner Martin Gero and stars Raymond Lee and Ernie Hudson.

Gero on Quantum Leap’s ties to the original series: “The show is its own thing, but we have this really beautiful connection to the past that is informing everything that we’re doing, and in a way that I think will reward viewers of the old show but not alienate new viewers who maybe haven’t seen all 90-plus episodes of Quantum Leap. It’s a really cool story, and it’s going to some really awesome places, and I can’t wait for you all to see some more of Georgina as Janice Calavicci.”

Lee on Addison telling Ben, who lost his memory, that she was originally intended to jump and Ben was supposed to be her hologram: “It’s up to Addison to reveal what she can reveal because there are some things better left unsaid for Ben’s own benefit and health and well-being. She might know a reason why he would [make an unauthorized jump], but it might not be OK for her to tell me. But there’s so much to uncover there, so much drama.”

Hudson on his costar Lee: “He’s someone that you can relate to. Scott Bakula, what I loved about [him in the original], he was so funny and goofy and charming, but he was that guy you liked. He’d find himself in these situations, but it was hard not to feel for him, and I think Raymond has a lot of that as well.”

Gero on including Easter eggs throughout the series: “We’re trying to have a couple every [episode], and there’s some iconic props that eventually will make its way back into the canon of this show as well. This show is being made by fans of the original show, and it’s also being made by the people that made the original show, so that connection to the old show is very palpable.”

What did you all think of Quantum Leap’s first episode? Grade the premiere below, and then sound off in the comments.