Why? It’s a question that almost every baffling minute of Sia’s profoundly ill-conceived “Music” inspires you to ask in some form or another, often with a different inflection but always with the same urgency. Why did a mega-talented pop star cash in all her chips to make a movie that plays like an unholy cross between Zach Braff’s “Wish I Was Here” and Lars von Trier’s “Dancer in the Dark”? Why, against the advice of virtually every living human and the last vestiges of whatever common sense modern civilization has left, did she cast her able-bodied, neurotypical teenage muse Maddie Ziegler as the nonverbal autistic girl whose name lends the story its title? Why does the script feel like an inspirational Instagram post that was brought to life by a witch’s curse? Why don’t any of the film’s stultifying dance sequences even try to advance the plot or allow its characters to meaningfully express how they feel inside? Why do all of them look like rejected Target commercials from a dystopian back-to-school campaign that was commissioned for the kids in “Logan’s Run”? Why is Music’s sister called “Zu,” why does Zu appear to have a religious objection to wearing shirts, and why did the Golden Globes see fit to nominate Kate Hudson’s blandly well-intentioned performance for Best Actress — Musical or Comedy, when the film around her is barely Musical and tragic from start to finish?

The good news is that there are easy answers to most of these questions. For example: Zu doesn’t wear shirts because Sia clearly blew the entire makeup and wardrobe budget on Ben Schwartz’s cornrows (he plays a touchy-feely drug dealer), and the script probably feels like it was Human Centipeded together from 400 uplifting Instagram Stories because it was co-written by kid’s lit author and inspirational social media personality Dallas Clayton, whose first son with actress Shannyn Sossamon was famously named “Audio” (short for “Audio Science”). In light of new evidence, it’s safe to assume that name was his idea.

Another thing is apparent: Sia has always believed in magical thinking. It’s unclear if that’s a reason for her success, a direct result of it, or some combination of the two, but a shy girl from Adelaide doesn’t forge a path from Jamiroquai backup singer to global pop superstar and start worshipping a joke god called “Whatever Dude” because she sees the world for its supposed boundaries.

Her life and work have grown increasingly preoccupied with the transformative power of imagination; with the idea that we could all be infinite and loving if not for the bodies that keep holding us back. That explosive force is key to the inside-wants-out energy of bangers like “Breathe Me” and “Chandelier,” but it’s also baked into everything else. From the mega-hits she’s written for other stars, to her controversial decision to anoint a child as her pint-sized stand-in, to the face-obscuring wig she began to perform behind in order to preserve her privacy and buy some distance from her demons, Sia appears determined to dig a tunnel under the border wall that separates who we are and how other people hear us.

And so it’s easy enough to understand why she might have been so irresistibly drawn to a story about an autistic girl with an atypical relationship with sound itself — with a vivid mind but no voice to speak it. Squint hard enough and you can even understand how Sia convinced herself that said girl had to be played by an able-bodied, neurotypical actress who could balance “Radio”-worthy stimming with the demands of Ryan Heffington’s ultra-rigid choreography. Alas, that’s the problem with magical thinking: Get too enchanted by it, and you might just pave right over someone’s reality.

Even if it’s possible to understand how “Music” got made, and even if you accept that Sia’s blinkered approach began with good intentions, such generous allowances don’t make this tone-deaf debacle any less difficult to stomach. In part, that’s because Ziegler’s warm spirit is coated in an impenetrable layer of caricature. Vacillating between magical sweetness and self-abusive meltdowns with almost nothing in between, she’s constantly performing autism, and the dance scenes that punctuate the movie — ostensibly set inside Music’s head, though not even that much justification is given — remind us of that every few minutes. But Ziegler’s performance is also symptomatic of an even more severe dissonance. Casting an autistic person in the lead role and retooling the dance numbers to match their abilities may have been meaningfully empowering in some respects. It also would have triple-underlined the film’s dehumanizing approach to its heroine, and how eagerly “Music” reduces its namesake to a cheap prop in a dumb modern fairy tale about the able-bodied woman (Hudson’s Zu) who uses her as a catalyst for her own self-growth.

Music lives with her grandmother (Mary Kay Place, in some ways even sadder here than she was in the great “Diane”) in the kind of dingy and colorfully sweltering movie building where one of your neighbors is Héctor Elizondo, another is Leslie Odom Jr. (too sweet and winsome as Ghanian immigrant Ebo for this performance to “Norbit” his Oscar chances), and everyone pitches in to help Music keep her daily rhythm. Beto Calvillo is especially wonderful as Felix, the young man who lives in the apartment across the street, even if “Music” wastes so much time on its 10 songs that it can’t make space for any of its supporting characters. Especially Grandma, who dies so fast that it almost feels like a mercy killing.

Enter: Zu, Music’s estranged drug addict (and dealer!) of a half-sister who can barely take care of herself, let alone a 14-year-old with special needs. What a predicament. Zu’s first impulse is to call Child Protective Services and ask if they do “drop-offs,” and by this point the movie is already so out of touch with reality that you’re surprised when the woman on the other end of the line calls her out for that question. This is an impossible character whose shittiness is almost as hard to believe as her eventual transformation, but Hudson works Zu’s whole post-Goop “Tank Girl” aesthetic as hard as she can, and she gets to flex her lovely singing voice in the one scene where her director isn’t doing the honors for her entire cast (despite Sia’s undeniable talent, the ultra-forgettable songs she recorded for this movie betray that she never understood why she was writing them in the first place). 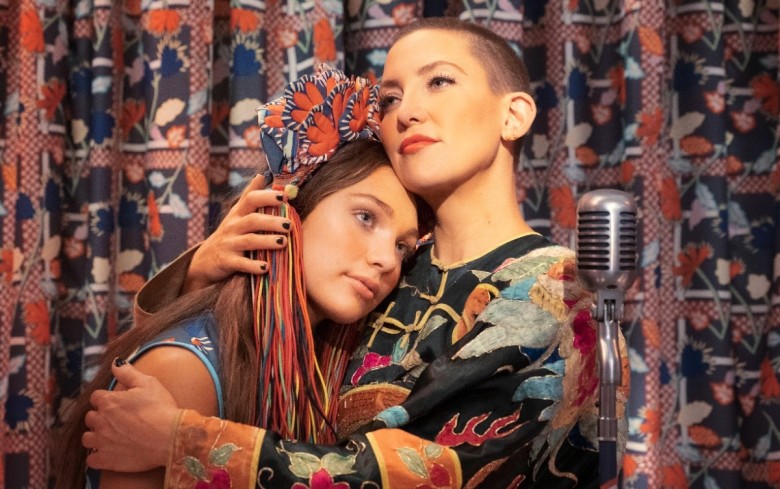 It’s impossible to overstate how little of a character Music is allowed to be — she’s not a person so much as a weatherman, her moods typically indicating how Zu and Ebo feel about themselves and each other in a given moment. “Music, I cannot imagine what you must be feeling today,” Ebo says after Grandma’s death (which Music barely seems to register), and the film takes that as permission not to even try. Sia has co-directed several excellent music videos in the past, and the results feel especially off-the-rack when compared to her usual vision.

At the same time, it feels like it all makes a certain kind of sense to her — at least more than it does to us. Zu’s unmotivated transformation, Felix’s encounter with domestic violence, the big finale that takes place at the wedding of a character we’ve never seen before and only heard about in passing… everything in “Music” is only held together by the kind of unrepentantly magical thinking that most people are never privileged enough to enjoy for themselves, let alone enforce upon others. Sentiments that make for perfectly anodyne song verses (e.g. “Humans, we’re so insecure, I think love is the cure”) don’t serve quite the same function as the bones of a story.

At least no one can accuse Sia of lacking the courage of her own convictions. It’s so fitting that her cameo is also the film’s most baffling scene, as the pop star — playing herself — buys a massive amount of Oxy and Percocet from Zu with plans to get around the red tape and use her private plane to fly them directly to Haitian kids in need. “Pop Stars Without Borders,” she says with a smile. That you wonder if she’s actually done something like that is a rare testament to an artist who’s never let the way things are cloud her vision of the way things should be; an artist who’s always been less interested in “why” than “why not?” Alas, “Music” is also the work of an artist whose inner voice has grown so loud that she’s lost the ability to hear anything else.

As new movies open in theaters during the COVID-19 pandemic, IndieWire will continue to review them whenever possible. We encourage readers to follow the safety precautions provided by CDC and health authorities. Additionally, our coverage will provide alternative viewing options whenever they are available.