Money Heist has kept viewers watching with baited breath as each season has escalated the drama. The final few episodes of season three were particularly tense, as the final heist almost fell into disaster. After a rogue sniper shot took down Nairobi (played by Alba Flores), the Professor (Álvaro Morte) escalated the situation to “Defcon 2”.

This prompted Tokyo (Ursula Corbero) and Rio (Miguel Herran) to grab the two large rocket launchers they had brought along.

As a tank came driving towards the gates protecting them, they had no choice but to take aim.

As they opened the gates, Rio and Tokyo fired fatal shots at the machine, leaving it in an explosive fireball.

The final shot of season three saw Tokyo collapsing after the realisation of what she had just done. 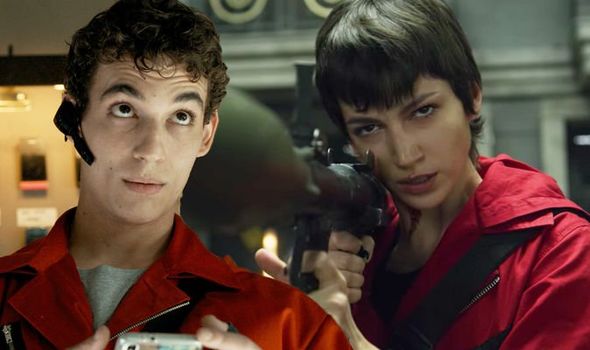 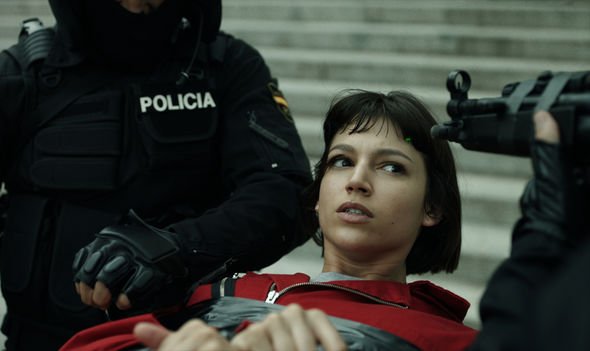 However, fans believe this final event could be the turning point for both Rio and Tokyo.

As the pair responsible for the heinous act of killing off the soldiers in the tank, they will surely be in the firing line from the Spanish government now.

And fans believe it is this event that will put Tokyo is grave danger, as she may be targeted first.

But it may be Rio who meets his bitter end, as Reddit user Clyprr explained. 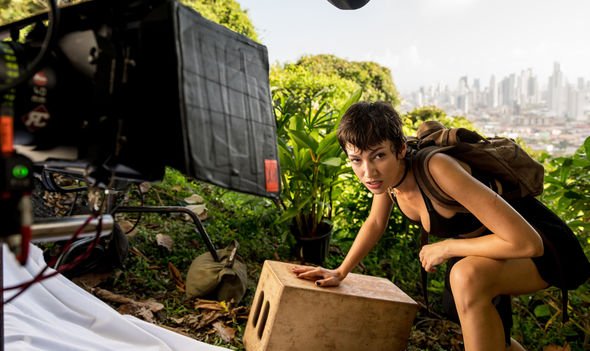 They wrote: “Now that season four is almost two months away I wanna know what you guys think will happen for the new season. Personally I think Rio will die protecting Tokyo and everyone else (Denver, Monica, Nairobi, Tokyo, el professor)will live.”

Although Rio and Tokyo share a sordid love-affair, it is plain to see that Rio is much more involved in the relationship that Tokyo is.

The fan goes on to suggest that Rio will somehow see Tokyo’s doom before she does, which will prompt him to save her, killing him instead.

This would obviously be a tragic event for the team, but they will no-doubt go on to complete their mission.

The user went on to add Helsinki (Darko Peric) will then go on to die, adding: “I think he’ll die and I don’t know why but Pamerlo will live because I don’t think they could make 3 psychotic characters.”

Another reason fans believe Tokyo will survive is because she is narrating the show.

In classic TV drama fashion, Tokyo has told the story of the House of Paper the entire way through the series so far.

They went on to suggest Tokyo narrating the show could in-fact prove her survival at the end of the series.

They wrote: “I think that since Tokyo is the one narrating that maybe she’ll be the last one left alive?”

If this is the case, could Tokyo in-fact be the only member of the team who survived?

Or simply the only member of the team who was willing to tell the story?

Money Heist part 4 is released on April 3 on Netflix.