Jimmy Kimmel ripped Sen. Mitt Romney’s “rough weekend” during his opening monologue on Monday’s “Jimmy Kimmel Live!,” showing footage of the Utah senator being booed by members of his own Republican party. But as much as the ABC late-night host enjoyed watching that fiasco, he liked former President Donald Trump’s attempt to mock Romney even more.

“Mitt Romeny appeared at the Utah State Republican Convention, where he was booed relentlessly by his fellow Republicans,” Kimmel said, before rolling tape of Romney barely able to speak because of how loud the boos were at the event. “I’ve never seen rude behavior from a group of Mormons before. It only went uphill from there,” Kimmel joked.

In the video, Romney can be heard asking the crowd “Aren’t you embarrassed?” when they become louder after he said he “wasn’t a fan of our last president’s character issues.” 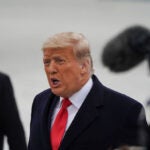 “No, they’re not embarrassed,” Kimmel said. “Like their leader, they are incapable of shame.”

Kimmel continued: “And of course, all of that was music to the ears of one Donald J. Trump, who released a statement — this is what he does now that he can’t tweet — he released a statement saying, ‘So nice to see RINO Mitt Romney booed off the stage at the Utah Republican State Convention. They are among the earliest to have figured this guy out, a stone cold loser!’”

Because Trump had to send this dig via press release Monday rather than on Twitter, due to his permanent ban from the social media platform in January, Kimmel promised to make sure to get it to Romney.

“Thanks for the memo, Don. We’ll make sure to fax that to Mitt,” he joked. “And why are Trump’s losers always ‘stone cold’? Do they have to be kept at a certain temperature like the vaccine or something?

Watch Kimmel’s full segment via the video above.