Jeremy Jordan does double duty in Hallmark Channel’s upcoming “Love Ever After” romance, Mix Up in the Mediterranean, playing twins Josh and Julian, who — through a comedy of errors — are forced to switch places at a prestigious rising chef competition in Malta and keep up their ruse. Also starring 90210 alum Jessica Lowndes, who plays successful event organizer Meg and whom Josh begins to develop feelings for (as he pretends to be his twin brother), the movie’s other central relationship features a gay couple, Julian and his husband, Henry (played by Callum Blue).

A newer addition to the Hallmark family, Jordan credited his experience on last year’s holiday film, Holly & Ivy, which co-starred To All the Boys: Always and Forever‘s Janel Parrish, as “converting” him to a believer of the network’s signature romantic comedies.

“A lot of times we go into these things with preconceived notions and we make assumptions about what things are and it’s nice that, for me at least, Hallmark is starting to break the mold,” the 36-year-old actor tells ET, adding that Mix Up was instantly a draw for him because it spotlights a happily married gay couple. (One of the central storylines in last November’s The Christmas House featured a gay couple hoping to adopt.) “With one of their first gay characters and storylines, I really wanted to be a part of that if I could. I’m definitely beginning to see the real draw and the effect that these movies can have on people, especially having done a couple now.”

Jordan discusses channeling his best Parent Trap to play twins, filming on location in Malta amid a pandemic and whether he may be popping back in as Winn for one final hurrah in Supergirl‘s upcoming final season.

ET: You mentioned the LGBTQ representation was a significant determining factor for you to come aboard. Why did you feel you wanted to at least play a small part in progressing that forward?

Jeremy Jordan: I’m from the theater community and for someone like me, and for most of my friends, something like that in the movie that we’re depicting is everyday life for us. I have an incredible amount of LGBTQ+ friends and relatives, family members, and I see them underrepresented in all forms of media. Hallmark has been one of those in the past. When they had that Christmas movie [The Christmas House], we were excited to see them making that shift because traditionally, Hallmark has been “family-friendly.” And the idea of what a common and normal family is shifting all across America. People are starting to have a view of what life looks like outside of their bubble and beginning to accept it a lot more. Hallmark taking this step is huge, I think, because it’s tapping into an audience that might not see that as much on their television or may not choose to watch some of those programs, and I think they’re doing it in a really healthy way. I really loved this particular project because the LGBTQ representation is Julian and his husband, Henry, who are the happiest couple and they love each other and they have a super healthy relationship. It’s not anything that is foreign to your average American, it just happens to be two guys. It’s a really good stepping stone for them and I was very fortunate to get to be a part of telling that story.

You’re playing twins, which is something you’re familiar with from your time on Supergirl. But was there ever a point where you thought, “How are we going to pull this off here?”

I was excited! I had played twins once before on Supergirl. There was an episode where I met my alternate universe evil twin, but it was nothing in comparison to this because these are two real human beings who are grounded and have their own set of issues and subtleties. And so, I had to try to create two people that were very different but also real and looked exactly the same. That was a fun challenge. But the part that got me excited is that they have a whole Parent Trap scenario where they are pretending to be one another and that is where all the fun lies. You have Josh pretending to be Julian and trying not to overdo it, less he fully offends his brother. Then you have Julian, who doesn’t care if he offends his straight brother, Josh, and acts like a complete fool when he’s trying to put on his bro voice. It was a fun set of dynamics to work. It was a little confusing and every day on set, the hair and makeup people were furrowing their eyebrows and wrinkling their foreheads, being like, “Who are you? Are you Josh? Are you Julian? Are you Josh as Julian? Are you Julian as Josh? Are you just dressed as Julian but you’re actually acting as Josh right now?” And I’m like, “Guys, I got this.” I had to take stock of where I was at all times. It invests you a lot more in the movie because they’re all my scenes, pretty much, in some regard and I have to take ownership of them from multiple angles and it was fun.

So you didn’t have a flow chart to keep things straight?

Oh my god, I wish I was that Type-A but I’m not! It was all inside my brain. I went by the skin of my teeth and I never had any major hang-ups. There were never any moments where I’m like, “I’m doing this scene as the wrong character.” The good thing about being in film is you have to switch your costume, you have to switch your makeup and all that. Every time we do that, it gives me a moment to center myself and get in the mindset of who I’m pretending to be next.

There are so many layers to the relationship dynamics between Josh, Julian, Meg and Henry. There were scenes between Josh, who’s pretending to be Julian, and Meg where it’s both awkward but also sweet.

Yeah, and then the weirdness on her part of like, “Why am I getting vibes from this guy? He’s married and not into girls. Or maybe he is into girls.” She doesn’t know. And so, she’s like, “Maybe? What’s going on here?” Truly a mix-up. 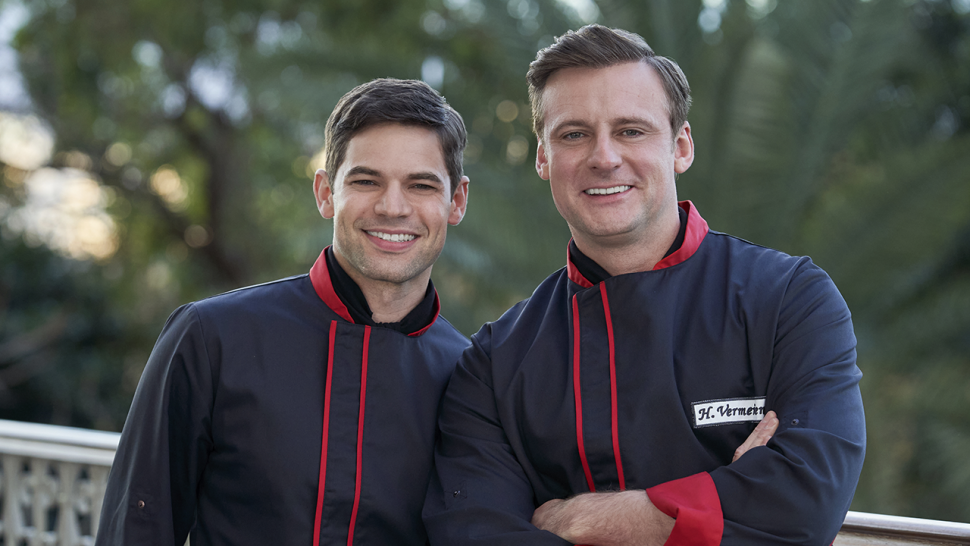 Food is a big part of this movie. Are you into cooking or pride yourself on creating dishes in the kitchen?

I wish I could say I knew anything about cooking. I know slightly more about cooking now. Slightly. Most of the stuff we were doing was faking it for our live shots. Or, they would show us something to do and we’d be like, “We’re going to do exactly what you just did.” During the past year, I’ve had a little bit more time and my wife and I, we tried delivery meal kits. I have cooked more than I’ve ever cooked before in my life in the past year, but I am still far from being a chef. I am a big fan of saying, “Hey, let’s get takeout! No dishes.”

You filmed this on location in Malta. Were there any highlights from your time there?

I’d never been to Malta before. It’s this gorgeous island filled with history over centuries and you see it everywhere you go. It felt like I was in a different era and it was cool to be in that kind of environment. It helps you get in the zone with filming as well. But yeah, it took me out of my standard run-of-the-mill, everyday routine at home. The people there are really lovely and the food there was some of the best food I’ve had, probably ever. I had a pasta carbonara that was the top three things I’ve eaten in my entire life. We were working six-day weeks, so we had one day off and I tried to make the most out of it. There’s a place called the Hypogeum, which is apparently one of the oldest man-made structures known to man. They uncovered it a hundred years ago; it was this underground monolith that’s 6,000 years old. So, it was really, really cool to go into that and feel the energy. We got to see a couple of things but just being in Malta, it feels like you’re transported.

Switching gears to Supergirl. Since it is wrapping up, have you had conversations about possibly coming back one last time?

Yeah. You know, I’m certainly open to it. I haven’t had any talks about it as of yet. I know it’s a little bit difficult because they film in Canada and the travel situation there is a little bit involved, we’ll say. But at the moment, no, I don’t think Winn’s returning for the final season. Although, if the opportunity arose, I’m sure I wouldn’t hesitate to go out and hang out with my friends one last time.

What will you miss most about your time on that show?

I’ve been away for a couple of years now and just the people, honestly. I made some of my best friends on that show and I fell in love with the character of Winn. And it was something that I got to really create and stick with for the longest I’ve ever had to stick with one character. So, when I got to come back for season 5 for a few episodes, it was really lovely and really liberating. Unfortunately, I left the show because I wanted to come back home and start a family, which is what we did. And so, I don’t regret it for a second but I do think back fondly and miss those guys a lot.

Circling back to this movie, what do you want people to take away when they sit down and watch this weekend?

It’s one of those movies that is a little bit of a moment for Hallmark, so I want them to really take that aspect of it in and see that achievement and hopefully begin to get on board with what they’re doing and speak up for more of that. Hopefully, they’ll want more LGBTQ+ representation because that is, I think, a big thing that I’ve always advocated for in my life. And I just want them to have a great time. I want them to laugh as much as possible and get excited to be able to go on vacation, hopefully, one of these days too. It’s a nice escape for people and it’s a lovely story about family acceptance, love and good food.

What else do you have coming up?

I’m working on a couple things that I’m not really able to talk about yet. But one thing I will plug is that my co-star, Jessica, and I found that we were both songwriters and decided to write a song together, inspired by the movie. We wrote it kind of late, so I don’t think they were able to put it into the movie. But we’re going to release it on Saturday, the same day as the movie. A duet called “Alive” that we wrote. It’s a cute song and people can listen to it and be excited for the movie. I’ve written music for a long time and I’ve certainly sung on a lot of recorded albums but I’ve never put out anything that I helped write. So, this is sort of a big deal for me.