EXCLUSIVE: Sabrina Spellman lives on—sort of—in the new Archie Comics and Roberto Aguirre-Sacasa series The Occult World of Sabrina which will pick up where Netflix’s Chilling Adventures of Sabrina left off in its series finale cliffhanger. Sabrina may have welcomed death, but someone close to her is plotting to bring her back.

The source comic book series that inspired the Kiernan Shipka-led drama will also move forward in time in Chilling Adventures of Sabrina #9 with Aguirre-Sacasa at the helm, set to debut on Oct. 13.

Both tales involve a Witch War, so does that mean the respective storylines could converge at some point? Aguirre-Sacasa discusses the theory exclusively with Deadline and what fans can expect when they dive into each new tale.

DEADLINE: After the cancellation of the Netflix series, fans were left hanging after a major cliffhanger. Did you plan it that way?

ROBERTO AGUIRRE-SACASA: When I got word we weren’t doing any additional parts or seasons we had already suspected four would be the last part, so we really wanted to go out with a bang. We had Sabrina sacrifice herself to save her family, her friends, her town. On the other hand, we didn’t know definitely so we did end on a cliffhanger. I finished editing the finale at the beginning of the pandemic and pitched a possible part five to Netflix which would’ve produced Archie, Betty, Veronica, Jughead, and all the Riverdale characters as witches and there would’ve been a witch war between the witches in Greendale versus all of these witches and warlocks in Riverdale. Netflix was excited about that idea but due to the pandemic, it didn’t feel possible.

DEADLINE: Did the story end to your satisfaction?

AGUIRRE-SACASA: One thing Netflix asked me to do, which I happily did, was to cut a scene from the last episode after we knew the show was ending because they didn’t want to give fans false hope that the story would continue. The scene was one of my favorites. I cut it because I knew what they were saying but it was a little bit like a dagger to my heart. What plays out is that Sabrina’s aunt Zelda (Miranda Otto), who had had dealings with the voodoo god of death, Baron Samedi, shakes a bag of bones and he appears to her. He says, “I didn’t think you’d be contacting me so soon.” And Zelda says, “There’s been a terrible mistake. It seems that my niece Sabrina is dead and we need to bring her back to life.” So the cliffhanger was going to be Sabrina’s family trying to pull her back from the afterlife.

DEADLINE: Had you given up on the idea of continuing the story in some way?

AGUIRRE-SACASA: About two months ago, I reached out to [Archie Comics CEO/Publisher] Jon Goldwater and told him that Sabrina is going to eventually come back. We’re going to find a way to continue with Kiernan, but in the meantime, what if we bring back the comic book? He agreed. Then we were torn between moving forward with the original comic book the show was inspired by and its timeline or picking it up from the events of the show’s finale. I told Jon there would be unhappy fans either way, so why not do two series with each following their respective timelines. He said, “Great idea, let’s do it.” 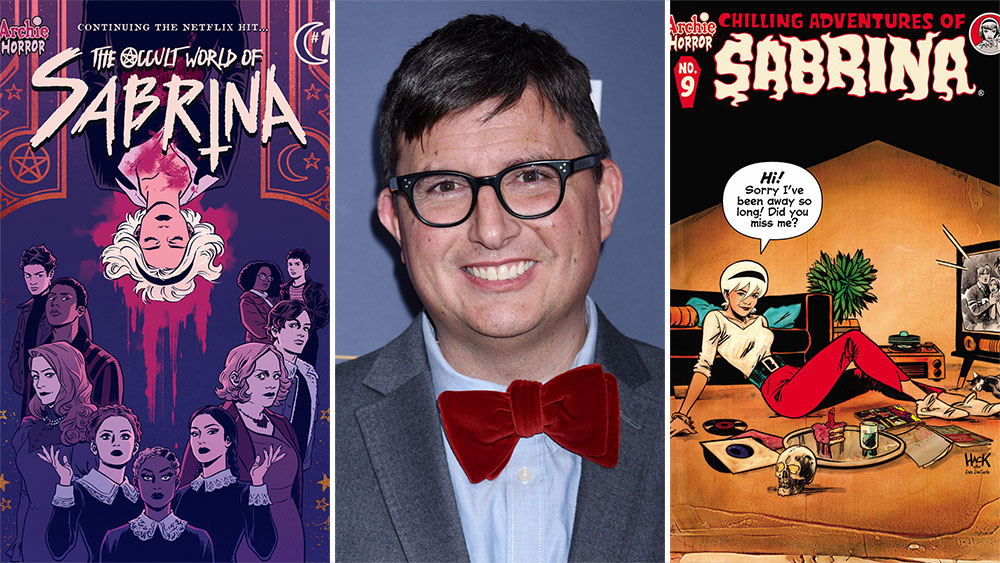 DEADLINE: The Occult World of Sabrina, set to be released later this year, is the continuation of the streaming series. Where will that story begin?

AGUIRRE-SACASA: The scene that we shot and had to take out of the Netflix series with Zelda is the exact scene verbatim that’s in the first issue of The Occult World of Sabrina. When we start that series, it’s exactly as it ended in the Netflix series with Sabrina and Nick in the sweet hereafter and her family and friends in Greendale are trying to live in a world without Sabrina. In fact, that’s the name of the first story arc: “World Without Sabrina.” We’ll see how her loved ones have been doing since Sabrina sacrificed herself. The first thing Zelda does is recruit a team of their family and friends to go into the underworld to bring Sabrina back to life.

DEADLINE: As you’re fleshing this out, are you thinking of expanding this into a new series or a film in the future?

AGUIRRE-SACASA: We’re always thinking in those ways. There’s a hold on the character now, I think for two years, and that window has already started. My plans are to work on the comics and build up that library with the hopes that one day we can do a standalone movie or hopefully bring back the series. I feel like right now this is like the research and development stage of the next iteration of Sabrina. I was really bummed that the fans weren’t able to see Sabrina reunited with her family and friends which was the heart of the show. But I’m hopeful that with different circumstances in the future, we’ll be able to do a live-action Sabrina to continue.

DEADLINE: What can you tease about Chilling Adventures of Sabrina #9 and whether or not the streaming series affected the events in that story?

AGUIRRE-SACASA: We left that comic book series in the middle of a storyline also called Witch War. The crux of that story was that Sabrina’s boyfriend Harvey had been killed by the coven and she tried to resurrect him. But thanks to Madam Satan’s meddling, she resurrected Harvey’s body but with the soul of Sabrina’s evil father. Sabrina thinks Harvey is back from the dead but it’s really her father back to get revenge on his sisters Zelda and Hilda who originally banished him. In the Netflix series, it’s Sabrina and Nick who are dead, and in the original comic book version, it’s Harvey that’s dead. It’s interesting to compare and contrast because there are some themes that overlap but the storylines are very different. The comics are much darker and more f—ed up than the Netflix series, the latter of which is more aspirational and focuses more on the teens and is more like Riverdale.

DEADLINE: So both stories are taking place during witch wars. Is there a point where the stories will converge?

AGUIRRE-SACASA: We’re saying we’re launching with these two comic book titles almost as if there’s this Sabrina multiverse where there are multiple versions of these characters. I will say we have talked about them crossing over and of course, we always have the option to bring in the kids from Riverdale. For the first arc, we’re going to finish the war in Chilling Adventures of Sabrina and finish the “World Without Sabrina” storyline in The Occult World of Sabrina and there isn’t going to be any crossover. But I wouldn’t be surprised if we do a big crossover in the near future.

This interview has been edited and condensed for length and clarity.