Spoiler alert! Do not proceed if you have not watched Thursday’s two-hour season premiere of Grey’s Anatomy. Watch the emotional promo for next week’s episode.

Grey’s Anatomy lived up to its billing when it teased that the season 17 premiere would have a “shocking, jaw-dropping ending.” That “shocking, jaw-dropping ending” came in the form of the stunning return of Derek Shepherd, aka McDreamy, Meredith’s late husband, who died in a season 11 episode following complications from a car crash. The surprising return of Patrick Dempsey, whose last episode (up until this point) aired in April 2015, in the final seconds of the premiere was a true shock to fans.

After Meredith (Ellen Pompeo) was found unconscious in the Grey Sloan Memorial Hospital parking lot amid the grueling toll coronavirus was taking on her mental, emotional and physical health, viewers were transported to the beach. Meredith, dressed in all white, stood ashore. Then, moments later, a second figure appeared from afar. Who is that? It was Meredith’s late husband, Derek, played by Dempsey.

Showrunner Krista Vernoff explained how the big Grey’s surprise came to be, saying that McDreamy’s presence was meant to bring happiness to long-standing fans of the series.

“From a writer’s perspective, it happened because it was my job to find a way — once we determined that we were doing the pandemic — to also bring joy, and escape, and fan candy, and all the things that at Grey’s Anatomy we give people,” she told Deadline. “We give them romance, and we give them humor, and we give them joy, and a lot of that is lacking for the medical community in this pandemic. And so, I was walking on the beach one day, and I was like, what if there’s a Meredith dream motif?” 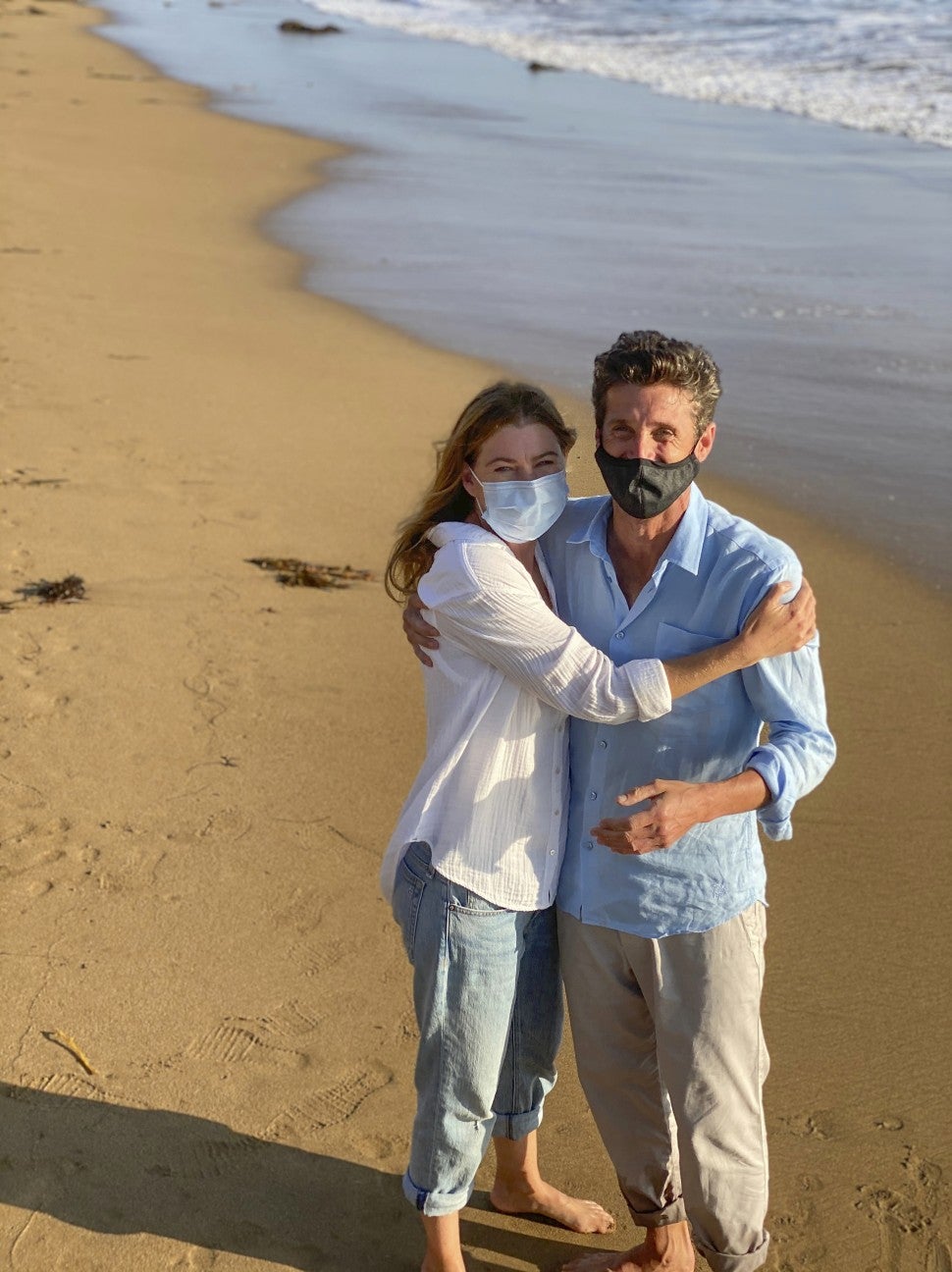 “I had this imagining of a beach motif throughout the season, and I called Ellen, and I said, what if we bring back, I don’t know, some dead character that you could dream of on the beach, that would be so fun for the fans,” Vernoff shared.

It was actually Pompeo who suggested the idea of resurrecting Derek. “Even in my most excitable dream life, that thought hadn’t occurred to me as an option, and there it was,” Vernoff said.

Pompeo and Dempsey, who both live in Malibu, California, took a hike together near their homes, and it was during that walk that the Grey’s star broached the idea of Dempsey coming back for a small arc.

“The idea just struck me so I just said to him, would you ever consider coming and being a part of the storytelling this season?” the actress and producer recalled, referencing Dempsey’s cancer foundation in Maine, where he helps cancer patients and cancer survivors. “There’s just so much darkness, and we knew that coming together would be a little ray of light. And so, I think we had the same idea, at the core, to want to help people and bring a smile to people’s faces. So, he loved the idea, and we were just so excited, and we had a ball filming it.”

“We hadn’t spoken or been together for a while. It was a great opportunity to catch up and say, ‘OK, what can we do for all the frontline responders?'” Dempsey said. “I’ve been tracking what Grey’s had been doing with giving masks, and making sure that people had the right equipment, and it came from that place. ‘OK, what can we do to make people feel better, to give some comfort in this time of uncertainty,’ and that’s how it began. And it was really a wonderful experience to go back, to work with [director/EP] Debbie [Allen].”

Added Dempsey, “The whole atmosphere has changed, certainly working at the beach, and seeing everybody again was really a very healing process, and really rewarding, and a lot of fun. And hopefully, that feeling translates, and the fans enjoy it. I know that they’ve been wanting us to get back together, and I think this will satisfy a lot of people, and surprise a lot of people, hopefully.” 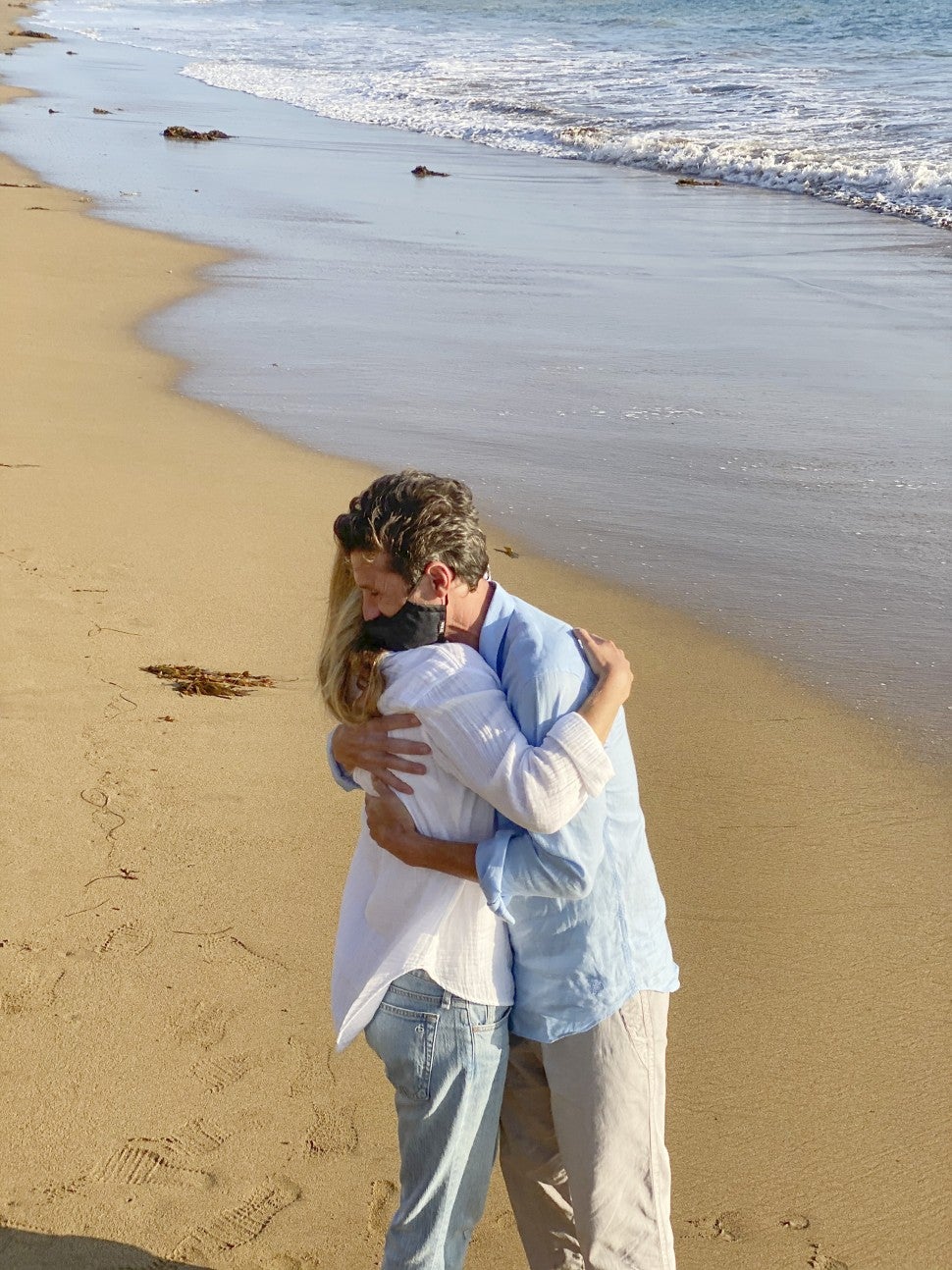 And Dempsey’s time on the show isn’t done. The former regular also returns in next Thursday’s episode, titled “My Happy Ending,” which was directed by Kevin McKidd.

“It was great. It was really fun, very special. It felt really comfortable, incredibly safe,” Dempsey said of reuniting with Pompeo one more time. (And yes, they filmed the scenes together.)

“It felt great,” Pompeo said. “Patrick and I have this chemistry, where I think, even from when we first met, for some reason it just felt like we’ve known each other for a hundred years, and it’s just the same feeling. It’s like riding a bike, we just have a chemistry and a dynamic that’s always served us well, and I think we have a genuine affection for each other. And it was very healing to come back, and know that we’re doing something good, putting out a positive story, a healing story, going to make people smile, and I think, for me, I’m really grateful for the opportunity to be able to be at this place in the show where we can do this.”

Now that Dempsey is back for at least one more episode, he left the door open for future returns.

“Yeah, it was fun, because I really love the message of what the dynamic is in this story,” he said. “With everything that we’re dealing with right now, and certainly we have been distracted with the election, but we’re going to get back into the reality of COVID and being in a pandemic, and all the lives that have been lost. Where are these souls going? And I think that’s what attracted me to this storyline, I think it can be really helpful and healing to so many people.”

Here is Vernoff’s statement to ET on Dempsey’s return to Grey’s: “The most important task we had this season was to honor the reality of this global pandemic and the impact it’s having — particularly on health care workers. Along with that we had to come up with creative ways to allow our show to still be fun and romantic and provide some escapism. Enter Patrick Dempsey. The beach motif — which will continue beyond the premiere — provided a way for us to live outside the pandemic even for a little while here and there. And Derek’s return provided pure joy for us, for Meredith, and for the fans. Season 17 has been a Herculean effort by our cast, our crew, our writers, and our partners at Disney and ABC — and we are proud of it. But our effort is nothing compared to the work of our frontline health care workers to whom this season is dedicated. We hope our show inspires you to wear your masks to protect them and each other. As Derek Shepherd would say, ‘It’s a beautiful day to save lives.'” 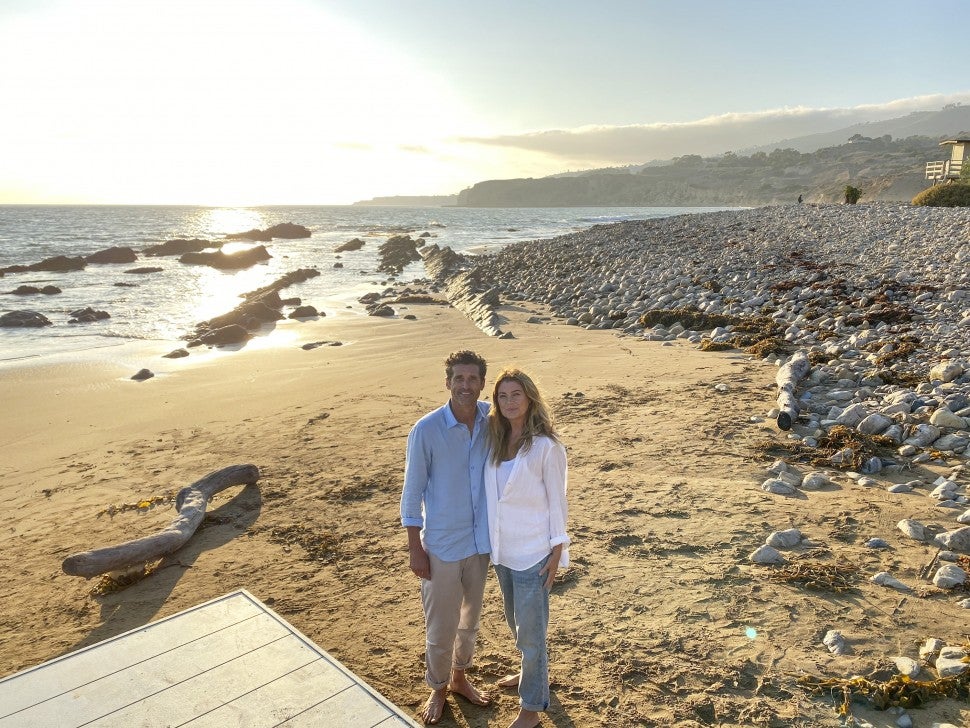 11/13/2020 TV & Movies Comments Off on How 'Grey's Anatomy' Pulled Off Its Season 17 Premiere Surprise
Recent Posts
We and our partners use cookies on this site to improve our service, perform analytics, personalize advertising, measure advertising performance, and remember website preferences.Ok