The opening minutes of “Honeyland” are as astonishing — as sublime and strange and full of human and natural beauty — as anything I’ve ever seen in a movie. A woman makes her way on foot across wild meadowlands and up a mountainside, carefully stepping along a narrow ledge to a rocky outcropping, where bees have made a hive. Without much protective gear, and apparently without being stung, she extracts several honeycombs and secures them in a sack.

Back home, in the valley — she is one of two permanent residents of a hamlet in what is now called the Republic of North Macedonia — she transplants the colony to a stone wall near her house. In the coming months, she sings to the bees and talks to them, explaining the terms of their relationship. When the time comes to take the honey, she’ll leave half of it for them. It’s not a bargain, exactly, since the bees have no real say in the matter, but it is a sustainable arrangement, and one that has survived in this region for generations.

The woman, Hatidze Muratova, is an actual beekeeper, and “Honeyland,” directed by Ljubomir Stefanov and Tamara Kotevska, is a documentary about her life and labors. Originally commissioned to make a video about conservation efforts in Macedonia, the filmmakers spent three years with Hatidze; her mother, Nazife; and the late-arriving people next door. (More about them shortly). As a result, Stefanov and Kotevska have done more than record the rhythms and textures of rural life. They have shaped their observations — more than 400 hours of footage — into a luminous neorealist fable, a sad and stirring tale of struggle, persistence and change.

Hatidze, born in 1964, lives with Nazife, who is bedridden and partly blind; a hound named Jackie; and those industrious bees. It’s an austere existence, but it has its satisfactions, and Hatidze isn’t entirely isolated from the rest of the world. Skopje, the Macedonian capital, is only a little more than 12 miles away, and she travels there, on foot and by train, to sell her honey. Because of its superior quality and her shrewdness, it fetches a good price. She uses the revenue to buy household goods, including dye for the graying hair she wears tucked into a kerchief.

Just as you are settling into Hatidze’s company, appreciating the edges and contours of her personality and savoring the deep pleasure of her work, the pastoral calm is shattered. A family rumbles into the village in a noisy trailer that turns out to be the quietest thing about it. The patriarch, Hussein, and his wife, Ljutvie, bring chickens, cows and a small army of children. At first, Hatidze welcomes these neighbors, who are Turkish speakers like her. She tutors one of the older boys in the mysteries of the apiary and tolerates periodic invasions of her privacy from the littler ones.

Though she is too courteous to say so, you have the feeling that Hatidze views Hussein as a man who may have overestimated his abilities. He has a habit of blaming other people — Ljutvie and their children, mostly — for his misfortunes and mistakes. His plan is to herd cows and keep bees, turning this empty patch of territory into a literal land of milk and honey, at a scale sufficient to feed his family and his ego. 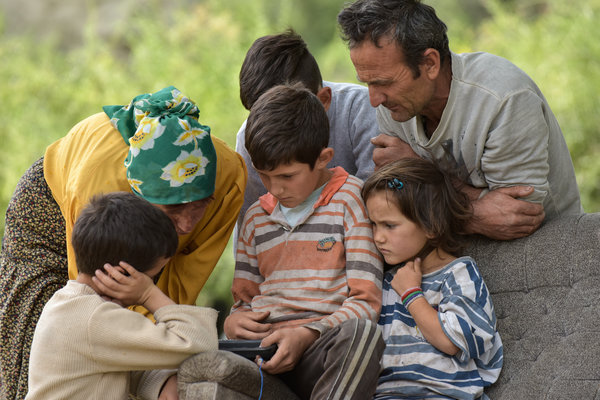 Hussein is not exactly a villain. He’s doing his best. But his crude methods, his sandpapery personality and the sheer chaos that surrounds him conspire to disrupt Hatidze’s routines. As relations between them deteriorate, “Honeyland” touches on what may be a universal feature of modern experience, familiar to urban apartment dwellers and house-proud suburbanites, as well as to old-school agrarians. The Rolling Stones wrote a song about “groaning and straining with the trouble and strife.” Neighbors are a nightmare.

But the presence of Hussein and his unruly household is also serendipitous, a gift from the gods of film narrative. This isn’t to attribute the filmmakers’ remarkable achievement to luck. They draw comedy and pathos out of the conflict. They render the thick complexity of experience with poignant clarity. Their movie is quiet, intimate and intense, but touched with a breath of epic grandeur. It’s a poem including history.

And one that regards the future with both apprehension and hope. Hatidze seems to be the last of her kind. Hussein’s rapacious exploitation of scarce and fragile resources represents the norm, supported by a crude utilitarian argument. Their struggle feels like a microcosm of the human predicament at a time of environmental catastrophe, and Hatidze, precisely because of her modesty and patience, looks like a heroic figure, offering a warning and an example to the rest of us, her wasteful, wanton neighbors.

It may be a strange thing to say about a documentary, but “Honeyland” reminded me of “The Lorax,” Dr. Seuss’s great, prescient tale of ecological folly. Like the title character in that story, Hatidze is a kind of prophet. She speaks for the bees.

When you purchase a ticket for an independently reviewed film through our site, we earn an affiliate commission.

A.O. Scott is the co-chief film critic. He joined The Times in 2000 and has written for the Book Review and The New York Times Magazine. He is also the author of “Better Living Through Criticism.” @aoscott

07/25/2019 TV & Movies Comments Off on ‘Honeyland’ Review: The Sting and the Sweetness
Recent Posts