Sarah Drew is peeling back the curtains on how her Grey’s Anatomy return came to be.

The former series regular came back for Thursday’s episode to provide closure for Jackson and April’s story, as well as to send Jesse Williams off as he prepares to leave the long-running medical show in his final episode on May 20. In the hour, the former couple had a heart-to-heart about where they stood and what they wanted to do with their lives, with the pair making the decision to move to Boston and leaving the door open for a romantic reconciliation.

“I got a text from Krista [Vernoff] saying, ‘We got an idea for a Japril episode for this season. Would you like to hear us out?’ And I was like, ‘Yeah.’ She had [writer] Meg Marinis call me and pitch this whole idea and I was like, ‘It sounds like Jesse’s leaving.’ And they said, ‘Yes.’ I was just really excited to get to be a part of his departure, just that relationship — both between the two of us but also the Japril relationship is so meaningful to both of us,” Drew said Friday morning with a handful of reporters, including ET, over Zoom. “It just felt like the perfect time to come back and do a special episode to be able to help Jackson make his big departure. I was honored to do it.”

It’s revealed in the episode that April’s marriage to Matthew, whom she wed in the season 14 finale, didn’t last. Though April and Jackson still have a ways to go, it seemed apparent that the natural next step for the fan-favorite duo was to, one day, give their relationship another go. Asked whether she believes they are ultimately endgame, Drew gave an answer that will make fans happy.

“I am deciding that they are. I think we’re leaving it up to the audience to come to whatever conclusion that makes them happiest. But I’ve never been shy about wanting Japril to be endgame. It’s what I’ve wanted the whole time,” she admitted. “One of the biggest heartbreaks about me leaving in season 14 is that they didn’t get to be endgame. That was one of my biggest heartbreaks. Who knows what happens when they make their way to Boston. I think there’s a great deal of hope that’s there.”

Naturally, with April back in the Grey’s orbit — even if only for an episode — fans were clamoring for more with their favorite couple, even throwing out ideas for potential spinoffs on social media. Drew was all for a Japril spinoff and even pitched her own idea that would follow them on their adventures in Boston.

“Yes! I mean, you guys, how cool would that show be?” Drew said excitedly. “I gotta be honest. I’ve been on Twitter and Japril was, I think, trending worldwide all day. It was absolute insanity. When I read the script, even just going on set to get my COVID test before we started shooting it, running into crew members and they were like, ‘Oh, we thought this was a spinoff.’ It feels like it’s setting up for a really great journey. And I was like, ‘I know.’ How amazing and needed is a show about racial justice in the medical field and inequity and equality. How amazing would that be?” 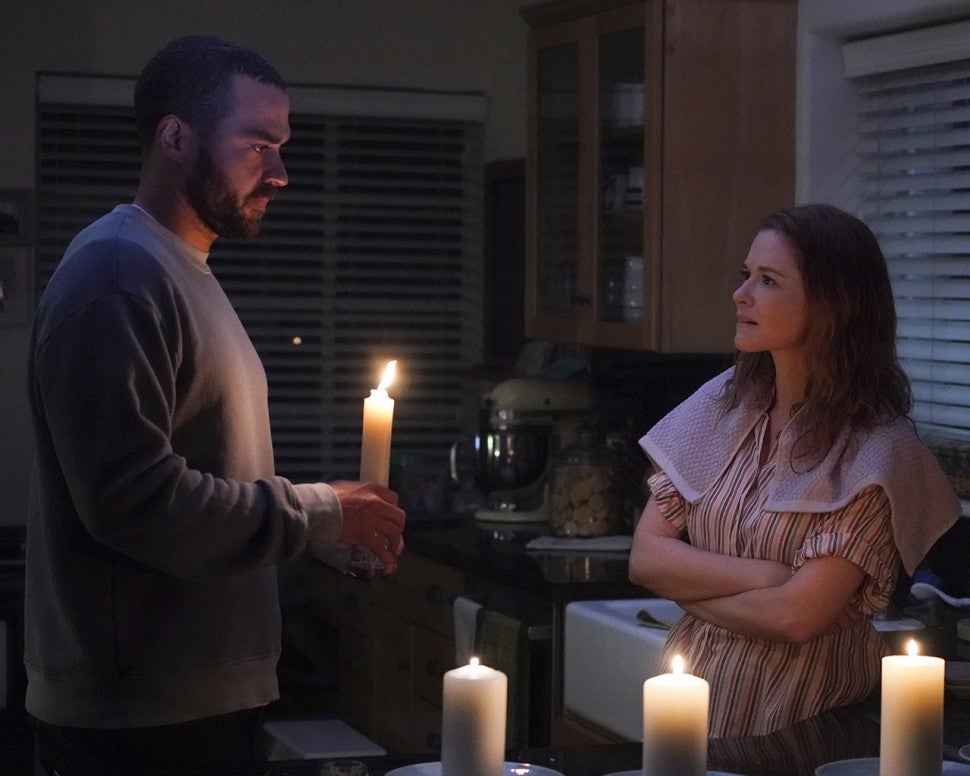 “I gotta say, I got so fired up watching the episode last night because Jesse Williams just freaking killed it. His passion for all this stuff shines through in his performance so beautifully and brilliantly. But I just kept thinking like, ‘How cool would this couple be? Him working from the position of having money and power to be able to make that change. And she’s working with folks experiencing homelessness and she’s also doing that in her own way.’ These two could change the world of medicine, right? I’d watch that show,” she said.

For Drew, this episode righted the ship in many ways with regard to the ending April received in her final season 14 episode.

“It was such a beautiful experience. I feel like there was this lovely full-circle conclusion that felt so good in my heart and in my body, combined with going back on set and feeling so loved and so missed,” she reflected, sharing that she was able to catch up with Ellen Pompeo, Chandra Wilson, James Pickens Jr., Camilla Luddington, Caterina Scorsone and others while on set. “It was such a sweet homecoming in so many ways. To get to do an episode like this, to really close out these characters, it always felt like how it was always meant to be.”

As for why Jackson and April didn’t share a kiss during their reunion, Drew had a perfectly reasonable explanation.

“You’re asking what everybody is asking… We weren’t even supposed to have any — there wasn’t even supposed to be a hug, there wasn’t supposed to be a hand grab. Those two things happened on the day between the two of us. He’s like, ‘I love her. I would reach out to her. I would grab her hand to make sure she’s OK.’ When I say love, I mean there’s a lot of love between the two of them… And I pitched the hug. I was like, ‘We gotta give them a Japril hug, just we have to,'” Drew revealed, sharing that there were conversations at one point about both a hug and a hand hold being too much.

“I think a kiss, it would’ve been too much. I love how it leaves the audience hoping and wanting more, and drawing their own conclusions. It would be a little intense if she drops the bomb that her marriage is over and then five seconds later, they’re making out,” she pointed out. “I know that’s what a lot of fans wanted but I’m just saying there’s tenderness there about all of the things he’s asking her to do. She’s uprooting her life, they’re about to go on this epic journey. You’re going to need to take some time, if that’s the direction they’re going to go back in. It would’ve been too much. I’m glad we held it back but I understand the desire.”

Grey’s Anatomy airs Thursdays at 9 p.m. ET/PT on ABC. For more, watch below.