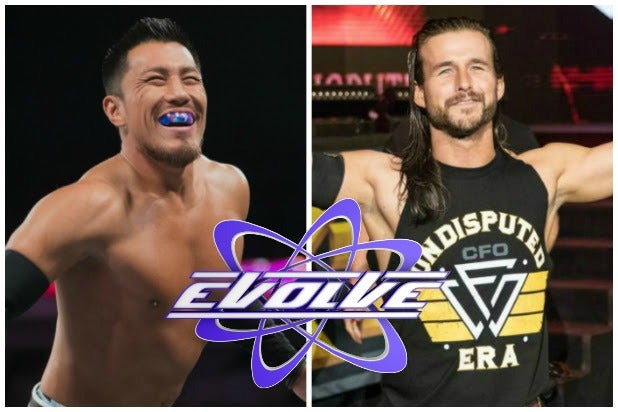 Making the special event extra special, Adam Cole (pictured above, right) will defend his NXT Championship against WWE Superstar Akira Tozawa (above, left) on the show. They are both Evolve alums, though Tozawa’s time there technically came before it was rebranded into its current incarnation.

“Evolve’s 10th Anniversary Celebration” will also feature a match between fellow Evolve alums Matt Riddle (currently in NXT, which is WWE’s minor leagues) and WWE Cruiserweight Champion Drew Gulak. That one is a non-title match.

Additionally, NXT Superstars Arturo Ruas (formerly Adrian Jaoude) and Babatunde, Evolve Champion Austin Theory and the promotion’s Tag Team Champions Joe Gacy and Eddie Kingston are also all set for action. Additional matches will be announced in the near future.

“Evolve was the birthplace for many current WWE and NXT Superstars so it is only fitting that their 10th Anniversary Celebration will be showcased live on WWE Network,” Paul “Triple H” Levesque, WWE executive vice president of talent, live events & creative, told TheWrap.

Yes, that’s the same date and start time for new competition All Elite Wrestling’s (AEW) “Fight for the Fallen” event. That one will livestream on Turner’s (so, WarnerMedia’s) B/R Live service.

Vince McMahon’s World Wrestling Entertainment and Evolve formed a relationship in 2015, one which allowed WWE to scout the smaller league’s talent for both its NXT brand and, eventually, its main roster. It appears to be both working out and mutually beneficial.