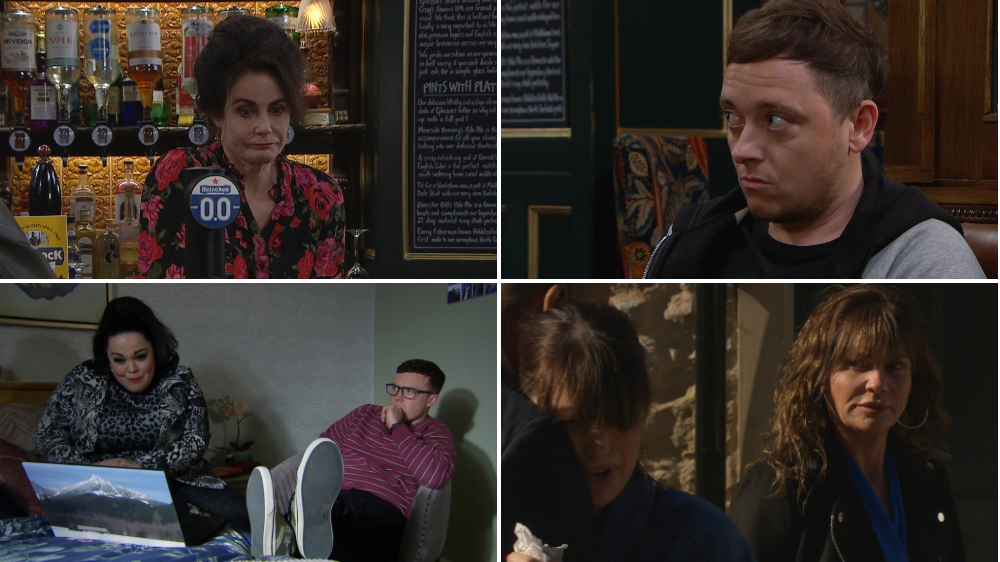 Emmerdale village sees emotions running high in next week’s episodes as Moira Dingle (Natalie J Robb) is rocked to the core by a request from dying Faith Dingle (Sally Dexter).

Faced with a life changing decision, will Moira help Faith to die – and will she keep their conversations a secret?

Elsewhere, the evils of Sandra Flaherty (Joanne Mitchell) come to fruition as she makes her final move against Liv (Isobel Steele). Is her daughter set to lose everything?

Faith’s relieved Moira hasn’t told Cain about her plan to end her own life but she is still seemingly determined for Moira to help her at the end. Moira, however, is resistant.

When Faith’s health takes another downward turn Moira is troubled to see she is running out of time and later Faith’s overwhelmed when Moira relents and agrees to be by her side at the end. Torn Moira sobs and hopes she’s made the right choice.

There is trouble at Home Farm as Dawn’s frustration over Millie’s lies simmer. Harriet does her best to stifle her feelings for Will while he is struggling to hide his resentment over Kim having thrown Dawn out. When Millie is collected by Hazel, Kim realises how alone she is.

Vinny’s stunned to see a ‘FOR SALE’ sign outside Mill Cottage as Liv and Sandra unexpectedly arrive back from holiday. Vinny’s frustrated as he questions Liv on her decision to sell the house without him.

Sandra’s happy knowing her plan to cause trouble is working. Liv and Vinny’s bickering intensifies after her return from Spain. Vinny’s deeply hurt when Liv tells him he’s dragging her down. Sandra smiles as the wedge she’s building between them grows.

April’s pleased to have banter with Arthur as a secret crush forms.

Moira’s awkward when Cain’s insistent on planning hospice care for Faith knowing she won’t need it. Faith plans a day of fun for everyone but the atmosphere is tarnished, due to Chas and Cain’s persistence with the chat about planning for the hospice. Faith’s guilty of her deception.

Alone, Moira asks Faith to share her plans for her death, but Faith replies that she can’t do that as it will implicate her as assisting suicide is a crime. She is insistent that she wants to be able to choose the moment and have some control over her death. Moira’s terrified by the reality of what she’s agreed to.

Breakfast at Home Farm is a frosty affair as Will stews over Dawn’s refusal to attend their wedding. Kim bites her lip and goes to apologise to Dawn. But will it work?

The next day during a clandestine meeting outside the village, Terry and Sandra’s scheme picks up momentum.

Vinny’s shocked when Mandy insists it is actually Sandra who is responsible for his fallout with Liv and Mandy has a plan for revenge. Later, Vinny apologises for his behaviour and Liv’s chuffed with his change of heart as they agree to all move to Spain together.

Chas receives a message from Al asking to meet whilst Faith plans a day of fun.

Mandy recruits Jimmy into the plan to take down Sandra. And keen to get started, Jimmy feigns an interest in buying the house.

Vinny and Mandy listen in as they record her response, hoping they’ll catch her slipping up. But when Liv discovers Mandy and Vinny were trying to set her mother up she is furious and kicks Vinny out..

The next day, Lydia senses a tense atmosphere between Will and Kim and Kim offloads her worries to her friend Lydia. Later, although Will and Kim reconcile – Will’s still worried whether the wedding should go ahead.

Noah’s pleasantly surprised when Kerry suggests a job opportunity, believing she’s offering an olive branch. But Noah and Amelia see the job offer for what it really is; a ploy to get rid of Noah.

When he rules out fighting for his marriage, Mandy’s heartbroken for Vinny. Meanwhile, Sandra comforts Liv.

Later, in the Hide, Liv faces temptation when Sandra makes a show of how difficult it is to stay off alcohol.

Once back home, Sandra feigns upset but is secretly thrilled to see Liv has fallen off the wagon. Soon drunk Liv lets slip about her ever-growing savings account, so Sandra plys her daughter with more alcohol with her eye on robbing her account.

The next day, Kerry convinces Dan to help her break up Noah and Amelia. Soon Charity is involved. But could Kerry’s plan backfire?

The next day, Harriet reminds Will if he goes ahead with the wedding, he may lose Dawn. Once back at Home Farm, Kim’s furious Harriet has been interfering in her relationship and goes to Harriet and threatens her to end this interference.

Matty’s uncomfortable when Suzy tries to chat with him. When Suzy later turns up at Holly’s remembrance do, Matty’s forced to hide his resentment. Noticing how grateful Moira is when Suzy asks to pay her respects, Matty hides a flicker of regret. Can these two build bridges?

Harriet tells Will how she was threatened by Kim and reaffirms her love for him. Has Harriet’s done enough to cancel the wedding?

Back at Home Farm, Will’s horrified Kim’s now excluding some of the wedding guests from attending and starts to wonder what he sees in her…

Over at the Woolpack, Paddy knows he’s in the dog house as he heads back to work leaving Chas run off her feet at home. Therefore, she’s grateful when Cain offers to look after Faith and Eve for the day.

As various dramas unfold throughout Emmerdale, the village edges closer to breaking point.