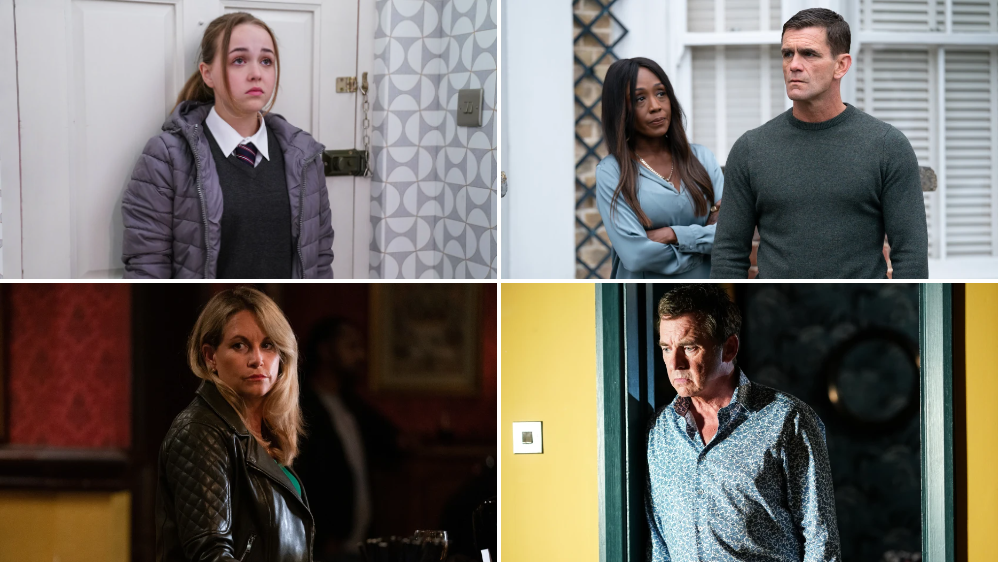 Alfie Moon (Shane Richie) is gunning for trouble in next week’s EastEnders – quite literally.

When he is carjacked by an armed criminal, things spiral out of control, and soon he will be in danger after he takes a costly risk.

Elsewhere, Jack Branning (Scott Maslen) is at the end of his tether with Amy (Ellie Dadd) continuing to fall deeper into crisis.

When Sam Mitchell (Kim Medcalf) then drops a bombshell, everything then gets much worse.

But it’s not all bad news, as there might be a hint of romance in Whitney Dean’s (Shona McGarty) life.

Ricky blanks Sam when she tries to make conversation, angry she neglected another school event. Jack arranges a belated birthday dinner for Amy, who refused to leave her room on the day itself.

Sam wants to blag an invite to build bridges with Ricky, but Denise tells her she’s not welcome.

Later, Amy ends up arguing with Nugget, Denzel and Lily about the rumours swirling about her. Denzel tries to follow her to make amends, but Amy brushes him off.

Sam arrives at the Branning house with a dress to give Amy to secure a dinner invite and uses her old set of keys to get inside. Heading upstairs, she walks in on Amy and is shocked by what she sees.

She initially rushes out but soon returns. In The Vic, Jack is annoyed that Amy is a no-show, but she finally turns up with Sam in tow, hoping the dinner invite will buy Sam’s silence.

However, later Sam accosts Jack in the gents’ toilets and tells him about Amy. They realise Amy is at the door and has heard everything.

Alfie tries to reassure Kat that he’s got everything under control at home. To keep the boys busy, Alfie challenges them to guess the code to Phil’s safe, and together they work it out.

They find serious cash inside, but Sam turns up and Alfie hurries the boys to put the money back. Later, Alfie is juggling problems at the cab office but needs to get to the shops to buy Tommy a zombie video game.

When Mitch’s cab breaks down, Alfie drives Vi to bingo instead and has just enough time to get to the game shop. That’s until a masked gunman jumps into his cab.

With Chelsea away, Finlay and Felix are determined to throw a party, but Whitney is initially not convinced; when the boys mention that Zack is looking for love, and promise to do all the cleaning up, Whit has a change of heart.

Patrick has some words of wisdom for Denzel, who is struggling to cope with the unfolding situation with Amy and the gossip. Howie wishes he could reach through to his son as easily as Patrick.

Keith, the masked gunman, has just robbed a building society and demands that Alfie be his getaway driver. However, Alfie takes a risk and drives to the shop to get Tommy’s game anyway.

After a successful purchase, Alfie’s luck takes a nose-dive when Stacey calls and reveals the Moon boys have told her all about the safe game.

Keith’s ears prick up to hear the safe contains £30k, and he orders Alfie, at gunpoint, to take him to Phil’s place.

Glammed up Whitney is waiting for Zack to get to the party. He arrives with another girl, Mandy, and can’t understand Whit’s reaction until Felix gives him the heads up. Finlay consoles Whitney with a pep talk, and she moves in for a kiss.

Jack is hurt when Amy tells him to stay out of her life, as Denise begs him to tread more carefully.

Jack and Denise go to Amy’s school to talk to Mrs Larkham about Amy’s problems. Jack is fixated on Denzel and wants to know if Amy’s changed since he arrived, a line of questioning Denise tries to shut down.

At the salon, Kim can see something is up with Denise, who tells her the truth. As they are talking.

In The Vic, Jack confronts Howie and demands Denzel stays away from Amy. Things get heated, and Jack punches Howie just as Denise and Kim walk in.

Denise tries to calm Jack to no avail and he lashes out, making it clear that Amy is his daughter, not hers.

In the cab office, Alfie is interrupted by Freddie, who gives him an idea.

Later, Honey orders him off the market, ruining his plans. Back at no 55, Alfie tells Tommy about Phil’s missing money and is amused when Tommy offers to sort it out for him.

In the Minute Mart, Zack is frustrated that Whitney doesn’t seem bothered about him. Felix and Finlay baulk at the prospect of having to clean up after the party as promised.

Whitney is impressed when they do, and Felix can see she is putting up a front regarding liking Zack.

With the internet down, Patrick and Howie convince Denzel to play dominoes to pass the time.

The conversation turns to Amy, and Denzel talks about his complicated feelings. Kim breaks the mood by storming in to turn the router back on, and Denzel realises the men tricked him.

Alfie tries to persuade Mick to ‘invest’ in a food festival, but he declines, and so does Bobby.

Whit heads to The Albert with Felix and Finlay, who convince her not to give up on looking for love.

When Zack arrives and makes an attempt to Whitney her over, Whit agrees to a drink at the Vic.