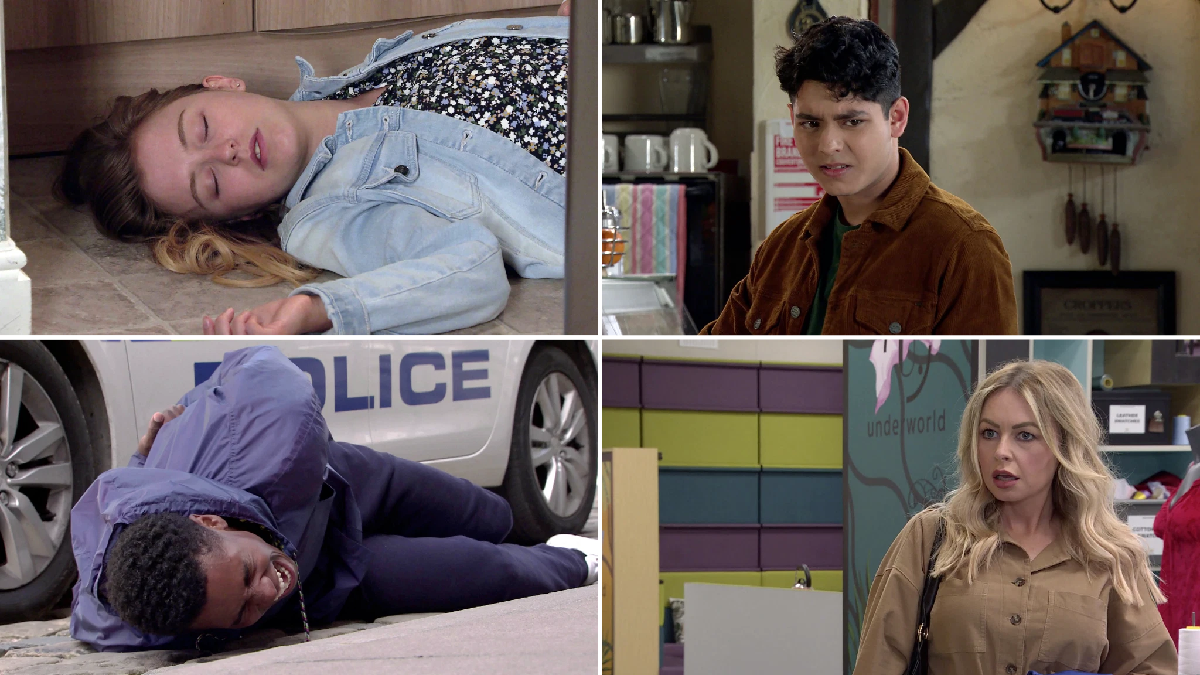 Tensions and violence are running high in Coronation Street as James Bailey is subjected to a racist police attack while Summer Spellman collapses after pushing things too far with her diabetes.

Elsewhere, Kelly Neelan is brutally betrayed by her selfish mum Laura but an arrest soon follows.

Michael and James test drive a sports car after James is offered £30,000 for his interview. A police car pulls them over and when James questions the officer as to why, the officer arrests James for obstruction and handcuffs him. James trips and injures his leg.

Craig comes round the corner to see James in agony and Michael is convinced they’re victims of an unprovoked racist attack. In the hospital, James is convinced his career is over.

Alina asserts that Tyrone’s jealousy over Fiz is humiliating. Hope overhears Fiz and Tyrone rowing in the furniture shop. She demands that she needs both their help with her school project.

Aadi finds Summer in the café and casually tries to flirt with her.

James returns home on crutches. Michael tries again to persuade James to make a complaint, but he refuses.

Michael and James are shocked to discover that someone filmed their arrest and posted the video online. James accepts they should make a formal complaint to the police.

Toyah and Imran make it clear to Laura that if she sells Kelly’s story to the papers, they’ll report her to Social Services. A police officer arrives at the factory and arrests Laura on suspicion of child cruelty. Laura blames Toyah and Imran but who really was it?

Billy and Todd reveal that Nina is going to design a bespoke groomsmaid dress.

Hope works on her school project, but when she includes Phill in her picture, Tyrone becomes jealous and Fiz is amused.

Billy tells Mary they’ve booked their wedding for five weeks’ time. Summer lets slip that Todd gave Billy £1,000 towards the halfway house. Will realises that Todd ripped him off.

As Will lists all Todd’s crimes and reveals the lengths he went to in order to split up Billy and Paul, Summer’s horrified. Summer confronts Todd.

Determined to expose Todd, Will sends a video to Paul. As the locals gather in Victoria Garden for the calendar launch party, Paul swaps the laptop for his own.

Having introduced the film, Emma presses play on the laptop. To Todd’s horror, the film turns out to be an incriminating video of him telling Will how he successfully split up Billy and Paul.

PC Brody confides in Craig that James and Michael have lodged a formal complaint about the arrest and accused him of racism.

Toyah and Imran visit Kelly and assure that she might not have her mum’s support, but they’ll be there for her every step of the way.

Billy stares at Todd in utter disgust before heading off.

On the street, Billy, Summer and Paul watch as Todd is arrested for theft and led away.

In the police station, PC Brody sidles up to Craig and asks him not to mention the fact that he thought James’s driving was fine and didn’t warrant being pulled over. What will Craig do?

Grace reveals that she has re-launched the website to include the baby-grows and suggests she and Michael go upstairs.

Mary explains how the calendar launch never took place and they ended up watching Todd’s confession instead. Emma and Curtis are touched to see Steve, Tim, Dev and Chesney have gone to the trouble of advertising the calendar in their windows and declare the day a success after all.

Kelly describes her childhood to the social worker, explaining how her mum would be violent towards her and then go missing for days.

Hope accuses Tyrone of spending all his money on the new baby and nothing on her.

Billy and Summer agree that they did the right thing reporting Todd to the police. Summer and Aadi chill out together in Victoria Garden.

When Aadi offers her a fruit cider, Summer is convinced that one bottle won’t upset her blood sugar.

Having found out from Aadi that Summer went home feeling unwell, Todd kicks the door in and is horrified to find Summer unconscious on the kitchen floor.

After spending the night together, Grace is loved up. In the hospital, James wakes from his operation.

Fiz meets Phill for lunch. At No.9, Evelyn assures Fiz that Hope is fine but in the backyard, Hope rips the head off the baby’s teddy and stuffs it in her backpack.