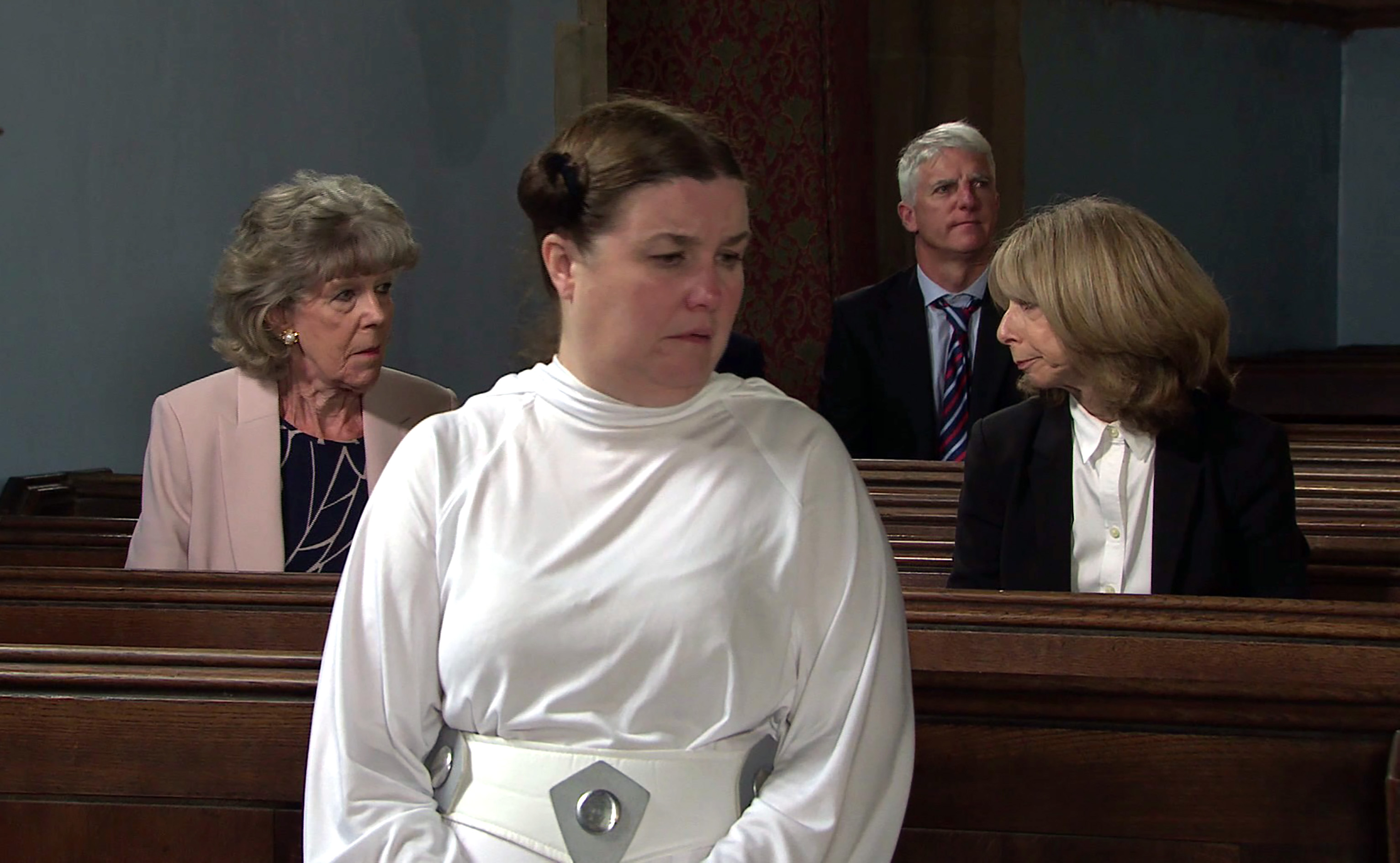 It’s the end of an era in Coronation Street as residents gather to say a final farewell to Norris Cole (Malcolm Hebden) and as Rita Tanner (Barbara Knox) makes an emotional eulogy, Norris soon distracts them all with one final secret.

Elsewhere, David Platt (Jack P Shepherd) and Daniel Osbourne (Rob Mallard) clash outside of the classroom and things get even more intense as a career hangs in the balance.

Burying her doubts, Alya accepts Zeedan’s loan of £50k. But when Zeedan launches an attack on Ryan for cheating on Alya, she’s furious, pointing out that Zeedan was nowhere to be seen during Geoff’s reign of terror and telling him to shove his money.

Yasmeen plans a family meal but outside Speed Daal, two thugs grab Zeedan. Elaine and Cathy are horrified to discover Zeedan slumped in the ginnel, battered and bleeding.

Sharon visits Kelly and tells her not to worry about money as somebody made an anonymous donation to fund her case. Kelly’s heart leaps, convinced it must be her dad, proving he’s still alive. When Mia spots Sharon, she pales. Kelly explains Sharon works for her dad. Mia’s horrified to realise she’s Rick Neelan’s daughter.

George shows Freda the Order of Service for Norris’s funeral. When Freda points out that he’s got Norris’s date of birth wrong, George is mortified.

When Daniel offers to give Summer some pointers with her Oxford Uni application form, she’s delighted. But when she asks if he could give her some extra tuition for the entrance exam, he feels obliged to turn her down.

Kelly confronts Mia and demands to know what her problem is with her dad. When Mia reveals that Rick is the reason she’s locked up and her mum’s dead, Kelly’s stunned.

Kelly asserts her dad’s now living in Spain and paid her legal fees but Mia’s not convinced, telling Kelly she reckons someone’s done away with him. Kelly calls Gary and demands he come and tell her the truth about her dad.

At the hospital, Alya and Simon quiz Zeedan about his attackers. Zeedan tells them that he has no idea who they were. Having witnessed their earlier row, Simon wonders if Ryan was responsible.

Zeedan gives a statement to Craig and suggests Ryan might have been his attacker. Furious, Ryan tears a strip off Zeedan for trying to frame him when he was working all afternoon. Zeedan comes clean to Yasmeen and Alya, explaining he’s in trouble.

When Freda learns that Gemma’s gone to the hospital to meet other mums whose kids have cochlear implants, she struggles to hide her annoyance. Gemma assures Freda that after the op, they’ll still maintain links with other deaf people.

Daniel relents and offers to help Summer with her uni application.

When Bernie asserts that Aled will be “normal” once he’s had his operation, Freda’s hurt. With Gemma stressed, Freda offers to take Aled for a walk. But when Bernie and Chesney discuss the “hassle” of attending deaf groups and how they want Aled to “talk properly and fit in”, she’s further upset.

When Freda doesn’t return, a panicky Gemma confides in Roy that she fears she’s taken Aled.

Yasmeen asserts she doesn’t want Zeedan’s money and is ashamed of his behaviour. Zeedan apologises to Ryan for wrongly accusing him, revealing Alya still thinks a lot of him. Ryan’s hopes are lifted. Yasmeen lays down the law to Zeedan, she’ll accept his loan but he must remain under her roof where she can keep an eye on him.

When David queries Max on his lack of homework, Max makes out they give him less because of his ADHD. David checks out Max’s story with Daniel.

When Daniel remarks it’s a pity Max doesn’t use his brain for his school rather than making a mug of his dad, David’s narked. Seeing Daniel let Summer in for her tutorial, David strides over with Max and tears a strip off Daniel for favouritism.

As Grace packs to leave, she hands Ed a list of things she wants done around the new house, claiming if he doesn’t sort it they won’t see Glory again. Aggie fumes.

Kelly demands to know where Rick is and Gary squirms.

Gail arrives back from Thailand and Audrey’s thrilled to have her daughter home.

As Gemma asserts they need to find Aled and get him to hospital before he misses his operation, an emotional Freda is in the community centre with Aled, showing him a website dedicated to successful deaf people.

When Freda sees Gemma at the window, she signs that she’s busy. Enlisting the help of the interpreter, who’s arrived to discuss Norris’s funeral plans, Gemma does her best to get through to Freda but she refuses to hand Aled over.

As Chesney arrives, will they be able to get Freda to come out before it’s too late?

As David complains about Daniel’s favouritism towards Summer and suggests that given his history with Bethany, he probably fancies her, Max listens with interest.

In school, Max makes a dig at Daniel, likening his relationship with Bethany to that of Romeo and Juliet. When Daniel’s wallet then goes missing from his jacket pocket, he’s quick to suspect Max.

On the street Daniel orders Max to empty his pockets. As Daniel makes a grab for his jacket, David storms over, wanting to know what’s going on.

As the mourners gather in church for Norris’s funeral, Audrey hands round a hip flask of tequila. As Mary takes a huge swig, Gail watches with concern. After Rita delivers a heartwarming eulogy about her best friend, Billy reads a letter left by Norris. Freda and Mary are touched by his words.

After teasing that the paperboy outside The Kabin contains a secret, Norris finishes by revealing that Rita used to surreptitiously have her hair coloured by Claudia. Audrey rounds on Rita for her betrayal.

Ed and Aggie bemoan the fact Grace has got them over a barrel, but they’ve little choice if they want to see Glory again.

Norris’s wake takes place but the mood is ruined by Audrey and Rita’s row. Outside The Kabin Mary, Ken, Gail and Brian gather to unlock the secret Norris hid inside the paperboy.

When they can’t get it open, Mary returns with a chainsaw and decapitates the paperboy. What secrets lie inside?

James is keen to celebrate his return to fitness with a family meal in town but Aggie asks if they can celebrate at home as Ed’s tired out. Aggie rails at Grace for working Ed into the ground for free, meaning they can’t afford to go for dinner with James. Danny clocks their exchange.

Daniel angrily informs David that Max stole his wallet. In a bid to prove his innocence, Max empties the contents of his schoolbag onto the pavement.

David warns Daniel he’s not heard the end of this, but Shona criticises David for blindly defending Max. Having witnessed the row, Daisy tries to calm Daniel down, warning he’s risking his career with no proof of Max’s guilt.