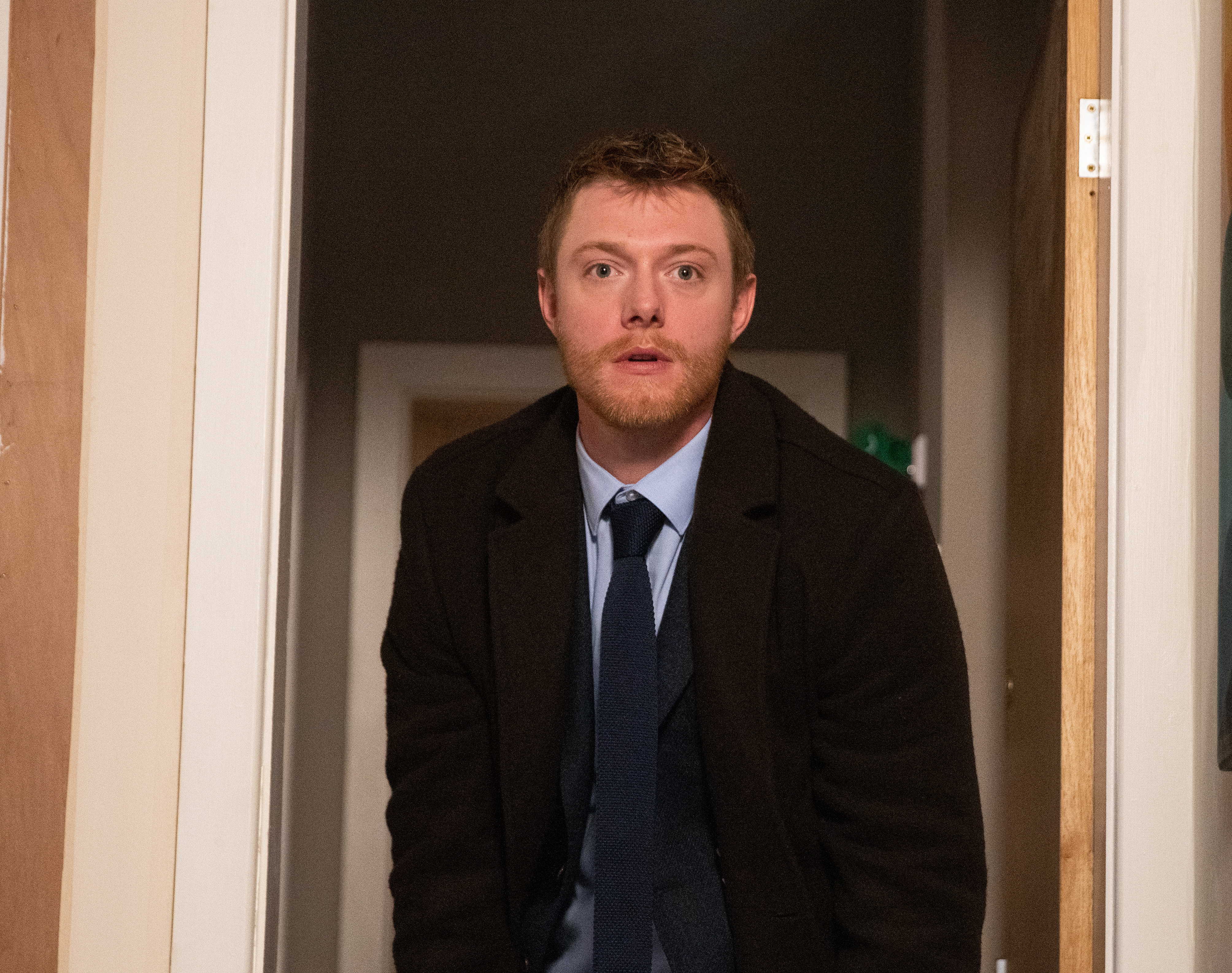 There is fresh tension between Daniel Osbourne (Rob Mallard) and Max Turner (Paddy Bever) in Coronation Street. As their feud escalates, things take a violent turn; leading to Max lying at the bottom of the stairs.

Elsewhere, as pressure mounts on Craig Tinker (Colson Smith) as he continues his investigation, Faye Windass (Ellie Leach) is running out of options.

And Rita Tanner (Barbara Knox) and Audrey Roberts (Sue Nicholls) are getting on like a house on fire – but not for long!

An upbeat Fiz tells Evelyn that Hope’s therapist reckons Hope’s recent antics were just those of a naughty girl and nothing more sinister. Evelyn’s not convinced.

Lydia suggests to Daniel that he should use the workshop to teach the boys about the history of feminism, Daisy’s disparaging.

Daniel is pleasantly surprised when Max arrives and suggests that the reason he turned up for the workshop was because of David. When Max quizzes David about Daniel’s earlier comment, David’s unease is evident.

Sally and Elaine fuss over Tim and when Elaine presents him with a little servant’s bell to ring if he needs anything, Tim’s in his element.

Asha confides in Aadi and Summer that she wants to apply to Glasgow University but worries that it’s too far home and she doesn’t like leaving Nina when she’s so vulnerable.

Elaine fusses over Tim, but it’s clear she’s getting on Sally’s nerves. When Tim reveals that Elaine’s going to stay until he’s fully recovered, Sally bites her tongue.

When Asha reveals that she’s having second thoughts about Glasgow University, Dev suspects that it’s because she doesn’t want to leave Nina.

Tyrone braces himself and suggests to Fiz that there’s more to Hope’s behavioural problems than they first thought and it’s time they got a proper diagnosis.

David apologises to Max. In the shop, Dev places the keys to Daniel’s flat on the counter and while he’s distracted, Max swipes Daniel’s keys. Max lets himself into Daniel’s flat and sets about smashing the place up, accidentally breaking a clay imprint of Sinead’s, Daniel’s and Bertie’s hands.

Daniel returns home to discover his flat trashed with Max emerging from the bedroom. When Daniel discovers the broken clay imprint, he shoves Max out of the door. Max trips and tumbles down the stairs. Daniel stares at Max’s seemingly lifeless body and calls an ambulance, will he be okay?

As Daniel comes out of his flat, an officer explains that he’s investigating what happened with Max Turner.

Beth overhears Faye enquiring about a job at the factory for Craig. She’s shocked to learn that he has resigned from the police force and later confronts Craig, demanding to know why he’s quitting.

Craig assures Faye that leaving the police force was his choice and he’ll talk to Sarah about the job in packing tomorrow.

As Dev sets off for Daniel’s flat to take a look at the leaky sink, he hands Asha a guide book for Glasgow. Having spotted the prospectus in Asha’s bag, Nina puts on a brave face and encourages her to enjoy a day out in Glasgow.

Having ascertained that there are floods expected in Glasgow, a panicky Nina shares her fears about Asha’s train journey with Roy.

Dev presents Bernie with chocolates and flowers and apologises for failing to believe her side of the story.

Kelly finds Liam struggling with his French homework. Picking up Liam’s football, she teaches him to count in French, however they accidentally knock over a bottle of water, soaking Maria’s portfolio.

Maria returns home to find her portfolio ruined. Liam confesses to Maria that he’s to blame for the ruined portfolio.

As Audrey heads home from the shops after buying Sam’s new school books, Shona comments on the clanking of bottles coming from her shopping bag. Gail arrives home to find Audrey with a glass of wine and when Sarah suggests that she has been drinking all evening, she takes offence.

Adam tells Sarah that he’s taking her to the Bistro for her birthday and has bought her a smart oven as a present, Sarah’s utterly underwhelmed and storms off.

Still fretting over the mishap with the portfolio, Kelly overhears Maria moaning to Gary that she has reached the end of her tether. Kelly skulks away, failing to realise Maria was actually complaining about Sally.

Audrey complains to Gail and Shona that nobody trusts her with anything anymore. Shona suggests Rita has a night out before urging her to ask Audrey to do her hair. Rita’s dubious but agrees.

Daniel maintains Max tripped by accident. David accosts Daniel in the street and accuses him of lying. Lydia intervenes, while Daisy watches with concern.

Daisy calls at the shop flat to check on Daniel. But when she admits she thinks he’s hiding something, Daniel gets defensive.

Daniel and Daisy hurl insults at each other, but Daisy admits she wants Daniel and they kiss. They leap apart as Lydia enters.

Asha calls in at the cafe to see Nina before setting off to Glasgow but Nina pockets Asha’s phone. Asha’s shocked to find Nina has taken her phone. Nina refuses to let her go to Glasgow. Asha is alarmed when Nina locks the cafe door to stop her leaving.

Rita persuades Audrey to put their quarrel to bed by giving her a hairdo. Audrey’s relieved when Rita clocks her bottles of wine but merely asks for a glass.

Audrey and a freshly-coiffed Rita getting on famously, Shona smugly takes the credit. But when Audrey bridles at being set up, Rita’s patience snaps and, with a parting shot about her daytime drinking, she flounces out.

Mrs Crawshaw summons Daniel to the school and accepts that he didn’t push Max.

Mrs Cranshaw invites Daniel to apply for a permanent post at the end of his placement. David and Shona are outraged.