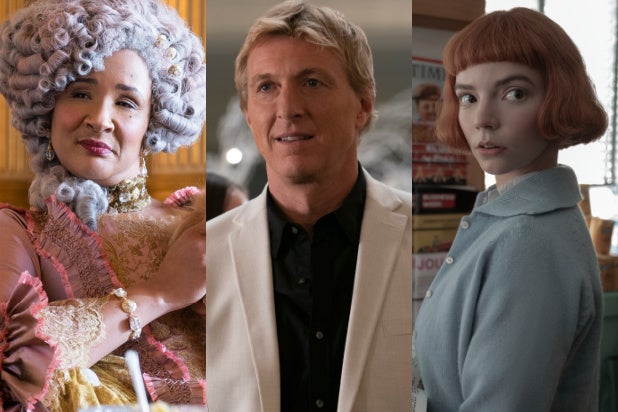 Netflix is projecting 41 million member households will have watched at least a small portion of “Cobra Kai” Season 3 within its first 28 days. The season launched on Jan. 1, so we’re not even halfway there yet.

For a recent comparison, “Bridgerton,” which launched on Christmas, is projected to surpass 63 million households within its own first four weeks. The Shondaland drama had the advantage of debuting earlier than “Cobra Kai” over the holiday break.

Limited series “The Queen’s Gambit,” which bowed on Oct. 23, was seen in 62 million households within its first 28 days. “Cobra Kai” Season 3 numbers came closer to those for “Ratched.”

Of course, all of those comparisons we just referenced are for brand new series. “Cobra Kai” is in its third season, but this is its first as a Netflix original. The “Karate Kid” sequel series previously streamed on YouTube’s paid platform.

“Cobra Kai” Season 3 has reached No. 1 overall on Netflix in 28 countries and reached the Top 10 in 85 countries, according to the streaming service. Between all three seasons thus far on Netflix, 73 million households have watched some of “Cobra Kai.”

Netflix counts a view whenever someone watches at least two uninterrupted minutes of a show or movie.

“Cobra Kai” takes place over 30 years after the events of the 1984 All Valley Karate Tournament with the continuation of the inescapable conflict between Daniel LaRusso (Ralph Macchio) and Johnny Lawrence (William Zabka).

Season 3 finds everyone reeling in the aftermath of the violent high school brawl between their dojos, which left Miguel (Xolo Maridueña) in a precarious condition. While Daniel searches for answers in his past and Johnny seeks redemption, Kreese (Martin Kove) further manipulates his vulnerable students with his own vision of dominance.

The soul of the Valley is at stake, and the fate of every student and sensei hangs in the balance, Netflix’s not-at-all melodramatic logline concludes. (Hey, we’re not poking too much fun — it’s a great series.)

Will Smith (not that Will Smith), James Lassiter and Caleeb Pinkett executive produce for Overbrook Entertainment, along with Susan Ekins in association with Sony Pictures Television. Macchio and Zabka serve as co-executive producers.

01/12/2021 TV & Movies Comments Off on 'Cobra Kai' Season 3 Draws Big Viewership, but Nowhere Near 'Bridgerton' or 'Queen's Gambit'
Recent Posts
We and our partners use cookies on this site to improve our service, perform analytics, personalize advertising, measure advertising performance, and remember website preferences.Ok