Emotions were running high for Charlotte Hawkins on today’s Good Morning Britain as she bid farewell to the director of the show ahead of his move to Piers Morgan’s rival programme.

Earlier this year, it was announced that GMB director Erron Gordon would be taking on a new role as Executive Creative Director at News UK Broadcasting, joining Piers’ new series.

‘Having directed Piers for countless hours of live breaking news and event television, I’m thrilled to be in his ear again calling the shots,’ he said at the time, while Piers, who quit GMB in March, added: ‘I’m absolutely delighted he will be joining us on this exciting new challenge.’

On Tuesday’s edition of GMB, Charlotte expressed her sadness over Erron leaving this week when turning to Laura Tobin for the weather.

‘Let’s find out what’s happening with the weather. Good morning to you Laura. Now I have to say, I have a tear in my eye this morning. It’s a sad one, because it’s my last show with our fabulous director Erron, who as you know is leaving this week,’ the broadcaster said.

‘So emotional here, but are you going to be able to cheer us up with the weather this morning?’ 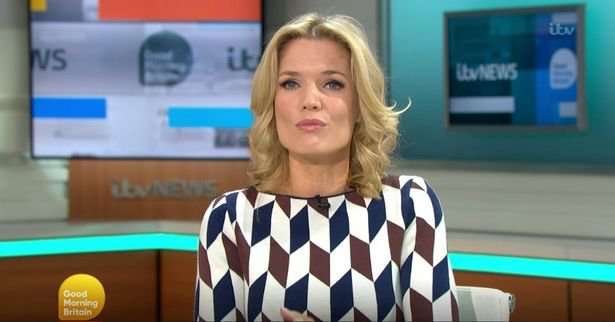 On Twitter, Erron wrote that he ‘didn’t blame’ Charlotte for becoming emotional over his departure.

‘Think I must have something in my eye this morning…. my last with the brilliant @errongordon after 7 years working together!’ she responded, adding a crying emoji.

Several Twitter users wished Erron luck on his new venture, with one writing: ‘Good luck @errongordon on your new adventure. You’ve made an amazing contribution to @ITV over the years.’

‘Have a great one! Amazing legacy and you’ll leave huge shoes to fill,’ someone else said.

The announcement of Piers’ new global primetime show on talkTV came after speculation that he would join GB News, which has struggled to keep up with its competitors since its launch in June.

The show is due to launch in early 2022, airing on weeknights in the UK, US and Australia, with Piers also presenting a series of True Crime documentaries.

‘I’m thrilled to be returning to News Corp. which is where I began my media career more than 30 years ago. Rupert Murdoch has been a constant and fearless champion of free speech and we are going to be building something new and very exciting together,’ he said in a statement about the news.

‘I want my global show to be a fearless forum for lively debate and agenda-setting interviews, and a place that celebrates the right of everyone to have an opinion, and for those opinions to be vigorously examined and challenged.’

Erron said he was ‘truly excited about what News UK wants to achieve with the station’, saying it was ‘impossible to resist’ reuniting with Piers.

‘There are very few occasions in your career when you get to create something entirely new. TalkTV is one of those opportunities,’ he stated.

Good Morning Britain airs weekdays from 6am on ITV.