Some good news, Carnival Row fans: We finally know when new episodes will arrive. The bad news? It’s not returning for Season 3 at Prime Video.

TVLine has learned that the fantasy series starring Orlando Bloom and Cara Delevingne will end with Season 2, which is set to premiere on Friday, Feb. 17, 2023; new installments of the 10-episode final season will stream weekly. (Season 1 was previously released on Aug. 30, 2019.)

The streamer also unveiled the first trailer for the show’s farewell run, which you can check out above, as well as a new poster (see below).

Meanwhile, Tourmaline (Karla Crome) “inherits supernatural powers that threaten her fate and the future of The Row.” Plus, after escaping The Burgue and her vengeful brother Ezra (Andrew Gower), Imogen Spurnrose (Tamzin Merchant) and her partner Agreus Astrayon (David Gyasi) “encounter a radical new society which upends their plans. With humans and fae folk divided and freedom on the line, each hero will face impossible dilemmas and soul-defining tests” in the conclusion of Carnival Row.

Bummed that Carnival Row is coming to an end? Tell us in the comments. 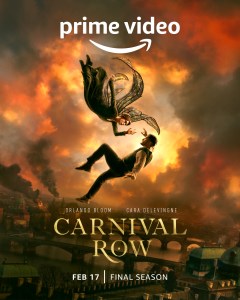