Bethenny Frankel from The Real Housewives of New York is speaking out about another reality television couple.

Bethenny, who has been in the reality spotlight for years, knows what it is like to put your personal relationships on television and get judged for them.

And she’s not judging. She’s encouraging these two from The Bachelorette to make it official.

Hannah sent Tyler home as he was about to propose during the finale because she wanted to give the relationship with Jed Wyatt a shot.

He ended up admitting that he had another relationship at home, essentially ending any chance of them staying together.

Despite Hannah and Tyler’s attempt to rekindle their romance just days after The Bachelorette: After The Final Rose special aired last spring, nothing has happened.

But fans like Bethenny haven’t given up yet. On Instagram, she shared a photo of a windmill on her stories. And she boldly tagged both Hannah and Tyler, hinting she wants them to spend time together in a windmill. 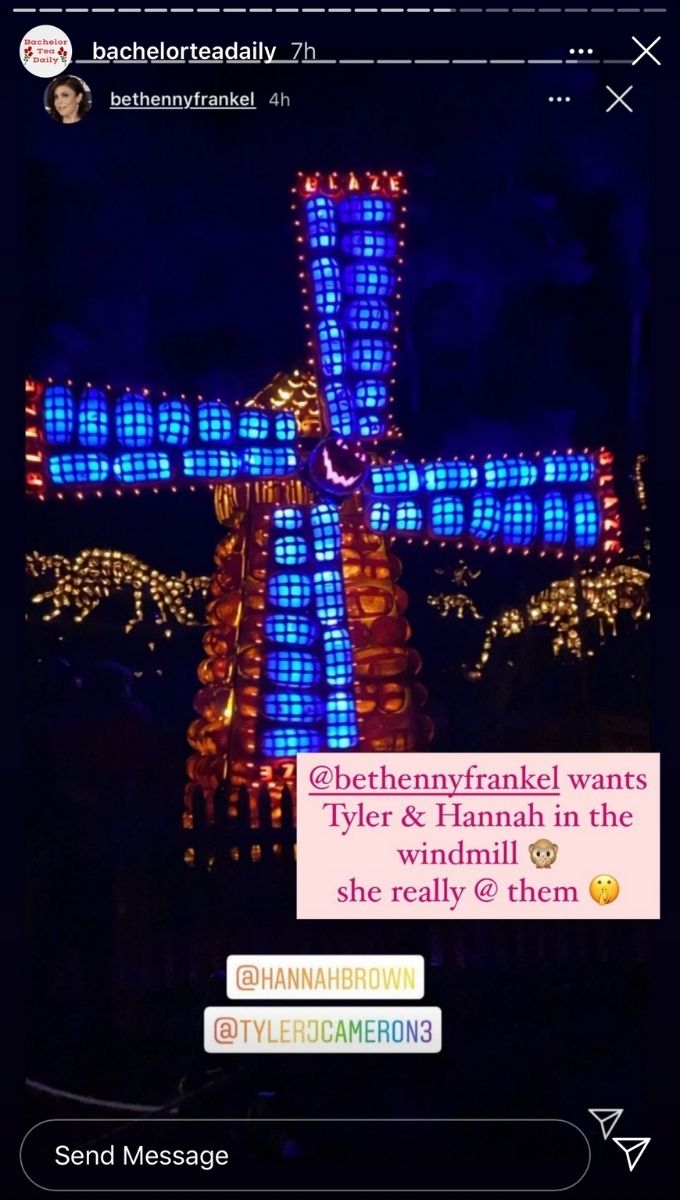 The fan page @bachelorteadaily was surprised to see Bethenny be so bold, essentially telling them that they need to go have sex.

Bethenny’s reference to the windmill goes back to Peter Weber and Hannah B, who had sex four times during their overnight date, which happened to be in a windmill.

Bethenny Frankel could be following The Bachelorette on TV

Even though Bethenny is known for The Real Housewives of New York, it’s clear that she watches The Bachelorette on Monday nights. She knows that these two are not together, but she’s cheering them on like the rest of Bachelor Nation.

It wasn’t long ago that Hannah and Tyler dished details about their relationship. Tyler and Hannah did share a sweet moment on YouTube, as they addressed their time in quarantine together.

While fans thought that they had hooked up, they admitted that they had slept in the same bed for weeks and didn’t share as much as a kiss.

Tyler admitted he was heartbroken as he had just lost his mother and he wasn’t in the right mindset. Right now, they are working on being friends.

After Tyler and Hannah were spotted together, a source came forward, saying that they were not exploring a romantic connection.

The Bachelorette airs Tuesdays at 8/7c on ABC.

10/16/2020 TV & Movies Comments Off on Bethenny Frankel wants Bachelorette stars Hannah Brown and Tyler Cameron together in a windmill
Recent Posts
We and our partners use cookies on this site to improve our service, perform analytics, personalize advertising, measure advertising performance, and remember website preferences.Ok