Beat The Chasers: Jenny punches Paul for getting question wrong

Beat the Chasers fans were disappointed when contestant Gordon missed out on the opportunity to take home a jackpot prize of £10,000 as he faced the quiz stars. The player went up against Paul Sinha, Jenny Ryan and Shaun Wallace but ran out of time in the quick fire round meaning he went home empty-handed. But fans have blamed Paul for Gordon’s loss claiming he didn’t press his buzzer so he answered during the player’s alloted time.

“Persuasion,” Paul announced with Bradley turning back to Gordon for his next question.

Watching the footage back, viewers can see Paul’s buzzer did not call out his name, which it usually does.

As a result many believed the chaser had not pressed his button and instead answered during Gordon’s time. 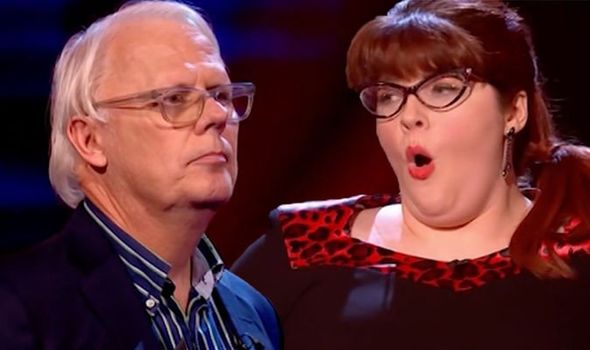 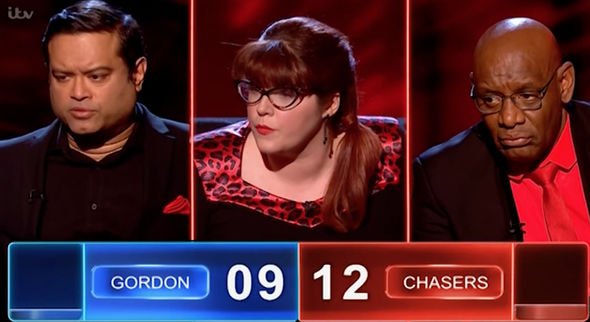 “Paul Never hit the buzzer for one of his answers #BeatTheChasers #fix,” one viewer commented on Twitter.

Another added: “Omg don’t know what to make about #BeatTheChasers Paul’s buzzer 100% didn’t go off?! @ITV.”

“I’ve just rewound and watched again – PAUL DEFFO DID NOT PRESS HIS BUZZER, the announcer never said his name – but she did in all the other chaser presses – foul play, chasers should be disqualified,” a third insisted.

Someone else continued: “Didn’t hear Paul’s buzzer on one of those questions there. Mistake, or editing error?” 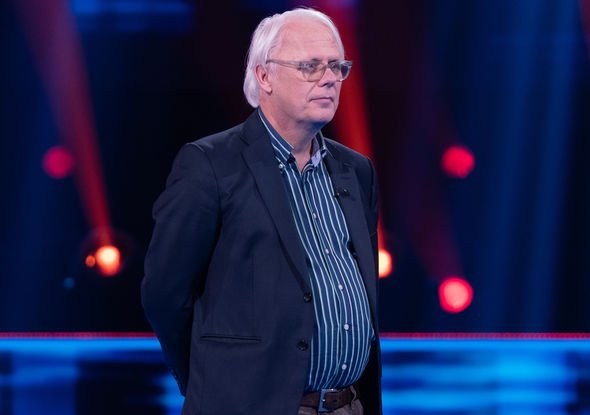 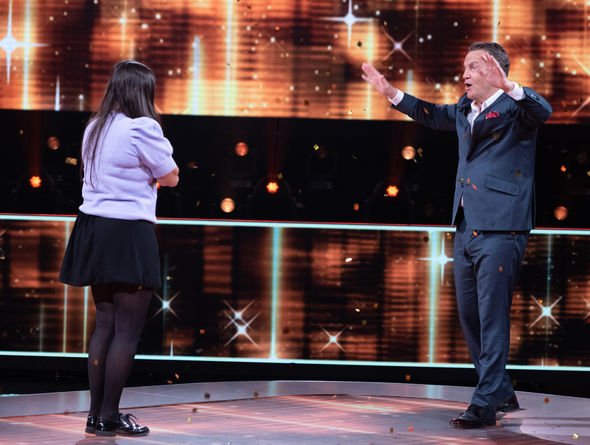 Earlier this week, fans branded the show a “fix” after contestant Kat walked away with £50,000 after taking on all five chasers.

Kat, an accountant from Essex, was hoping to win big to help pay for her upcoming nuptials and she admitted she “hadn’t prepared” for her appearance.

While it appeared her relaxed approach worked in her favour, some viewers felt she was given “easy questions”.

“#beatthechasers Are you kidding me? Complete duffer wins £50k. Biggest rigged show ever. Bradley ‘You are brilliant’. Get a grip,” one viewer raged.

Another added: “This show would be more entertaining if it wasn’t so rigged. #BeatTheChasers.”

“As if that last one with Kat wasn’t rigged with those easy questions at the start so she Wins 50k,” a third tweeted.

Jenny could be seen teasing the quizzer as she jokingly hit him on the arm after a mix-up with questions.

Posting on Twitter, Paul explained: “THREAD Since I’ve given up on anyone’s narrative being ‘The Parky guy is answering a lot of questions’, I shall address that punch.

“I know Sweet FA about Star Wars. It just wasn’t my question to answer. I just heard a hard T sound twice and assumed the answer must be Tatooine.

“Because we make mistakes. Jenny was right to be angry. Neither of us were tight to stare at each other. Both of us had totally forgotten that the next question was ours.

“In that four seconds, both of us looked ridiculous. It was exhilarating at the time, and p**s funny as well. It is funny when things go wrong. I didn’t make the same mistake again, Jenny never punched anyone again.

“After nine months of lockdown, loss of work, rules, regulations, frustration – it felt amazing to get punched by a great friend in a totally farcical incident. I just hadn’t had enough of that in 2020.”

Beat the Chasers airs weeknights on ITV at 9pm.

01/07/2021 TV & Movies Comments Off on Beat the Chasers fans demand quizzers ‘disqualified’ as players loses £10K over ‘mistake’
Recent Posts
We and our partners use cookies on this site to improve our service, perform analytics, personalize advertising, measure advertising performance, and remember website preferences.Ok