With cities and towns all over the country enter the higher tiers of the Government’s coronavirus warning system, local lockdowns are being implemented. In particular, the North-East has found itself entering the top tier, tier three, and thus Boris Johnson has unveiled plans to have Liverpool on total lockdown while Greater Manchester could follow suit in the near-future. The prospect of Manchester going into lockdown is one that’s been vehemently opposed by mayor Andy Burnham and it was a heated topic for debate between Charlie and Mr Raab on today’s BBC Breakfast.

Throughout the chat, Mr Raab had mentioned how Mr Burnham’s resistance to getting on side with the Government’s plans for the North-East was making the process more difficult.

But when Stayt asked him about the prospect of a national lockdown too, Mr Raab decided to refer to Mr Burnham’s reluctance once again.

However, this consistent theme in his answers was picked up on by Stayt who pulled the Foreign Secretary up on it – sparking a heated clash.

Stayt asked Mr Raab: “Is a national lockdown something that the Government is still actively considering?” 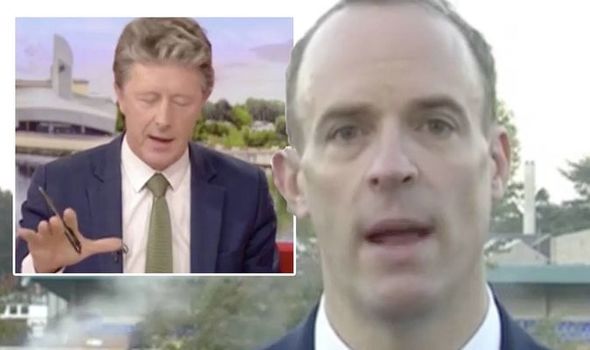 “Put them in place with local authorities and with local leaders to avoid a national level lockdown.”

But Stayt promptly interjected and began to cut Mr Raab off as he grew tired with Mr Burnham’s name being repeated in the majority of his answers.

“I don’t want to go back to that point,” Stayt interrupted. “Because it’s a point you’ve made three times now.

“I don’t want you to make that point again because you’ve made that already.”

Mr Raab wasn’t to be deterred, however, as he hit back it “was an important one” before the pair spoke over one another, with the MP continuing: “Sorry, with the greatest respect,

“I’ll answer the questions in the way that I deem apporpriate, you can ask any question you like.”

10/16/2020 TV & Movies Comments Off on BBC Breakfast row erupts as Raab hits back at Stayt over Burnham lockdown opposition
Recent Posts
We and our partners use cookies on this site to improve our service, perform analytics, personalize advertising, measure advertising performance, and remember website preferences.Ok