Film is a fitting way to honor one of humanity’s greatest scientific achievements, putting a man on the moon.

As the 50th anniversary of the Apollo 11 lunar landing approaches on July 20, it’s the stunning visuals of the epic 1969 journey, including Neil Armstrong’s historic first steps, which remain burned in the global psyche.

After all, astronauts Armstrong, Buzz Aldrin and Michael Collins were made honorary members of the American Society of Cinematographers for their exceptional camerawork.

Here are five ways to honor the day in film:

Earthrise and the lunar module as seen in "Apollo 11: The First Steps." (Photo: STATEMENT PICTURES FOR CNN FILMS/MacGILLIVRAY FREEMAN FILMS)

Director Todd Douglas Miller comes the closest to bringing us back to the unforgettable mission – from the final moments of preparation, liftoff, landing and the triumphant return to Earth – in the documentary “Apollo 11.” Using a newly discovered trove of never-before-seen 70 mm footage and audio recordings, the film deserves to be seen big with great sound to fully re-create the experience. Miller has specially cut the film for IMAX screens across the country with the “First Steps Edition,” the go-to source for movie appreciation.

The original, critically lauded “Apollo 11” documentary is available onBlu-ray, a special 4K edition for the anniversary, airs July 20 on CNN and is streaming on Amazon, Google Play, Vudu and YouTube. 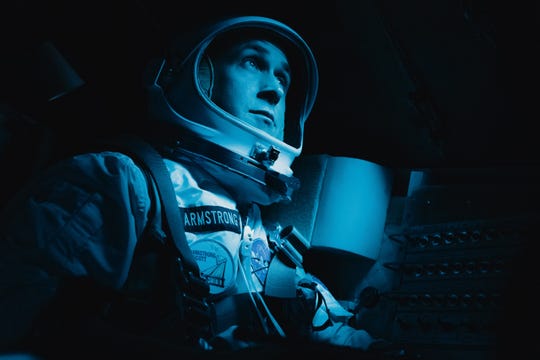 Chazelle stunningly re-creates the hair-raising landing and walk on the lunar landscape, using a desolate rock quarry to shoot the scenes.

Aldrin, now 89, was on hand to kick off “Apollo 11: The Immersive Live Show,” which brings the moon landing to life in an immersive multimedia show currently housed at the specially built Lunar Dome in Pasadena, California. Dramatic moments, even the rocket launch, are displayed cosmically huge on 40,000 square feet of screen with 360-degree video projection and a score recorded with a 70-piece orchestra. A cast of 20 live actors humanize the story, telling one man’s role in making the landing possible.

For those not able to make it to Pasadena, the whole show has plans to travel to another 17 cities nationwide, with next stops in Costa Mesa, California (Oct. 10 to Nov. 24), and Houston.

“Apollo 13” follows events that took place two missions after Apollo 11, but the risks of space travel come to light with the harrowing flight, dramatized by director Ron Howard. Tom Hanks (Jim Lovell), Kevin Bacon (Jack Swigert) and Bill Paxton (Fred Haise) star as the astronauts in peril, dealing with a dangerous re-entry after an onboard explosion.

The scene where aeronautical engineers scramble for solutions on the ground working with only the sparse equipment the astronauts have at their disposal gives a sobering indication of just how threadbare these missions were. As flight director Gene Kranz, Ed Harris still gives chills with stoic lines like “With all due respect, sir, I believe this will be our finest hour.”

Now showing on Starz and streaming on Google Play, YouTube, Amazon and iTunes. 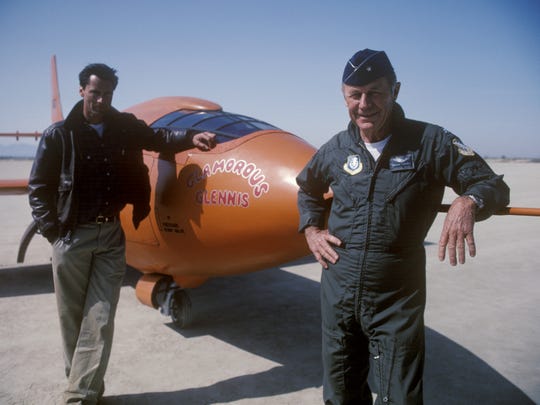 Sam Shepard (left), who played Chuck Yeager (right) in "The Right Stuff," poses with the famed test pilot in front of a replica of the rocket-powered Glamorous Glennis used in the movie. (Photo: WARNER BROTHERS VIA GETTY IMAGES)

Philip Kaufman’s epic “The Right Stuff,” which won four Oscars and is based on Tom Wolfe’s book, showed the mettle of the space race pioneers – starting with daring test pilots such as Sam Shepard’s Chuck Yeager spearheading the space program’s early days. Harris, in another memorable space performance, stars as Mercury astronaut John Glenn, who becomes the first American to orbit the Earth before enduring an apparent heat shield malfunction upon re-entry.