It’s not just Britons who go mad for a high valued item, on the American version of Antiques Roadshow, Kevin Zavian was tasked with taking a closer look at two pieces of jewellery. While the owner initially thought the bracelet – which was laden with 18 carats of diamonds – was the highest value, she was surprised to learn the pearl and diamond ring was in fact double the price after Kevin revealed the jeweller who made it was Van Cleef & Arpels.

The guest told the expert how she came to own such exquisite pieces of jewellery.

She said: “When I was working in Japan in the late 80s, [my husband who was a Rabbi] was asked to officiate a funeral of someone who wasn’t a member of the congregation, and met this woman and she was charmed by him.

“He officiated at her husband’s funeral and she invited him to dinner and he said ‘my fiancé is coming back from Japan, would you mind if it was the three of us?’

“When she passed, she left these two items to me in her will and I remember admiring the ring, because it’s something she would always wear.” 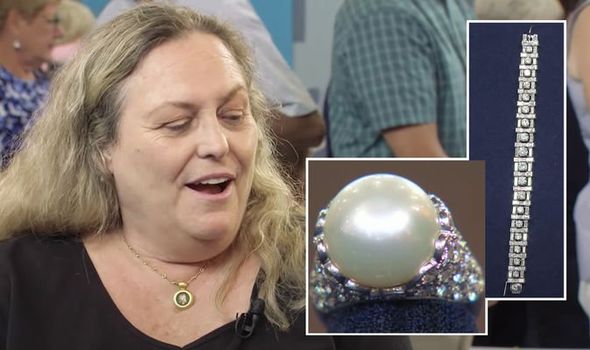 “Have you ever had an appraisal done on the ring?” Kevin asked.

Kevin focussed on the bracelet first and revealed it was a “classic” from the “1940s”.

“We can tell it has some European cut diamonds in it. If you look through the bracelet, the larger rounder stones all add up to 8 carats total weight.

“Then we have these baguettes – straight baguettes – kind of basket weaved throughout it and in those theres another 10 carats of diamonds. 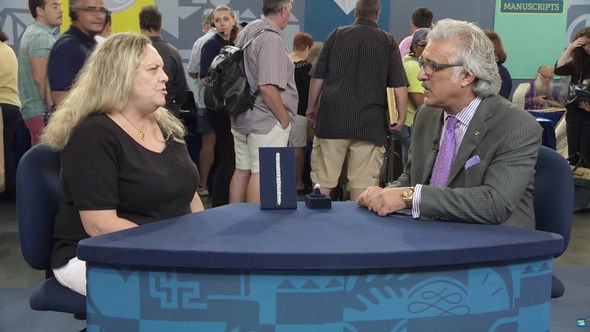 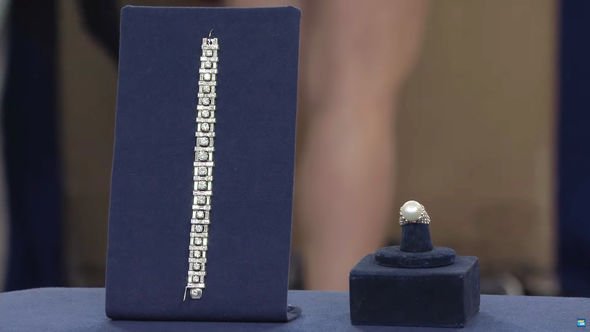 “It’s a Jewish appraisal, 18 carats – it’s good luck! And then it’s made out of platinum, classic. It’s built like a truck, that bracelet will never wear out and it’s fantastic,” he continued.

But there was a catch which would impact the price tag.

“But when I see this kind of bracelet and the metal work is a little heavy, it leads me to think something like this was made in the US, probably New York. 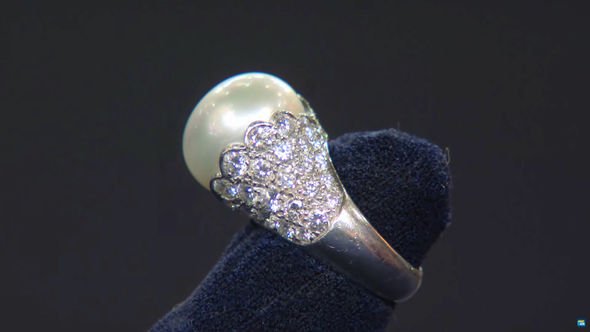 Shocked, the lady replied: “Wow! That’s quite a gift!”

“Well, I’m not here for the bracelet, I’m here for the ring!” Kevin said before going into the design detail.

“First I love the pearl – it’s about 14 millimetres. It’s a little bit of a button pearl, instead of being very road it’s sloped down a little bit. We’re assuming this is cultured.

“If we turn it to the side, it’s beautiful set, in what we call pave set diamonds.

“It’s made of out platinum, and the ring is probably mid-20th century, maybe early 60s.

“Maybe six carats of diamonds. Now when we turn the ring around and pull it off, over here is where the magic starts to happen. We can see it’s signed, VCA,” he remarked.

Realising what the initials stood for, the guest exclaimed: “Van Cleef & Arpels!

“Holy moly. She said something about Van Cleef & Arpels, I always thought it was the bracelet!”

“I know you did,” Kevin replied.

“And it’s the kind of thing I think would get to the high end of the estimate – and very quick because Van Cleef is sought after.”

But what would it cost to replace?

“If I was doing this for insurance replacement value, I believe you would have to put the bracelet at $35,000.

“But the ring, because it’s Van Cleef, for insurance replacement, it would probably be close to the $60,000,” he confirmed.

BBC One is airing a repeat of Antiques Roadshow, tonight at 8pm.