A Place in the Sun: Couple disagree on property

Jasmine Harman, 45, was on hand to help husband and wife duo John and Soussan find a holiday home in the Spanish region of Costa Calida. The couple explained to the A Place in the Sun presenter they wanted a property that had two bedrooms, an outside area and one that was on the market for £75,000 or lower. However, when she showed them property number four on the Channel 4 programme, she couldn’t help but feel guilty when they had a disagreement.

The search started off with some promise as property number one was a top-floor penthouse, which came with a communal pool and boasted a modern interior.

On the market for £75,500, it was at the top of the couple’s budget and it seems they were divided over whether they would give it a chance.

Whereas Soussan thought the apartment was a little small, her husband was quite pleased by the fact they wouldn’t have to do anything in terms of renovation.

By the end of the viewing, the guests were still unsure and told Jasmine they would ideally like somewhere a little bigger.

Property number two was a bit more appealing, with a pool and panoramic views of the Spanish countryside intriguing the pair, who told the presenter their first impressions were better than the first. 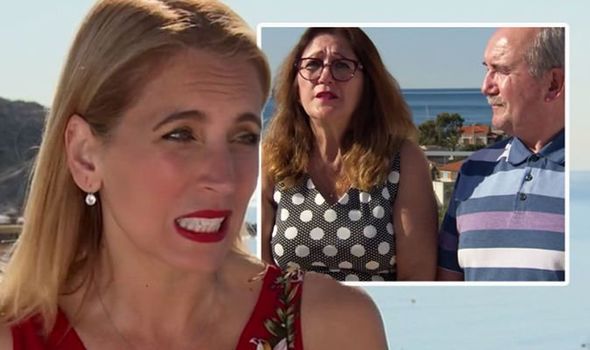 It comprised of two bedrooms and was on the market for £76,500 but Jasmine explained the agents would be willing to accept £73,000.

Once they stepped inside the house, Soussan said she felt “a lot better” about it as it offered a bigger space.

Concluding the viewing, the guests told the presenter they were “pleasantly surprised” by the establishment and it was going to be hard to beat.

Jasmine then took the pair to see property number three, which had only been on the market for a week and valued at £77,500.

What have I done?

Stepping inside, the couple liked the modern interior of the home and they liked the fact there were two bathrooms, which would help when they have visitors.

By the end of the viewing, this became a property of serious consideration for John and Soussan but the presenter still had two more places to show them.

Next up, she took them somewhere which was close to a golf course, knowing that John had a soft spot for the sport.

Taking them to another modern property, the couple said Jasmine had definitely thrown them a “curveball” but Soussan wasn’t completely sold.

She said it might have been “a bit too modern” but both hers and John’s interest was piqued when they heard they would have access to the 24 swimming pools situated on the compound.

On the market for £73,000, property number four was well within budget and included three-bedrooms, giving them plenty of space for visitors.

When the presenter asked for their thoughts at the end of the viewing, the husband and wife duo were on very different ends of the spectrum.

Whereas John was all for making the house a contender, Soussan just couldn’t get her head around living there.

The latter said she had a “better feeling” for property number three and wouldn’t be keen on putting an offer in.

Noticing the pair were at loggerheads, Jasmine jumped in as she remarked: “What have I done?”

With one more card up her sleeve, the presenter then took the husband and wife to see the fifth and final property.

02/16/2021 TV & Movies Comments Off on A Place in the Sun’s Jasmine Harman despairs over disagreement ‘What have I done?’
Recent Posts