IDK how far you’ve gotten in your Selling Sunset binge watch, but if you’re here, chances are you just watched Emma’s awkward conversation with Christine Quinn about their alleged mutual ex and are asking…WTF is even going on?

Just so we’re all on the same page, Christine was extremely upset to find out about Emma joining the Oppenheim Group due to the fact that her ex was allegedly cheating with Emma. Oh, and they were engaged “two months after we broke up.” Christine even confronted Emma about their overlap, claiming she was engaged to this mystery man (whose name is never mentioned) and implying he might have even given Emma her rejected ring.

The thing is, Christine’s close friends—including Mary, who lived with her at the time—have no recollection of Christine e-v-e-r being engaged, and basically thinks she was gaslighting everyone. (Also, Davina has no recollection of this happening, even though Christine claims she told her.)

So…what is the truth? We did a pretty extra deep dive into everyone’s socials so you don’t have to and found out some intel.

How, you ask? Due to a casual deep dive into her tagged pics. Photos posted on her friend’s accounts show Emma with a ring on in 2015. We won’t be sharing the photo here due to keeping everyone’s privacy intact—but trust! A ring was on her finger in 2015! But here’s where things get complicated…

We Also Know Emma Was Engaged in 2017

We know this because of yet another tagged pic of her celebrating said engagement with a friend, which was taken in December 2017. TBD if she was re-engaged to the same person (is that a thing? IDK) or got engaged to someone new, but either way it seems safe to assume *this* engagement is with the same man Christine dated, due to a very clear Oppenheim Group connection.

And Yep: We Know Who Emma Was Engaged To

Some Sleuthing 101 makes it pretty clear that he works with the O Group, but he’s not a cast member and he clearly doesn’t want his identity known, so we won’t be mentioning him here. Moving on!

Due to the fact that she’s been famous for a minute, Christine’s Instagram is pretty scrubbed. Like, her tagged posts only go back to 2018. But! We all know Mary and Christine were friends back in the day, and if you check out Mary’s tagged pics from 2017, Christine isn’t wearing an engagement ring in any of them. 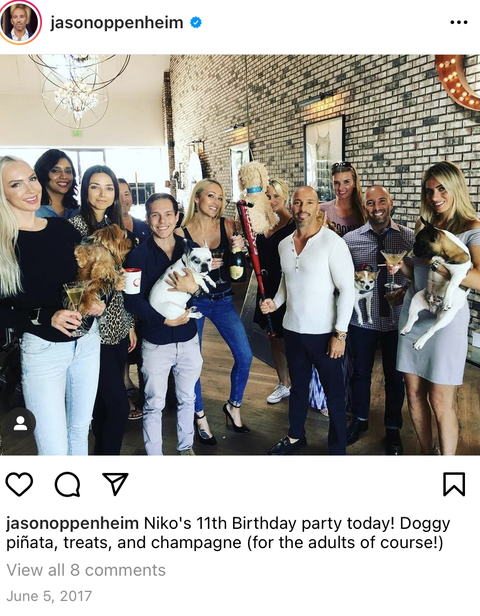 So no: Christine wasn’t visibly engaged to the same person as Emma as far as we can tell. But that doesn’t mean they didn’t have something private going on BTS like Christine claims!