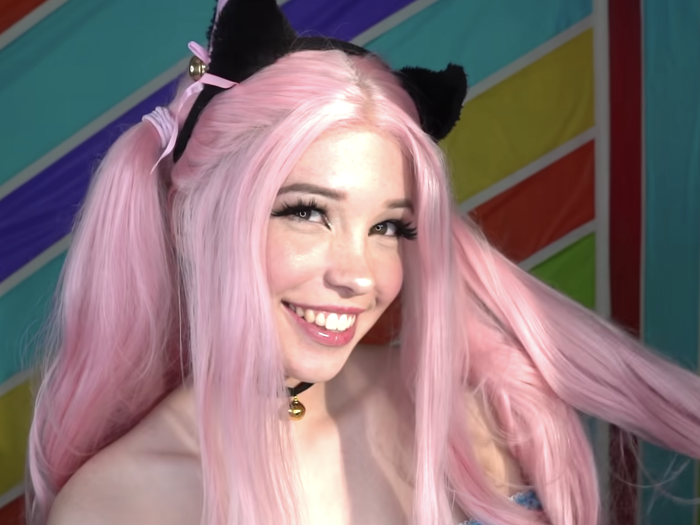 On Monday, YouTube appeared to abruptly ban controversial influencer Belle Delphine's channel. The e-girl influencer, who is most famous for selling her bathwater, tweeted later that evening that her account had been reinstated, but the sudden ban and alleged double standards at play had many online buzzing.

Belle Delphine's YouTube channel, which is currently accessible, is listed as having approximately 1.8 million followers. Known for her cosplay and not-safe-for-work (NSFW) content, the influencer, now 21 according to internet personality index site Famous Birthdays, rose to fame in 2019 after she sold "GamerGirl Bathwater" for $30 a bottle.

She returned to social media in June 2020 with a video titled "I'M BACK -belle delphine," a parody of Tekashi 6ix9ine's "Gooba" that served to announce her return as well as the launch of her OnlyFans (the Instagram and TikTok handles Delphine promotes in the video are now inaccessible).

On Monday, her YouTube account briefly appeared to have been banned, with Vice reporting that Delphine's channel had been replaced by a red banner that said, "This account has been terminated due to multiple or severe violations of YouTube's policy on nudity or sexual content."

Delphine told Vice that on Saturday, YouTube notified her that it had removed one of her September videos (a music video for Doll.ia's "Plushie Gun") for being in violation of its sexual content guidelines.  The email also reportedly contained a warning that if Delphine continued to post content that violated YouTube's guidelines, she would receive a strike on her channel. Three strikes on a YouTube channel result in a permanent ban. Reactions to the removed video, which effectively repost Delphine's video in full, remain on the platform.

The apparent ban sparked outrage and confusion on Monday, leading to the term "Belle Delphine" trending on Twitter. Delphine quote retweeted a tweet from social media commentator Keemstar that included a video showing clips from her "I'M BACK" video juxtaposed against clips from YouTube videos including the "Gooba" and "WAP" music videos.

The TeamYouTube account responded to that tweet, asking Delphine to share her channel URL so that it could "take a look." As of Monday evening, her channel had been reinstated and is now currently available.

The Verge's Julia Alexander reported on Twitter that per YouTube, the platform had removed three videos for violating its sex & nudity policies, resulting in account termination, but that one of the videos should have been age-restricted rather than removed.

In a reply to Delphine on Twitter, the TeamYouTube account said that the termination of Delphine's account was "a mistake by the review team" and that it was "so sorry for the frustration this caused."

YouTube did not immediately respond to Insider's request for further comment, but as of now, Delphine's channel remains active.

11/24/2020 Music Comments Off on YouTube suddenly banned, and then quickly reinstated, e-girl influencer Belle Delphine’s channel
Recent Posts
We and our partners use cookies on this site to improve our service, perform analytics, personalize advertising, measure advertising performance, and remember website preferences.Ok