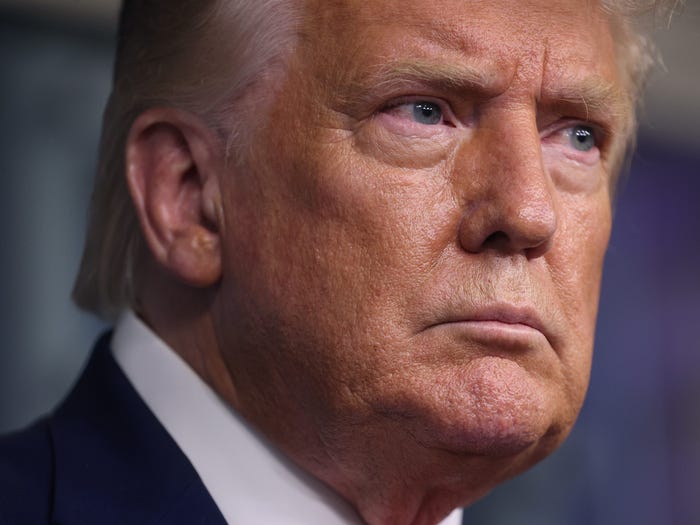 President Donald Trump tweeted an interview with the former administrator of 8chan and 8kun, the fringe message boards that have hosted the QAnon conspiracy theory's leader, Q. In the segment, Ron Watkins was used as an expert, but spread a baseless conspiracy theory about voter fraud.

The video was a segment from One America News Network (OAN), a right-wing, pro-Trump news network, with host Chanel Rion interviewing Watkins.

The segment advanced a voter fraud conspiracy theory alleging that Dominion Voting Systems, an election-software company that battleground states including Michigan and Georgia used in the election, allowed votes for Trump to be switched to votes for President-elect Joe Biden. Twitter affixed a label to the tweet saying, "This claim about election fraud is disputed."

The claim is baseless, and Trump has previously tweeted when OAN ran a segment about the conspiracy theory last week.

In a statement on Tuesday, Dominion denied all conspiracy theories about its software, including the notion that a secret supercomputer was used to change ballots. The Cybersecurity and Infrastructure Security Agency (CISA) also denied claims of widespread voter fraud, which Trump and his attorney Rudy Giuliani continue to allege.

"The November 3rd election was the most secure in American history. Right now, across the country, election officials are reviewing and double checking the entire election process prior to finalizing the result," the CISA said in a November 12 statement.

In the interview Trump shared just after midnight on Thursday, OAN referenced Watkins as a "cyber analyst" and did not reveal his ties to 8kun, the message board that his father, Jim Watkins, still operates. The younger Watkins claimed in the OAN interview that Dominion Voting Systems' software was vulnerable to election fraud, a widely disputed and unsubstantiated claim.

OAN has previously cited an "unaudited analysis of data" from an election watchdog called Edison Research to back up its claims about Dominion, but Edison Research's president, Larry Rosin, told the BBC that the company "has produced no such report and we have no evidence of any voter fraud."

Conspiracy theories about Dominion have been largely popularized by believers of the far-right QAnon conspiracy theory movement, which baselessly claims Trump is fighting a "deep state" cabal of human traffickers. 1 in 7 tweets using the hashtag "#Dominion" from November 5 to November 13 were from accounts that identified themselves as QAnon supporters, according to an analysis from the misinformation nonprofit Advance Democracy that was conducted for NBC News.

Q, the anonymous and secretive figure whose "Q drops" on 8kun propel the conspiracy-theory movement, was silent in the days after the election, leading QAnon believers to craft their own narratives. After the Dominion claims were spread throughout the QAnon community, Watkins tweeted about the conspiracy theory, later tweeting that Rion had inquired about the claims.

Watkins is seemingly trying to bring the theory to right-wing politicians. On Wednesday, Watkins tagged Ohio Rep. Jim Jordan in a tweet, asking the congressman if he could "explain a huge flaw in the Dominion software." In a subsequent tweet, Watkins said that he was in contact with Jordan and planned on briefing his staff. Previously, Watkins mentioned Giuliani in a tweet about the theory.

Watkins resigned from his post as an administrator of his father's website on Election Day, telling Insider in a Twitter message that he had left 8kun to pursue his passion for woodworking. He also said that he "never had anything to do with Q."

Some extremism researchers have speculated that the elder Watkins may be Q himself, or at least be in some way connected to the shadowy figure or group.

When asked on Thursday whether he was pivoting his work to focus on election security, Watkins said he was still working on woodworking, telling Insider that he "cut 16 mortises into 4 beams today."

11/19/2020 Music Comments Off on Trump shared a video that featured a former administrator of QAnon’s fringe message board spreading election misinformation
Recent Posts
We and our partners use cookies on this site to improve our service, perform analytics, personalize advertising, measure advertising performance, and remember website preferences.Ok