The last time the band from Oxford, England, was in Australia it was June 2016 – and the UK was casting its vote on Brexit. As the band boarded a flight from Melbourne to Newcastle, the votes – including Swervedriver's duly cast postals – were being tallied back home.

"We arrived in Newcastle and we're all trying frantically to get internet on our phones and there it was, the vote had gone through," recalls Franklin. "And we were furious. That night in Newcastle we played an aggressive set."

Now, as I speak to Franklin on the eve of their next Australian tour, Boris Johnston is just hours away from becoming the UK's next PM. And Franklin is again furious.

"The whole thing is just ludicrous," says the singer-guitarist on the phone from his home in Oxford. "People still talk about 'the will of the people', but if you added up the people in the country who voted for it now, a lot of the older people would have passed away, a lot of the kids were too young to vote for it and would never vote for it."

It's fitting, given the current mood in the UK (and elsewhere), that the title of Swervedriver's first album in almost four years is Future Ruins. Still, it's debatable whether any other guitar band can make dystopia sound as lush and arresting as Swervedriver, formed in 1989 and hailed, somewhat clumsily, as one of the founders of shoegaze along with their then-Creation Records labelmates My Bloody Valentine and Ride. 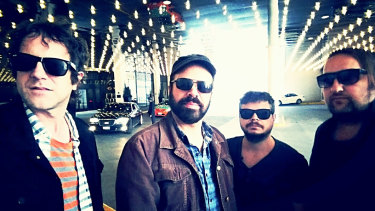 Shoegazing was probably the last thing Swervedriver inspired, given Franklin's fondness for visceral American alternative guitar bands such as Husker Du, Dinosaur Jr and Sonic Youth. In fact, Swervedriver announced their arrival in 1990 with a veritable guitar maelstrom, the EP single Son of Mustang Ford.

They quickly followed up in 1991 with their debut album, Raise, which remains a fan favourite along with their second album, 1993's Mezcal Head.  The band released two more albums – 1995's Ejector Seat Reservation and 1998's 99th Dream, but the latter became their swansong, with the band breaking up amid record label woes.

Post-breakup, Franklin kept busy with solo projects such as Bolts of Melody, Toshack Highway and Magnetic Morning. A Swervedriver reunion eventually happened, at Coachella in 2008, but it took a 2013 tour of playing the Raise album in full to inspire the band to formally reunite.

That resulted in their first album in 17 years, 2015's I Wasn’t Born to Lose You, on which it frankly sounded like the band had never been away. Likewise this year's Future Ruins.

In each case, says Franklin, it's been a case of "going back to the source" to recapture the essential Swervedriver sound.

"That was the crucial thing, 'let's go back to what we did first off and then update it'," he says. "A lot of the updating wasn't too thought-about either, it was more just going with the flow."

This has been made easier by the fact that, in each instance, Swervedriver have been immersed in playing their early albums.

When the band began recording I Wasn’t Born to Lose You, they were still doing their Raise tour. They laid down new tracks in two sessions, with the first five tracked in one day in Melbourne – the day after the band's Northcote Social Club show – and the final five in London, again the day after a show.

They applied the same method to recording Future Ruins, but in this instance after a double-album show, playing Raise and Mezcal Head back-to-back. This time they had two weeks in a Los Angeles studio to lay tracks – so they churned out 30.

"We just recorded everything we had, we just thought, 'Let's have a bash at everything and see what happens'," says Franklin. The result is another powerful, coherent set of 10 songs that are unmistakeably Swervedriver, but showing a maturing and expanding palette.

After 30 years, Franklin and fellow guitarist Jimmy Hartridge remain the only original members, joined in recent years by drummer Mikey Jones and, most recently, former Supergrass bassist Mick Quinn. At the time we talk, though, Franklin's not sure who will be playing bass on the Australian tour; it turns out another player has been tag-teaming with Quinn: Swervedriver fan and Iggy Pop bassist Ben Ellis.

"He said Mezcal Head was his favourite album, so he was thrilled to be playing with Swervedriver, but we're also quite thrilled to share a bass player with Iggy, you know," says Franklin.

Swervedriver play the Croxton Bandroom, Melbourne on Thursday September 19, the Manning Bar, Sydney on the 20th, The Zoo, Brisbane on the 21st, and the Rosemount Hotel, Perth on Sunday the 22nd.
Future Ruins is out now through Dangerbird/Poison City Records. Details: swervedriver.com

Related posts:
09/10/2019 Music Comments Off on Swervedriver’s Australian tours are great for fans but lousy for Britain
Recent Posts
We and our partners use cookies on this site to improve our service, perform analytics, personalize advertising, measure advertising performance, and remember website preferences.Ok