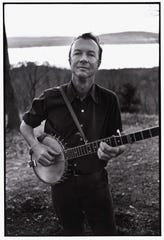 Pete Seeger with his banjo at his home in upstate New York. (Photo: Bruce Davidson)

Pete Seeger was well read, always looking for a good quote. He shared these in his columns and songs. He took this from the biblical Book of Ecclesiastes. Based on the line “To everything, there is a season and a time for every purpose,” “Turn! Turn! Turn!” became one of his best-known songs.

Looking through a book of Dylan Thomas’ essays, Seeger found a poem by former Welsh miner Idris Davies. It was an ode to the Welsh miners and named various Welsh towns. Seeger put the poem to music.

For years, migrant workers have come north from Mexico to do the hard work of picking crops. Woody Guthrie wrote these lyrics, later set to music, after reading about a plane crash of workers in California’s Las Gatos Canyon. They weren’t important enough to be named; they were just deportees. Seeger always championed his friend’s songs.

Seeger was a member of the hit-making folk group the Weavers in the early 1950s. They took the melody from a Lead Belly song, replaced the words with their own and created one of their best-known songs. Others have performed it in the years since.

“Wasn’t That a Time”

Seeger’s one-time Weavers bandmate, Lee Hays, wrote this with Walter Lowenfels. A triumphant tale of American history, it is also a commentary on McCarthyism. When testifying in front of the House Un-American Activities Committee, Seeger asked to sing it. He was denied.

Many of Seeger’s albums were for children. His father, Charles, made up funny story songs based on old songs. He remembered this one based on a Tin Pan Alley song called “May Irwin’s Frog Song.” Seeger made up story songs, too, like “Abiyoyo.”

During the 1960s, Seeger took up the cause of environmentalism as he witnessed the pollution around him. One of his favorite songwriters was Malvina Reynolds, who also wrote “Little Boxes,” and this song comes from her.

During the 1940s, Seeger fell in with a group of musicians that included Lead Belly, Woody Guthrie and others. After Lead Belly’s death, both Seeger and the Weavers continued to record and promote Lead Belly’s songs like “Goodnight Irene” and this one.

“Sailing Up, Sailing Down”

To aid his cause to clean up the dirty Hudson River, Seeger and others crafted a sloop called Clearwater. They sailed up and down the river in Clearwater, putting on concerts to encourage cleaning up the river. They eventually met with success. This is one of the best-known Clearwater songs.

“One Grain of Sand”

Pete Seeger used the metaphor of a seesaw with a giant rock on one end (representing powerful interests) and, on the other end, a large jar filled with sand. He argued that if enough people put one grain of sand in the jar it would outweigh the rock. Nothing is insurmountable.