As Brian Molko and co kick off their U.K. and Ireland tour in Portsmouth tonight, November 18, they’ve requested gig-goers keep their smartphones in their pockets.

AceShowbiz –Placebo have asked fans not to take pictures or videos with their mobile phones at their concerts. Brian Molko and co kick off their UK and Ireland tour in Portsmouth tonight, November 18, and they’ve requested gig-goers keep their smartphones in their pockets so they can be “present in the moment” and have a transcendent experience.

A statement read, “Dear Placebo fans, we would like to kindly ask you NOT to spend the concert filming or taking photos with your mobile phones. It makes Placebo’s performance so much more difficult. More difficult to connect with you and to communicate effectively the emotions of the songs. It is also disrespectful to your fellow concert-goers who want to watch the show, not the back of your phone.” 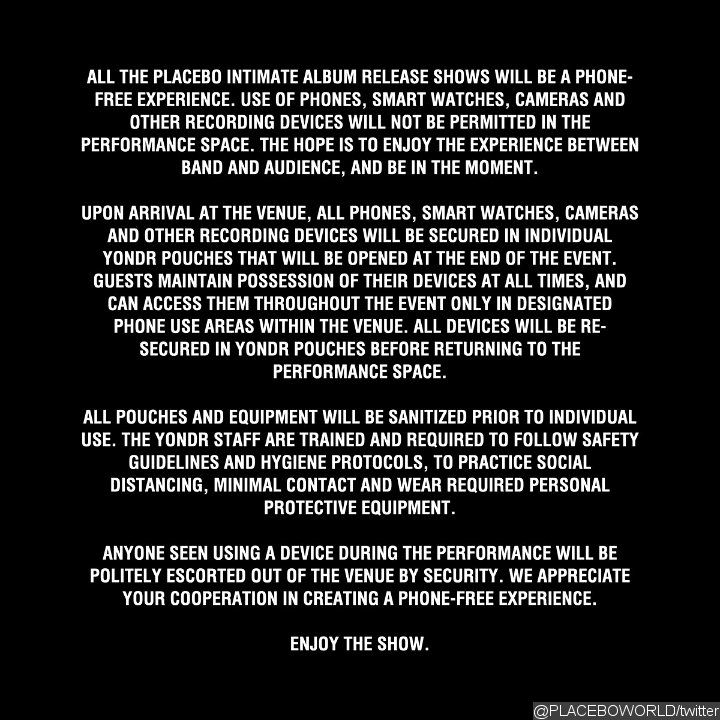 Placebo asked fans not to film and take pictures at concert.

They added, “Please be here and now in the present and enjoy the moment. Because this exact moment will never ever happen again. Our purpose is to create communion and transcendence. Please help us on our mission. With respect and love.”

Earlier this year, the “Every You Every Me” group hosted a run of phone-free concerts. Fans were warned, “Anyone seen using a device during the performance will be politely escorted out of the venue by security.”

Meanwhile, Placebo are on the bill for the 20th-anniversary edition of Download Festival. Metallica, Slipknot and Bring Me The Horizon will headline next year’s event, which takes place between June 8 and 11 at Donington Park, Leicestershire.

The spectacle will celebrate two decades in 2023, and to mark the milestone there will be four headline sets for the first time ever, with Metallica set to deliver two no-repeat performances on June 8 and June 10. The “Enter Sandman” rockers said, “We are next-level honoured to once again come back and partake in the Download shenanigans on the hallowed grounds of Castle Donington, which has an unparalleled place in rock history. On top of that, to be able to share our double show format with two completely unique sets with no repeat songs for the first time ever in the U.K. is way f**king cool. Bring it on!”

Bring Me The Horizon will headline the music extravaganza on June 9, and Slipknot will close the event on June 11. Evanescence, Parkway Drive, Disturbed, Pendulum, Architects, Ghost, The Distillers, Alexisonfire, Asking Alexandria, Motionless In White, I Prevail, The Blackout (reunion), Fever 333, Stray From The Path, Lorna Shore, Nova Twins, and Municipal Waste will also perform over the weekend. Many more acts and surprises are to be announced to celebrate Download’s 20-year legacy at Donington Park.