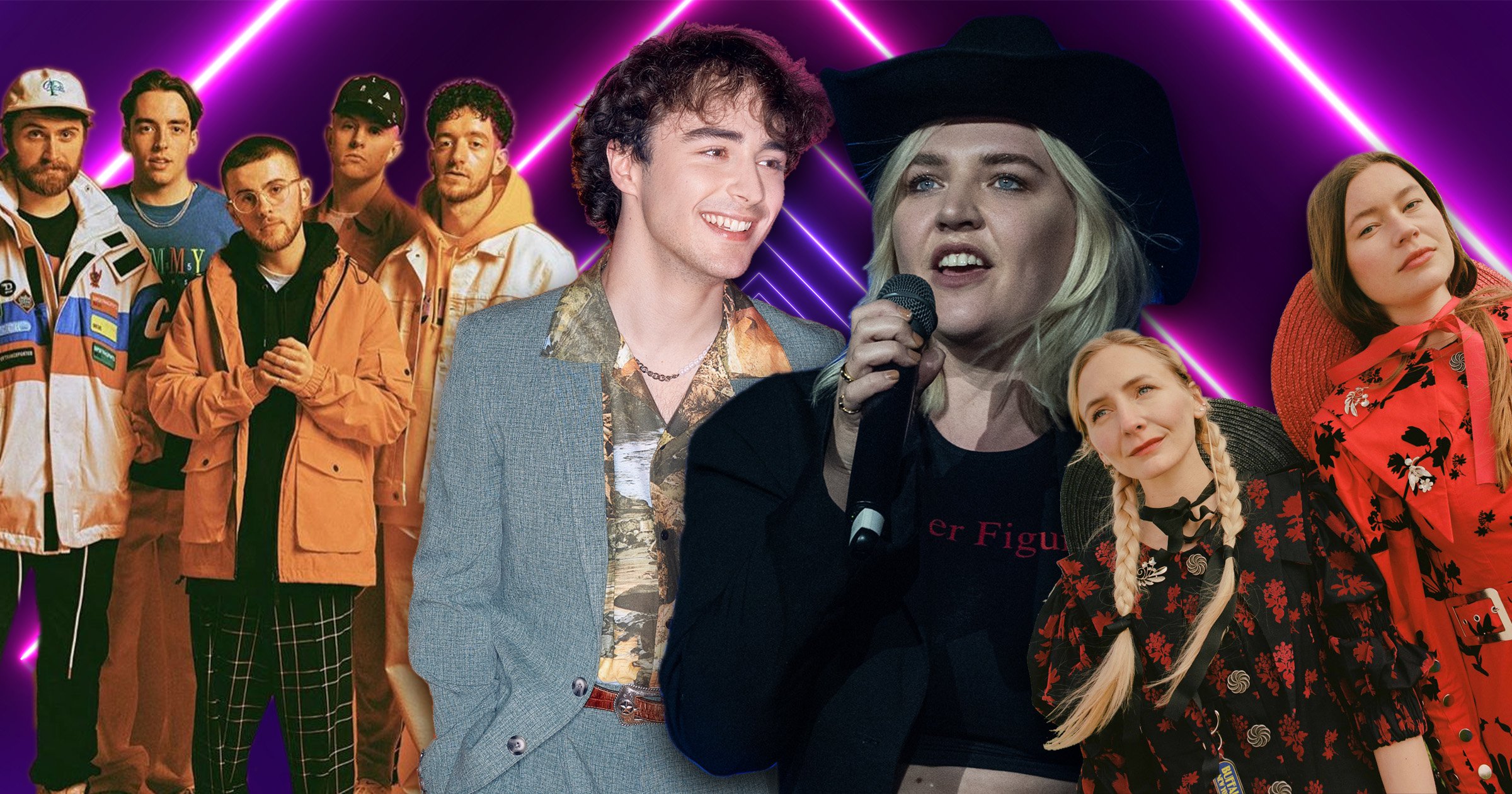 Glastonbury Festival finally kicks off today, with hundreds of acts for punters to enjoy, but here are a few of Metro.co.uk’s favourite up-and-coming artists about to make it to the big time.

The festival marks its 50th event this year, after a three-year break due to Covid. But it’s finally back, and set to be bigger and better than ever before.

Featuring the youngest and oldest ever headliners, in the form of Billie Eilish and Sir Paul McCartney, Glasto is already making its mark in the history books before it’s even really got going.

There are even rumoured to be secret shows from the likes of Green Day, Harry Styles and Florence & The Machine.

And as if things couldn’t get any better for the thousands flocking to Worthy Farm, the weather is looking pretty promising, too (at least for now).

But away from the headliners, we’ve picked 10 music acts that you might get to see for the last time before they catapult up to the next level.

The Indie band hailing from Leicester are providing absolutely exquisite summer vibes that’ll transport you straight to the Med with their debut album Life’s a Beach, which followed through on the promise of catchy pop/rock numbers that convey the message of self-love and acceptance.

They came second in the 2020 edition of the BBC’s Sound of…, a placing casually shared with the likes of Marina, Frank Ocean and Ella Eyre over the years.

The quintet are getting plenty of radio play, with love from the likes of Annie Mac, and things are sure to only take off, even more, when their second album, Maybe in Another Life, is released in August.

Easy Life will play the Pyramid Stage at 2.30pm on Saturday, June 25.

At only 19-years-old, Alfie is staying incredibly calm for someone who’s got it all going on right now.

His upcoming first full-length album draws heavily on the isolation and fear of a pandemic as a teenager, Alfie recently told Metro.co.uk hopes the record, titled Mellow Moon will let people know that ‘it’s normal to feel those things’.

‘It’s important going forward, for teenagers listening to this in the future, to know it’s completely OK to be like that. No matter the situation. And there’s very good guitar solos in it!’

Alfie Templeman will play on the Williams Green stage at 8.30pm on Friday, June 24.

Mikayla ‘Koffee’ Simpson’s career is going from strength to strength, with the Jamaican reggae singer, songwriter, rapper, DJ and guitarist having just released her debut full-length album, Gifted, at the age of 22.

She’s also been dubbed by Glastonbury itself as ‘the most exciting voice in reggae’, so if that’s not a reason enough to tune in, then we don’t know what else to tell you.

Koffee will play on the West Holts stage 6.30pm on Sunday, June 26.

Her vulnerable yet catchy pop tracks such as London is Lonely and Scarlett have led to her following growing exponentially, having just come off the back of a tour supporting actual Olivia Rodrigo in the US.

Holly, 22, cites Damien Rice, Ben Howard, Phoebe Bridgers, and Haim as musical inspirations and has stated she mostly identifies with ‘female writers who overshare’, and has described her own musical style as ‘quite self-exposing.’

She’s also discussed growing up in a small town (Grantham, Lincolnshire), stating there was ‘no music scene growing up in rural Lincolnshire, so I just really did my own thing’ in an interview with The Telegraph, and it’s just as well, because she’s continuing to kill it.

Holly Humberstone will play the John Peel Stage at 2pm on Saturday, June 25.

Rebecca Taylor aka Self Esteem is the breath of fresh air you didn’t know you needed, an artist capable of delivering tracks that are unapologetic and thought-provoking all at the same time.

Even if you haven’t heard of her, you’ve definitely heard some of her magic already, with Rebecca having penned the soundtrack for Jodie Comer’s play Prima Facie, as well as offering up three new covers to Dolly Alderton’s romantic comedy/drama, Everything I Know About Love.

In January she was on the shortlist for Best New Artist at the Brits, and with themes of sexuality, violence against women and mental health all featuring heavily in her output, she is already proving to be one of the most important voices in British pop for more reasons that one.

Self Esteem will play the John Peel Stage at 4.15pm on Saturday, June 25.

Norwegian singer Marie Ulven, who performs under the name Girl In Red, pens vulnerable, heartfelt lyrics as well as offering up plenty of bangers in the back catalogue too.

She’s quickly become an icon for queer women across the globe, and for good reason, which you’ll soon discover by giving her music a whirl.

The artist will bring her incredible presence to the stage on Friday where fans can expect to hear her breakthrough track I Wanna Be Your Girlfriend, which recently went viral, as well as her many other hits.

Irish singer-songwriter and guitarist Orla originally gained popularity by posting cover songs on her YouTube account. She’s been in the game for a long time now, but the folk-pop star is finally getting the recognition she deserves.

The 27-year-old’s debut album Woman on the Internet was released last August, and through her career so far, has been most heavily influenced by Joni Mitchell, Regina Spektor, and Imogen Heap – we’re sure you can already get a sense of the incredible vibes from this alone.

She frequently refers to herself as a “music makin’ ginger nutcase and we love her all the more for it.

Orla Gartland will play the Avalon Stage at 7.50pm on Sunday, June 26.

South East London rapper Enitan Adepitan aka Enny, 27, is delivering her message of Black empowerment through her growing list of bangers but has ambitions to go even further.

The Peng Black Girls rapper has previously collaborated with the likes of Jorja Smith, who signed her to her own label FAMM.

Enny is becoming a part of the golden age of UK rappers and is clearly only going to become more integral to an ever-growing scene and definitely one to keep a close eye on.

Okay, Rhian Teasdale and Hester Chambers aka Wet Leg are already having an absolutely massive 2022, so it’s hard to believe they only started up things in 2019.

The indie-rock pair from the Isle of Wight first met at college ten years ago and gained much attention after the release of their incredibly catchy debut single Chaise Longue. It became a viral hit in 2021, and even features hilariously bonkers lyrics inspired by Mean Girls.

Their self-titled debut album debuted at number one on the UK Albums Chart back in April and have fans including Harry Styles, who picked the band as his support act for the Australia and New Zealand leg of his tour in 2023.

Extra fun fact, they chose their name by playing a game picking different emoji combinations and getting to Wet Leg. It clearly stuck, and we can’t wait to see where these two go next.

Wet Leg will play The Park Stage at 2pm on Friday, June 24.

Breakthrough band Sports Team are just about to release their second album titled Gulp, right at the height of the festival season and are clearly ones to watch.

Their forensic outlook of modern Britain and stories of their youth have won them a dedicated community of fans already. In a previous interview with The Guardian, vocalist and songwriter Rob Knaggs perfectly summed up their more chilled-out approach to indie rock.

‘I really like roundabouts, Britain in Bloom competitions, local parish newsletters,’ he said. ‘High streets are covered in people’s symbols of belonging – like an Emma Bridgewater tin.’ So do we. Brilliant.

The group’s last record was 2020 Mercury Prize-nominated debut album Deep Down Happy, which reached number two on the UK’s Official Charts, achieving the biggest vinyl sales for a debut British artist that year.

Glastonbury coverage can be streamed across the weekend on BBC One, BBC iPlayer and BBC Sounds.