This reportedly took place in 1964, when The Beatles were already wealthy. But McCartney admits he was often motivated by money. He once said: "Somebody said to me, 'But the Beatles were anti-materialistic'. That's a huge myth." 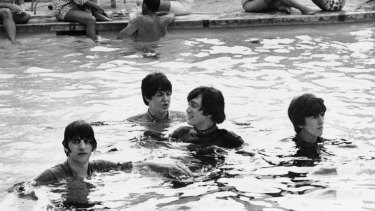 From left: Ringo Starr, Paul McCartney, John Lennon and George Harrison take a dip in the pool in the Bahamas with their clothes on while filming a movie, 1965.Credit:AP

The Beatles' songs have always been significant money-spinners. However, the members weren't always getting as much of the profits as they should have been, as McCartney and Lennon didn't own the copyright to their catalogue.

"In the world of music publishing, copyright is all-important," explains Brian Southall, in his book Northern Songs: The True Story of the Beatles Song Publishing Empire. "For songwriters and publishers alike the most important five words are always the same: 'never give up a copyright'.

"While Lennon and McCartney never actually gave up the rights to their songs, they did somehow manage to lose them along the way as deal after deal turned their creations into increasingly valuable company assets."

In 1963, as the band released their debut album Please Please Me, manager Brian Epstein sought a publisher for their songs. Epstein met music mogul Dick James, who suggested they form a company together with Lennon and McCartney, with the Beatles' members owning 20 per cent of the business apiece and James a majority share.

That company was Northern Songs Ltd, which went public two years later – Lennon and McCartney each owning 15 per cent and George Harrison and Ringo Starr splitting a small percentage (less than 2 per cent combined, according to reports). Harrison's diminished status as a junior songwriter prompted him to pen "Only a Northern Song", in which he expressed his dissatisfaction.

When, in 1969, James arranged to sell his share of Northern Songs to the British broadcasting company Associated Television (ATV), the band failed to gain a controlling interest and ATV acquired a majority stake in nearly the entire Lennon-McCartney catalogue. That year, the pair sold their shares to ATV, leaving them with no control over the publishing of their songs.

In the early '80s, the main stakeholder in ATV was the Associated Communications Corporation (ACC). But in 1982, Robert Holmes a Court – Australia's first billionaire – led a takeover of ACC. When he started selling off its interests, ATV went up for sale.

Michael Jackson, who had been told about the value of owning the rights to songs by McCartney during their collaboration "Say Say Say", purchased ATV's catalogue for $68.3 million, becoming the owner of some of The Beatles' biggest hits.

According to the book Michael Jackson, Inc, Jackson's investment in the ATV catalogue is worth around $US1 billion ($1.4 billion) today. In a 2009 interview, McCartney referenced Jackson's purchase, saying: "[Our friendship] kind of fell apart … because he was talking to me and asking me for business advice, and one of the things I said to him was think about getting into music publishing.

"Then I started to ring him up, I thought, 'here's the guy historically placed to give Lennon-McCartney a good deal at last' … I did talk to him about it, but he kind of blanked me on it. He kept saying, 'That's just business, Paul'. It was no big bust-up."

In 1995, Jackson sold half of ATV to Sony, creating Sony/ATV Music Publishing – he owned 50 per cent of it.

After Jackson's death in 2009, his estate sold his share to Sony for $US750 million – an increase of almost 1500 per cent on the investment.

In 2017, McCartney filed a lawsuit in a US court to secure the rights to his music from Sony ATV under the US Copyright Act of 1976, which allows songwriters to reclaim copyright of their music from publishers 35 years after they gave them away – or 56 years for songs from before 1978.

McCartney's lawyer announced a few months later that the two sides had reached a confidential settlement.

More than five decades on from their first album, The Beatles remain a cash-generating machine thanks to their back catalogue. In 2017, it was estimated the band and their estates earn £67,000 ($120,500) a day from music sales and licensing.

The US television drama Mad Men reportedly paid $US250,000 for the rights to use the Lennon-McCartney song "Tomorrow Never Knows" in 2012, while Danny Boyle's new Beatles film Yesterday spent an estimated $US10 million to feature some of the Fab Four's greatest hits, including "Let it Be" and "Hey Jude".

07/13/2019 Music Comments Off on Beatles: A long and winding road to recover their songs
Recent Posts