Caveman impersonator who felt like ‘a fake’ for living in a house reveals he sold his business, stays in a tent in the garden and eats raw meat (but still goes inside to use the internet!)

A flintknapper who runs prehistorical weekends has revealed he lives in a makeshift tent at the bottom of his garden like a true caveman after feeling like a ‘fake’ – but still has a house with internet and running water.

Will Lord, 51, from Suffolk, grew up on the prehistoric site of Grime Graves, a Neolithic flint mine, where his parents, John and Val, were the custodians for 13 years, and learned the skill of making of flaked or chipped stone tools by hand.

As an adult, he made a name for himself teaching people all about the prehistoric craft at festivals and shows around the world, becoming a ‘prehistoric pin up’

In tonight’s episode of Channel 5’s New Lives In the Wild, which airs at 9pm, Will tells presenter Ben Fogle that several years on the festival circuit made him feel like a ‘fake’ and pushed him to take his process one step further.

Despite previously owning a house with electricity, running water and the internet, Will, who sold his business to a colleague and hopes of creating a new way of teaching prehistoric arts, now sleeps in his garden, where he has built a makeshift tent with a workshop. 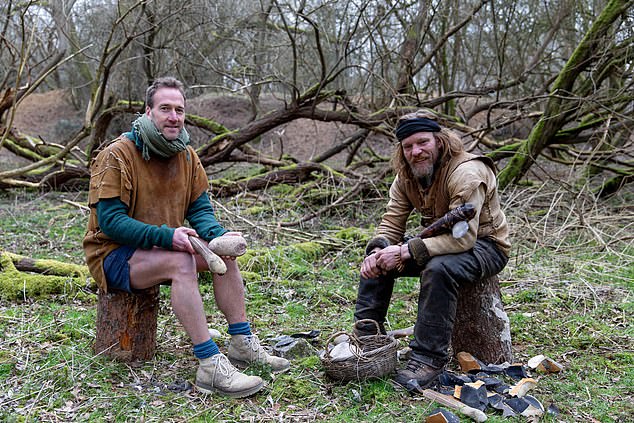 Will Lord, 51, pictured, from Suffolk, grew up on the prehistoric site of Grime Graves, a Neolithic flint mine, of which his parents, John and Val, were the custodians for 13 years. Will told Ben on Channel 5’s New Lives In the Wild, airing tomorrow at 9pm, that all these years on the festival circuit have made him feel like a ‘fake’ and have pushed him to take his process one step further

Will explained to Ben he used to be very successful at being an entertainer and putting on a show at festivals, but the success meant he didn’t feel comfortable living in a house anymore.

‘I got to a point I knew I couldn’t be inside anymore,’ he explained. ‘I actually thought there was something wrong with me, because I’d go in there and just felt like I’d stopped living.’

However, Will hasn’t given up on the modern world entirely. He drives an impressive motorbike and goes into the house when he requires the internet.

But he admits to Ben that performing in festivals has taken a toll on him, making him feel like a ‘fake.’ 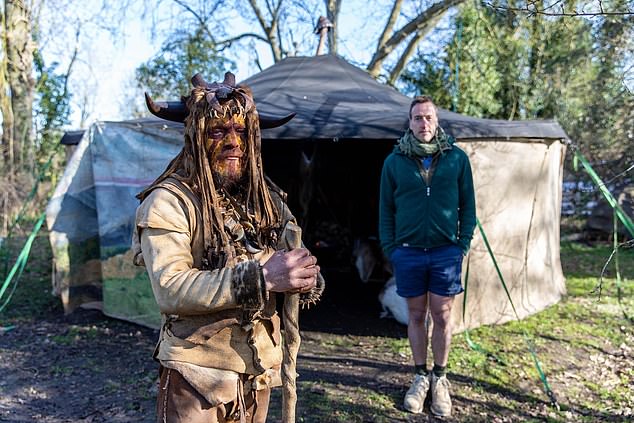 Will, who owns a house, told Ben he started sleeping outside after realising creating prehistoric tools was no longer ‘enough’

‘I decided that ochre looks good on my skin and was prepared to paint myself up and stuff like that,’ he said. ‘A lot of the shows I was going to choose to use my face on the posters.’

‘I was the prehistoric pin up for People’s Festival and so forth which meant quite a lot of them, when I showed up, didn’t want me just smashing a rock. They wanted me to put a show on for them which involved being a showman and a storyteller. I fitted into that role real well.’

He continues: ‘And that became a successful business – so successful that it was seven days a week. It really came through to a point where it wasn’t enough. 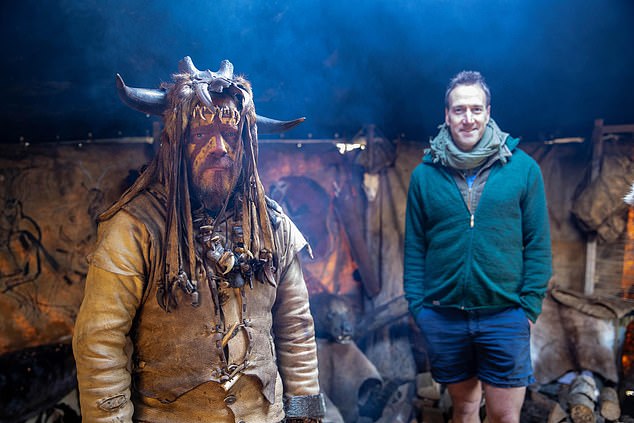 The flintknapper welcomed Ben in a traditional headpiece and with ochre painted on his face, pictured 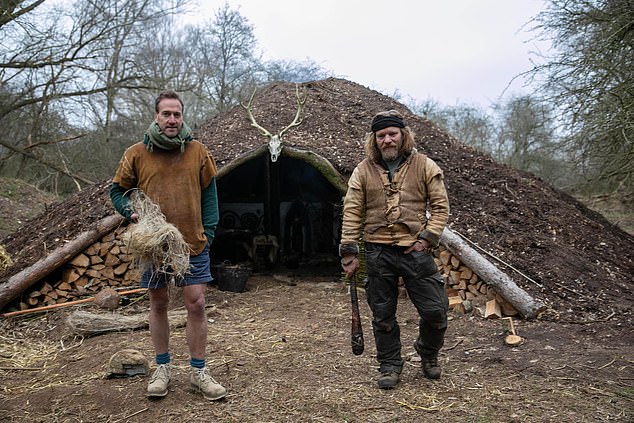 Will has started to build earth lodges on the estate of the Duke of Grafton, where he plans to have prehistoric workshops (pictured)

‘I was starting to feel like something missing. I was making all this paraphernalia but there was a hollowness to it. I felt a bit of a fake, to be honest.’

As a result, Will sold the teaching side of his business to a colleague but kept the workshops running ‘to give himself the space.’

‘It wasn’t the wisest financial move that I ever made, but there was something more important coming to the surface and it was me,’ he said. ‘My own needs. It was a great moment to arrive to that.’

Will grew up on the Neholitic Flint Line of Grime Graves and learned flintknapping from his father John from a young age, along with the experts who worked on the site.

When presenter Ben Fogle visited Will at his Suffolk home, he was surprised to find him wearing a headpiece made from bones and ochre on his face.

Will led him into the tent in his garden and invited the adventurer to a prehistoric homecooked dinner. 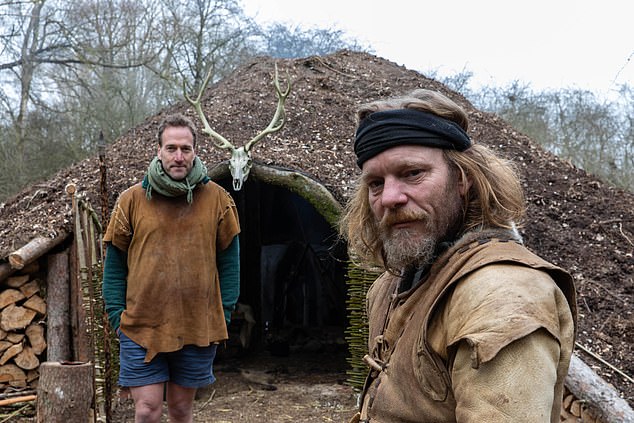 The experience was very intense for Ben, who watched in disgust as Will dismantled a deer with a prehistoric knife he previously made, and asked his guest to cut through the animal’s diaphragm to eat its heart.

While he offered a cooked portion of the heart to Ben, Will prefers to eat his meat raw, saying it tastes ‘divine.’

After making a strong first impression, Ben said he considered Will to be a ‘performance artist.’

In the show, Will explained how he was granted access to 1,500 acres belonging to the Duke of Grafton, 21km away, on his Houston Estate.

Will, who knows the Duke from the festival circuit, told how he asked him if he could use the land to organise classes.

There, Will talked Ben through the earth lodges he is building in preparation for his next class. Joking he was closest to the Neanderthal Man, he taught Ben how to make his own tool out of flint and build a door for one of the lodges.

He also admitted to the presenter that his 11-year-old son Xander is not interested in prehistoric living – and that he doesn’t have a lot of time to give his son as a result of working the festival circuit.

‘It’s kind of important I just let him do his own thing,’ he said. ‘I feel a bit bad about that. That’s one of the things I’m hoping that this new period gives me the opportunity to make up on. Getting a bit more time with him.’ 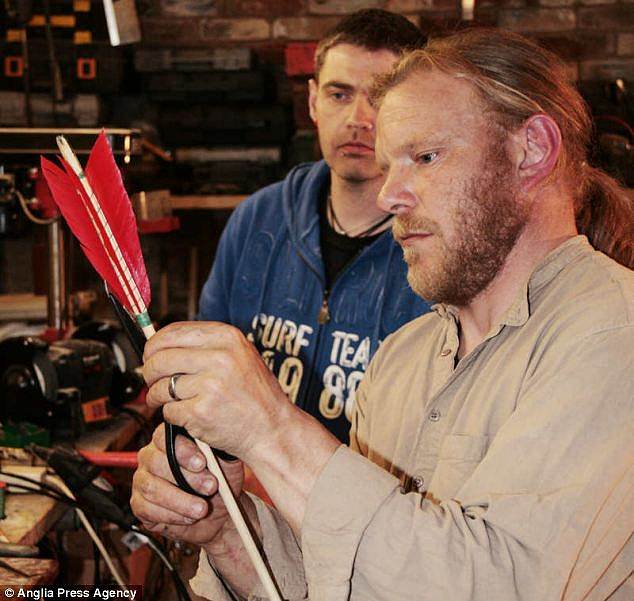 Pictured: Will during a teaching class in 2013, before he took his look and habitat further into prehistoric fantasy

Ben explained that Will practices a form of archaeology known as ‘experimental archeology,’ which means ‘filling the gaps that we can no longer see.’

‘I actually don’t worry because people are endlessly fascinated in ancient history, it has a following, people are taking up these crafts, it is in good shape and it is something that will go on,’ he said.

The man who grew up roaming free on a Prehistoric site admitted his parents’ decision to move from Grime Graves when he was 17 was a ‘trauma.’ 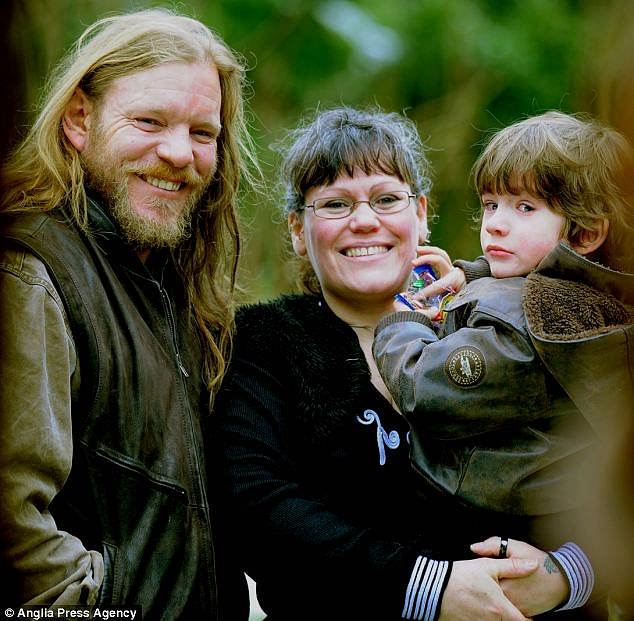 Will, pictured in 2013 with his wife Sarah, who was not mentioned in the programme, and their son Xander, who is now 11

‘The whole world had been tipped upside down,’ Will explained. ‘I had a confidence that a 17-year-old shouldn’t have. My world was complete at 17, that wonderful point in time.’

Ben observed that by building the earth lodges and workshops on Houston Estate, Will has gone ‘full circle.’

Will’s father John Lord, who was the ‘original’ flintknapper, and taught Will what he knows, also appears in the programme. 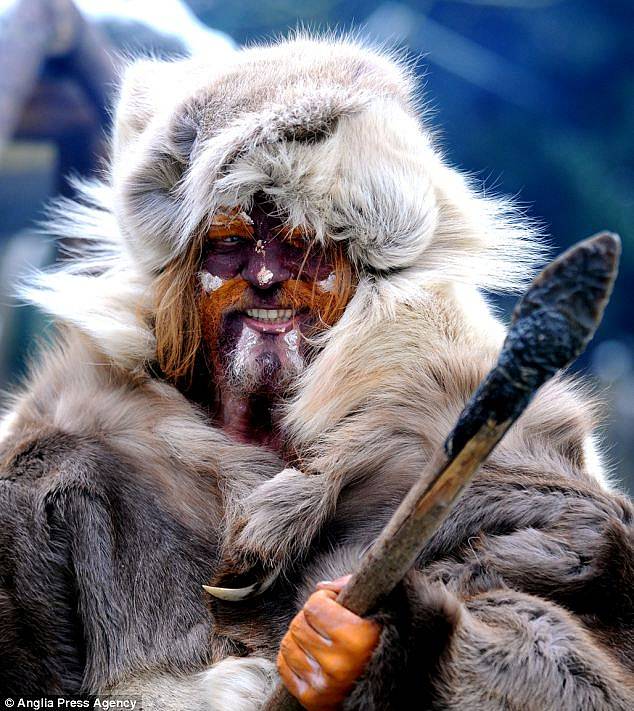 Will, pictured at a festival in 2013, used to dress up in fur and paint his body with ochre when he taught people about the prehistoric age during festivals

He told Ben he’s regretted leaving Grime Graves several times and said it was a ‘hard decision, and a bitter one.’

When the presenter pointed out leaving Grime Graves had been traumatic for Will and asked John if he thought his son would ever recover, John simply said: ‘Doubtful.’

However, Will looks optimistically to the future and is busy preparing his workshops.

‘He has this timelessness about him. I believe this is now a different era,’ Ben said.

Ben Fogle: New Lives in the Wild airs tomorrow at 9pm on Channel 5.