A pet groomer has revealed she spent six days planning a Nativity scene with a twist to spread Christmas cheer – using eight dogs to play Jesus, Mary and the other characters.

Lois Peckover, 34, of Wickford, Essex, and her friend Claire Koehl, 46, spent almost a week planning the Christmas scene, before dressing their pups in towels, doggy costumes and DIY crowns to recreate the biblical event.

The six poodles, one springer spaniel and one cockapoo posed patiently for the camera for two minutes as baby Jesus, Mary, Joseph, the angel Gabriel and wise men.

The dog-loving duo hope that using the eight mutts will remind people of ‘the real essence of Christmas’ – Jesus being born. 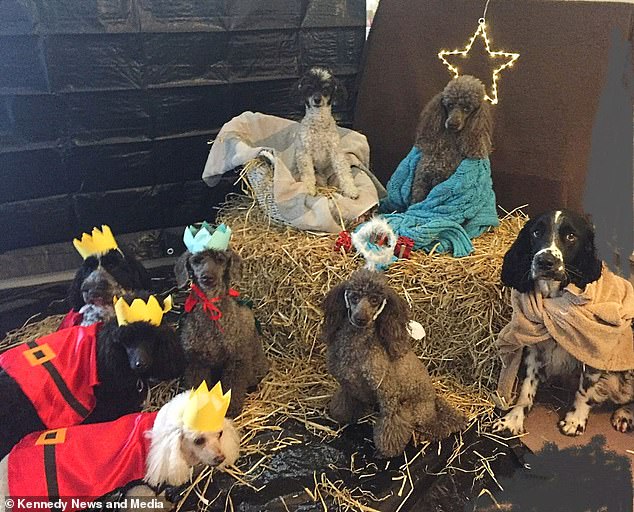 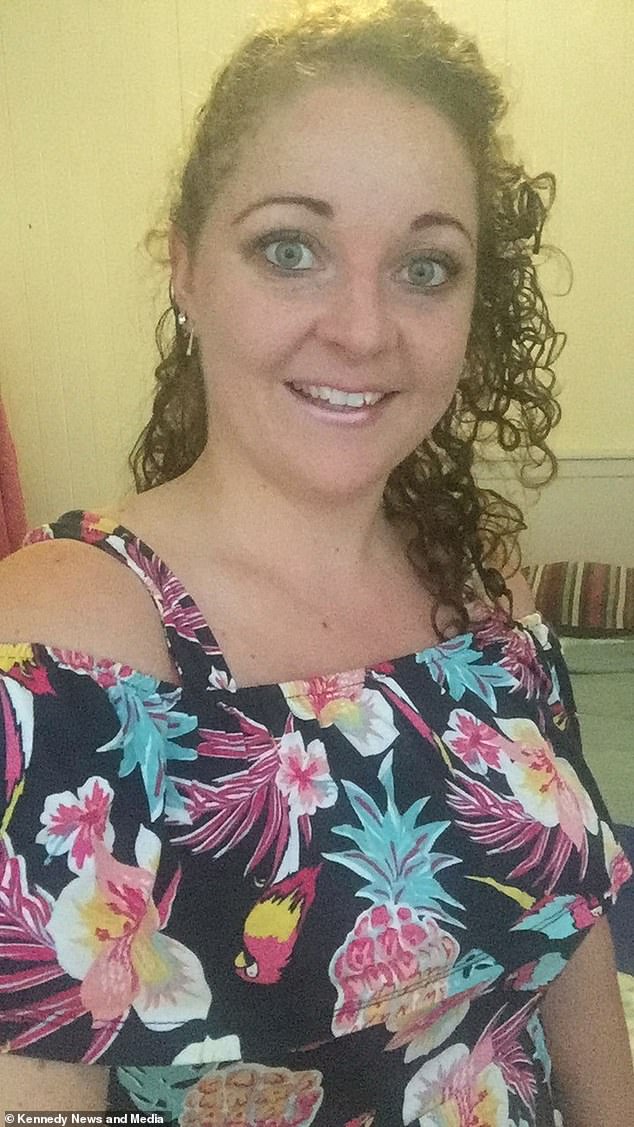 Pet lovers Lois and Claire spend six days planning the Nativity scene before transforming Lois’ living room in 90 minutes into a stable with blankets and a bale of hay (pictured, Lois)

The Nativity was set up in Lois’ living room, which the friends transformed to look like a stable using blankets, a shining star hanging from the back wall and a borrowed bale of straw.

After about 90 minutes moving furniture and spreading some hay to set the scene, it took Lois and Claire just two minutes to get their holiday-loving hounds into place and snap a few photos.

In one hilarious shot, camerawoman Lois, even held up a toy so the donkey that carried Mary and Joseph to Bethlehem appeared to be photobombing the festive scene.

Lois, who owns Lois’ Shear Pawfection dog groomers, said: ‘It was all very good fun. We had such a laugh. 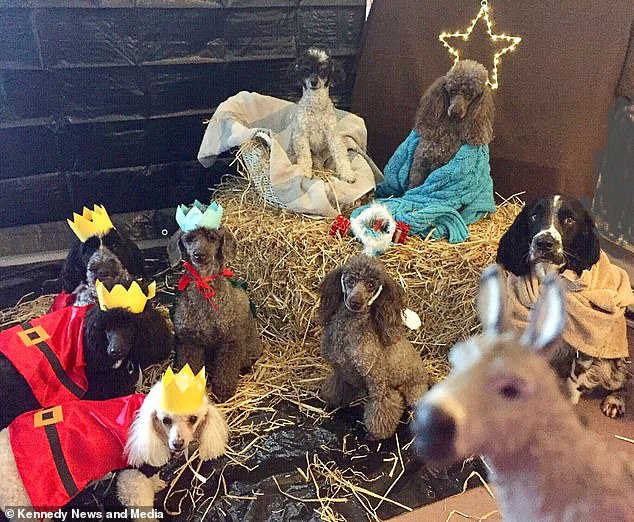 The women said they’d organised the festive scene to ‘capture the real essence of Christmas’ – the story of Jesus (pictured left to right, Missy, Faith, Poppy, Doody, Meesha, Rizzo, Frenchy and Harley in the nativity scene) 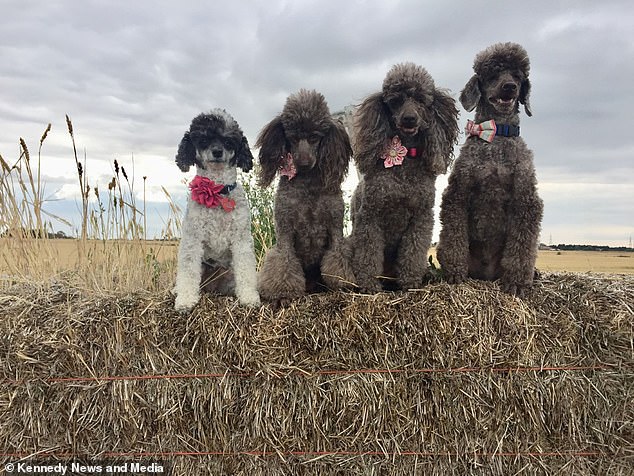 ‘People think it is amazing and have said how lovely and special it is. Loads of people don’t understand how we got them to sit still and look at the camera.’

She explained: ‘I didn’t have a ball or treat or anything like that, it was just me being an idiot shouting ‘look this way doggies’. It was really funny.’

Lois added: ‘Being able to share it with people and spread a bit of festive cheer would make my year – that would be my Christmas.’

The duo even included the fourth wise man who, according to the New Testament, tried to attend Jesus’ birth with gifts of sapphire, ruby and pearl but arrived too late.

Petowner Claire and her pooches Faith, Missy, Harley and Poppy joined her friend to help create the incredible scene (pictured, left to right) 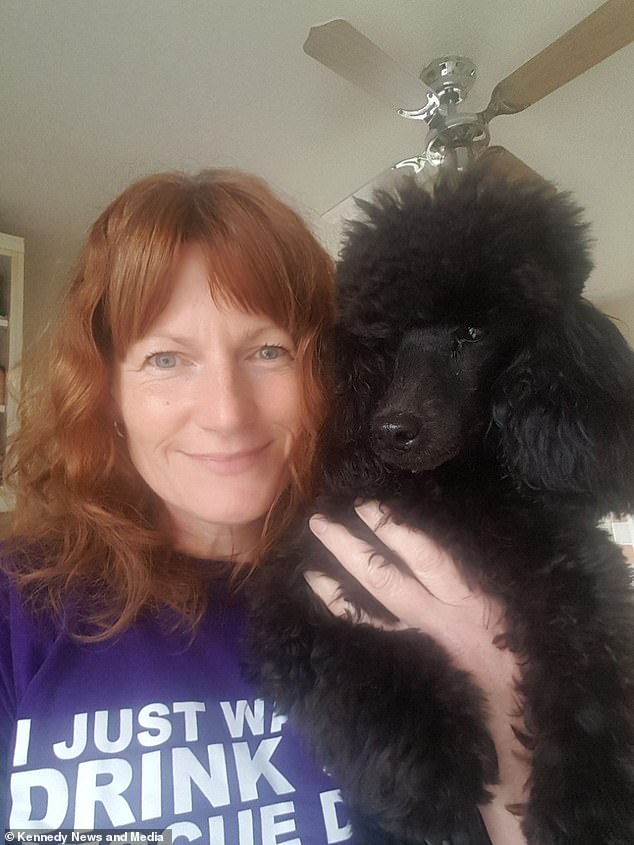 Claire, pictured here with her puppy Faith, said she was ‘really happy’with how the photographs turned out, and hoped it would remind people the true message of Christmas

‘We wanted to capture the real essence of Christmas – the Christmas story of Jesus being born.

‘It’s not all about having loads of presents and competing with the next person on how much you’ve spent. It’s all gone a bit crazy.’

After deciding to do their fun take on the Nativity, Lois and Claire spent the next six days sorting costumes and props. 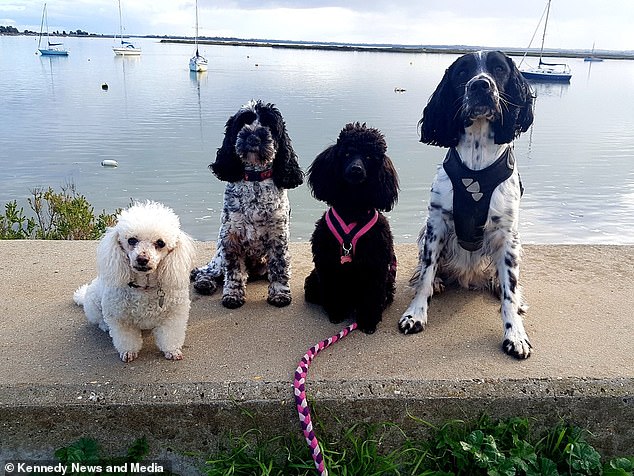 Claire’s dogs took on key roles in the nativity scene, including playing three of the wise men, as well as Joseph (pictured left to right, Missy, Poppy, Faith and Harley) 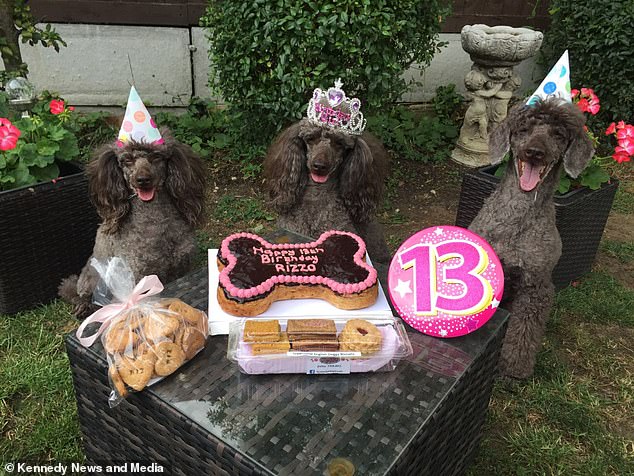 It’s not the first time the dogs have enjoyed dressing up: miniature poodles Frenchy, Rizzo and Doody all donned party outfits for a birthday celebration earlier this year (pictured left to right)

Lois bought dog Santa and elf costumes from the pound shop for the wise men and made their crowns out of coloured card, while Claire borrowed a bale of straw from her local farm shop.

The leading role of baby Jesus was played by Lois’ seven-year-old toy poodle Meesha who sat on a white blanket on a wicker basket atop the bale of straw.

Lois’s grey 13-year-old miniature poodle Rizzo was wrapped in a blue blanket to represent Mary and Claire’s English springer spaniel Harley, five, wore a beige towel to take on the role of Joseph.

The role of Gabriel was given to Lois’s grey mini poodle Frenchy, 10, while her brother Doody, also 10, was the fourth wise man. 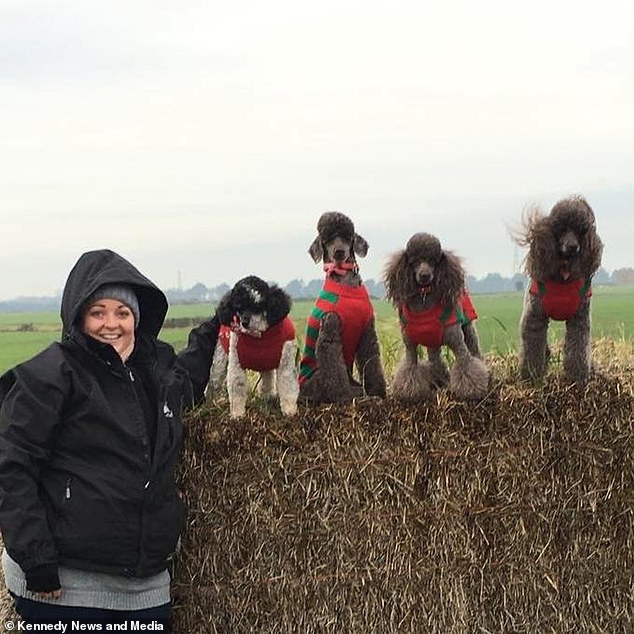 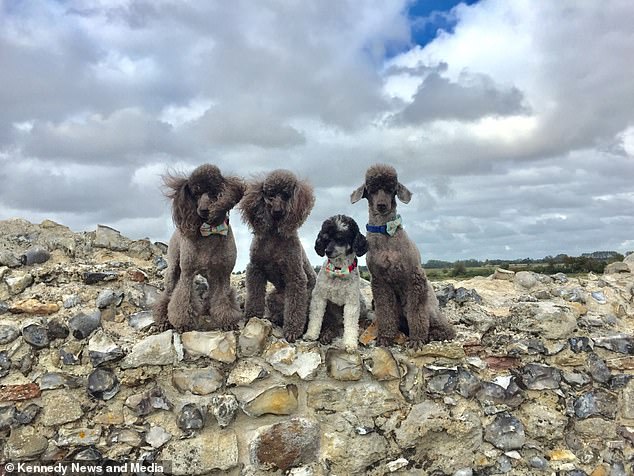 Claire said she hoped her adorable pooches would help spread Christmas cheer with the photographs (pictured left to right, Frenchy, Rizzo, Meesha and Doody posing while on a walk together)

And the pooches’ owners both play their part too with Lois quickly snapping the photos and Claire strategically out of shot, holding Faith because the youngster kept trying to run off.

Lois said: ‘Claire turned up and said ‘I’ve got this’ and pulled out the donkey and I just wet myself laughing.

‘It was advertised as 30cm tall but it wasn’t. We think they must have meant 30mm. So we decided to have him photobomb a few of the photos as if it was a selfie. 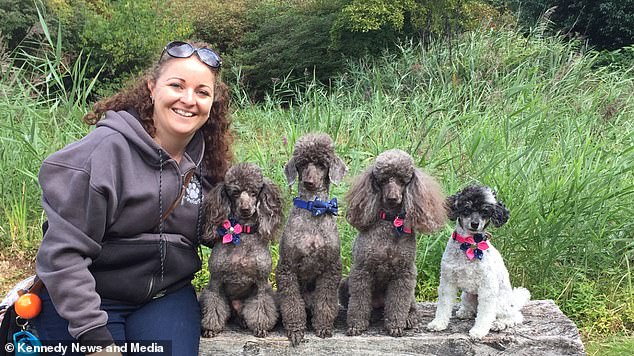 The women said they were already planning their next photoshoot with their pooches, but wanted it to remain ‘a surprise’ (pictured left to right, Frenchy, Doody, Rizzo and Meesha) 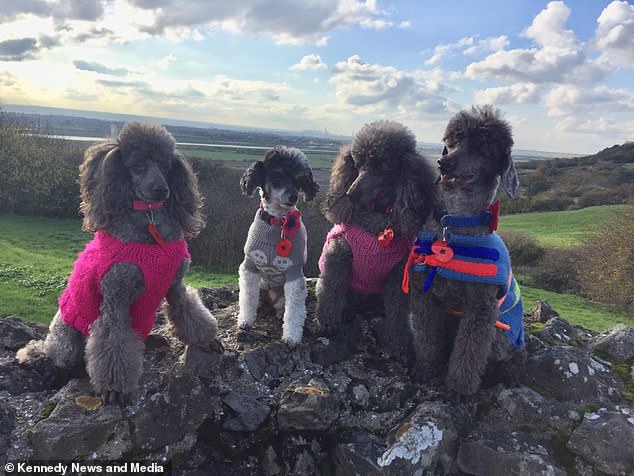 The dog groomer revealed her pets were accustomed to getting dressed up, and were ‘fussed over’ after the shoot for being so well behaved (pictured, Frenchy, Meesha, Doody and Frenchy together)

‘When we were done, all the dogs got fussed over for being so good and we pulled some of the straw out so they could run around in it.

‘The straw ended up everywhere, which was quite funny.’ Claire added: ‘Once we’d discussed where everyone was going to be, moved some furniture around and spread some of the hay, it didn’t take long.

‘Actually getting the photos only took about two minutes. There was a lot of clicking from Lois. We didn’t want the dogs waiting around for too long in their costumes.

‘It was a really good laugh and we’re already planning our next one but that’s a surprise.’