A student has revealed the enormous list of potential side effects that women face while taking the contraceptive pill ‘just so men don’t have to wear a condom’.

Georgia Shaw, 20, from Loughborough, took to Twitter to share the huge double-sided information leaflet that came inside her packet of the Rigevidon combined contraceptive pill.

The politics student, who attends Nottingham Trent University, admitted that she was ‘scared’ to take it due to the list of potential side effects.

Her Twitter post has since racked up more than 23,000 likes, but has proved divisive, with some saying women ‘sign up’ to the risks by choosing to have sex.

However others offered their support and said it was selfish of men to make women ‘expose’ themselves to the risks just so they don’t have to wear a condom. 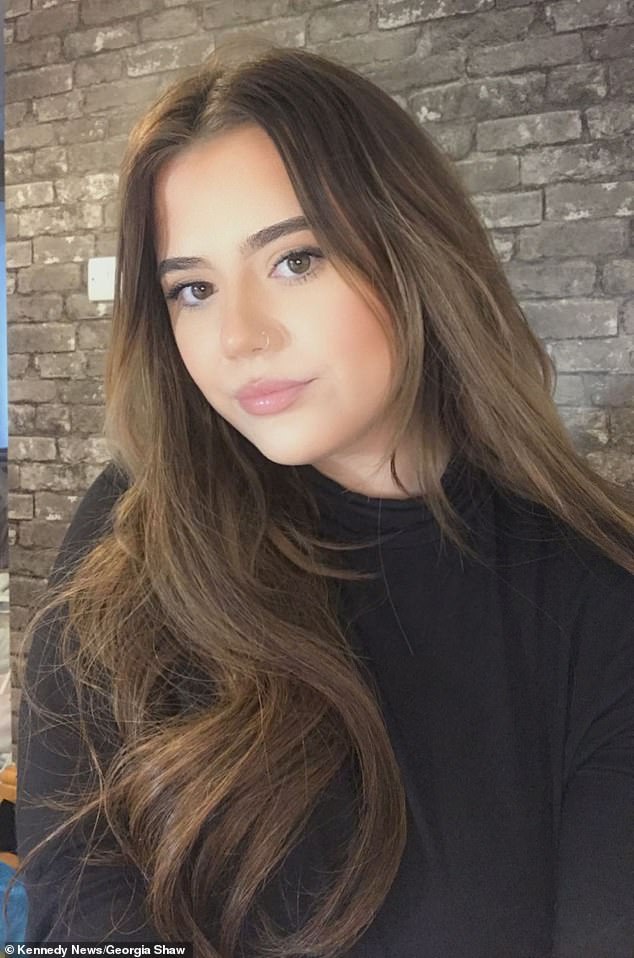 Georgia Shaw, 20 (above), from Loughborough, took to Twitter to share the double-sided information leaflet that came inside her packet of the Rigevidon combined contraceptive pill 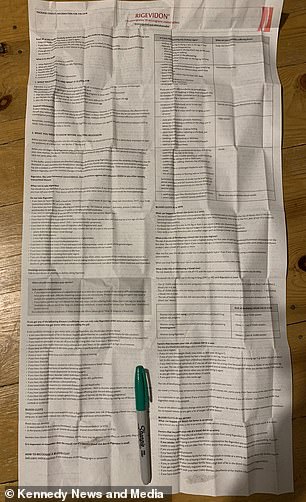 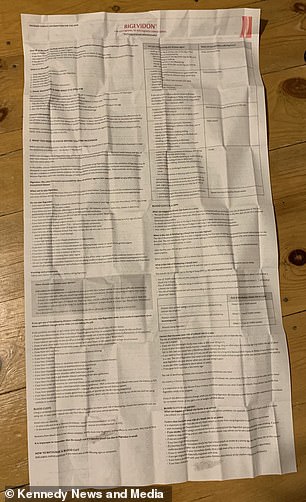 Georgia admitted that she was ‘scared’ to take it due to the double-sided list (left and right) of potential side effects, which she displayed next to a pen to show how extensive it was

The politics student, who attends Nottingham Trent University, wanted to show men who ‘wont wear a bit of rubber’ the extensive list of potential side effects of contraception

‘I’d just been put onto Rigevidon and when I opened the packet and looked at the leaflet I thought “oh my God”, I’d never seen a leaflet that big before,’ Georgia said.

‘I just felt quite scared and quite nervous about what I was putting into my body if that was the massive list of things it might do to me.’

Georgia had previously been on the Microgynon contraceptive pill for just three weeks but decided to switch to the Rigevidon pill due to the effect it had on her mood.

The potential side effects include an increased risk of developing a blood clot, while it also listed ‘malignant tumour of the liver’ and gallbladder disease among the very rare side effects.

According to the NHS website, minor potential side effects from the combined oral contraceptive pill also include mood swings, nausea, breast tenderness and headaches, but Georgia said she’d been fortunate so far. 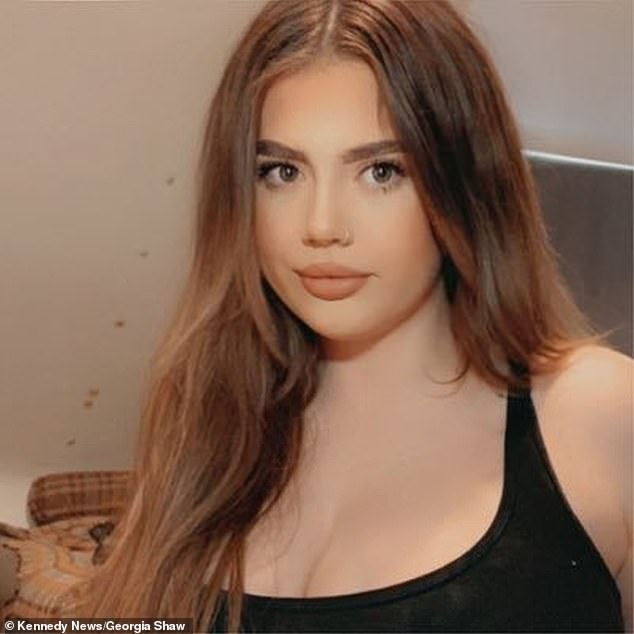 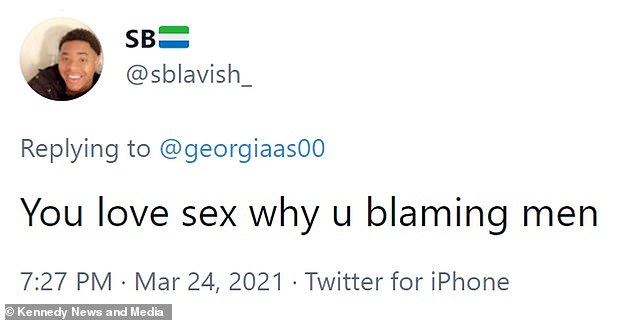 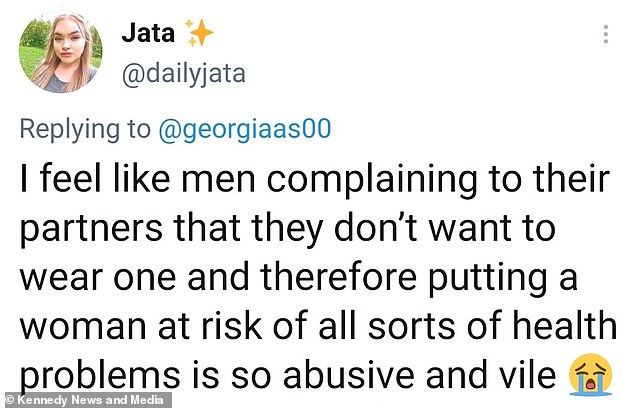 Her Twitter post has since racked up more than 23,000 likes, with many people offering their support while others claimed that by choosing to have sex, women ‘sign up’ to the risks 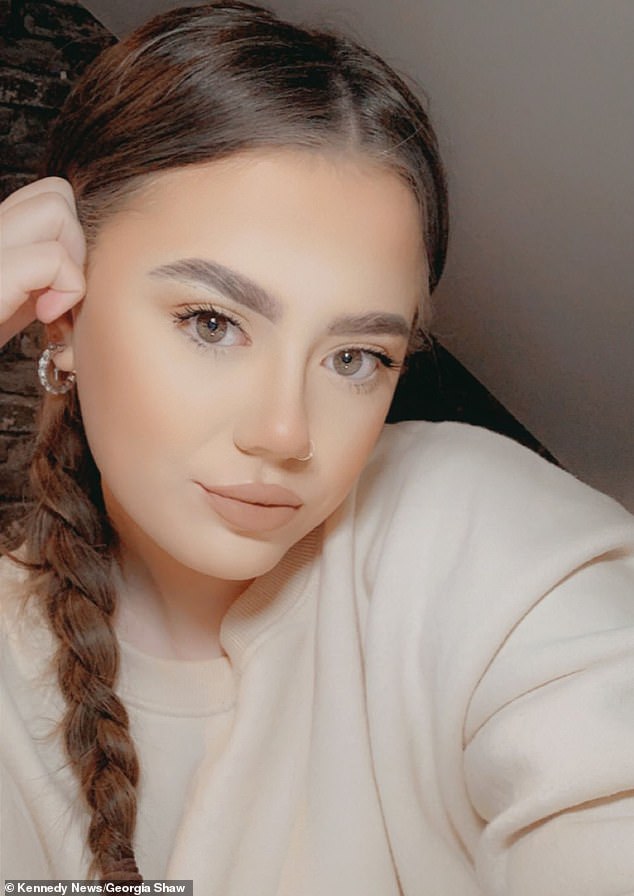 According to the NHS, minor side effects from the combined oral contraceptive pill include mood swings, nausea, and breast tenderness, but Georgia (above) said she’d been fortunate

Georgia said: ‘Despite a lot of people warning me against taking it, at the moment I feel completely fine.

‘My skin has cleared up a little bit and the only change I’ve noticed is my appetite, I’ve just been craving a lot of fatty foods.

What are some of Rigevidon combined contraceptive pill’s potential side effects?

Georgia added: ‘There’s a massive difference in how men are reacting versus how women are.

‘I’ve had a lot of messages of support from women and a lot of concerned people who keep telling me “check your blood pressure now and again” and “make sure you’re noting down any symptoms that you are feeling”.

‘The response from men has been “oh well women enjoy having sex too, deal with it”.’

‘Combined hormonal contraceptives (CHCs), like Microgynon, are among the most systematically studied and widely used medical products available today.

‘Depressed mood and depression are well-known undesirable effects of hormonal contraceptive use, affecting more than one in 100 women.

‘Depression can be serious and is a well-known risk factor for suicidal behaviour and suicide.

‘Women should be advised to contact their physician in case of mood changes and depressive symptoms, including shortly after initiating the treatment.’

MailOnline has contacted Gedeon Richter, who manufacture Rigevidon, for comment.

04/01/2021 Lifestyle Comments Off on Woman, 20, shows list of side effects of taking a contraceptive pill
Recent Posts