NSW Labor leader Chris Minns has one message for his team – supreme discipline is the party’s only path to electoral success, whether that be a blanket ban on drinking in Parliament House or sticking to a handful of policy areas and not deviating from those. He does not want to offend or be involved in public feuds.

Minns does not want his MPs to expend one ounce of extra energy beyond their policy platform. That means the premier-in-waiting will not be weighing into any policy debate that does not fit neatly into his plan. Most notably that includes the escalating debate over whether the state should heed the recommendations of the hugely damning NSW Crime Commission report and implement a cashless gaming card. 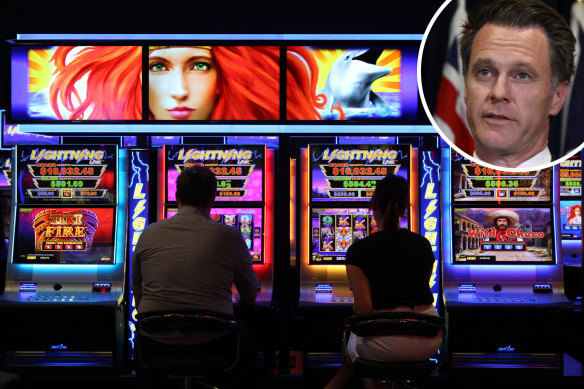 It is hard to see who Minns would offend by acting on the long-overdue gaming reform measure other than the state’s powerful clubs and pubs lobby. Indeed, Labor’s memory is long and many MPs and staffers are still recovering from the ferocious campaign unleashed against Julia Gillard more than 10 years ago when she attempted to overhaul pokies.

One NSW frontbencher described it as “collective post-traumatic stress disorder”, still haunted by visions of cardboard cut-outs of MPs in marginal Labor seats greeting patrons at their local leagues club or RSL. That ClubsNSW Save our Clubs campaign was brutally effective.

Yet this is very different. In 2011, then federal opposition leader Tony Abbott was a driving force behind the campaign, speaking at rallies organised by clubs and vowing to rescind Gillard’s mandatory pre-commitment scheme if elected. Fast-forward a decade and, in NSW, Premier Dominic Perrottet is the most vocal supporter of the need to clean up money laundering and problem gambling. So, unlike Gillard, Minns does not have a political enemy on this issue.

Rather than taking what could be a straightforward road, and offering bipartisan support to a gaming card as recommended by the Crime Commission, Minns wants to avoid the issue. He says he is worried there could be unintended consequences of any sweeping changes to the industry and a softly-softly approach is needed instead.

However, when pushed by the country’s most high-profile anti-gambling crusader Tim Costello delivering the ultimate barb – labelling NSW Labor the “party of social injustice” – Minns shifted a little, saying he would be OK with a trial, but not a mandatory one.

Costello scoffed, quickly likening Minns’ proposed trial as being useful as “an opt-in braking system in a car”. “As if a crim or a problem gambler is going to opt in to a trial,” Costello said.

The NSW Crime Commission says an opt-in system would not work. “Introducing a voluntary system (where gamblers can opt to use either cash or a player card) will not address money laundering, as criminals dealing with the proceeds of crime will simply use cash,” its report says.

Under Minns’ election strategy (which, it should be said, is enthusiastically embraced by most of his frontbenchers and is being fine-tuned by the likes of Kevin Rudd’s former principal press secretary Lachlan Harris) Labor has five areas to focus on: no more privatisation; jobs and local manufacturing; health; education and cost of living. Nothing more, nothing less.

Minns believes he has a watertight strategy by zeroing in on bread-and-butter Labor issues, one that will win the party seats in the battleground of western Sydney. He has a classic small target strategy, one which was put to the test successfully by his federal colleagues earlier this year. Helped along by a hugely unpopular prime minister in Scott Morrison, Anthony Albanese won not by emphasising what he would do, but what he wouldn’t.

Minns is doing the same with gaming reform.

He won’t just blindly follow Perrottet’s push to pursue a mandatory cashless gaming card. He won’t “hand over the state to [independent MP] Alex Greenwich and let him determine policy for every area of public life in the state”. He won’t be “steamrolled into a policy position without the evidence base in place” and he won’t “dismiss the ultimate economic impact” on clubs and pubs from pokies going cashless. 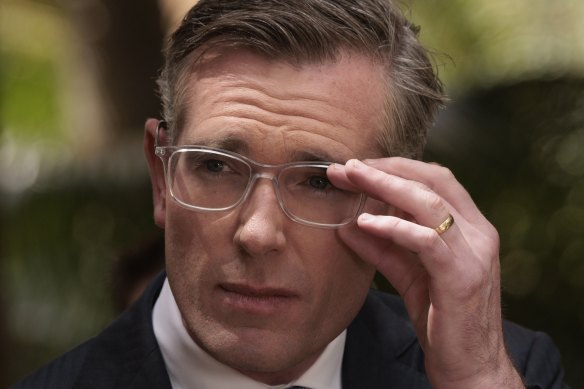 Premier Perrottet has said he will not sign any pre-election pledge with the industry. Credit:Brook Mitchell

Minns also won’t say what he would do to fix the problem.

As the final weeks of the parliamentary term speed to an end, with last-minute legislation being pushed through to ensure all loose ends are tied up ahead of the March election, the key issue plaguing the major parties is the gaming card – the Liberals and Nationals included.

Perrottet, enthusiastically backed behind the scenes by senior minister Victor Dominello, has to win over Nationals, who have always opposed a cashless card. He also has some naysayers in his Liberal party room. While Nationals leader and deputy premier Paul Toole is more accepting of the need to move to cashless pokies in private discussions with his Liberal colleagues, publicly he is less forthcoming. He, too, would not want to offend the clubs and pubs, who are the lifeblood of many small towns.

Ultimately, if Minns is squeamish about a brutal onslaught from the clubs and pubs, the NSW Crime Commission report gives him the perfect cover. Who can argue with the secretive but powerful integrity agency when it delivers a dire warning that money made by underworld crime bosses is being washed through the state’s poker machines and that taking cash out of the system is the only way to combat it? Minns, it seems.

The Opinion newsletter is a weekly wrap of views that will challenge, champion and inform your own. Sign up here.

More from our award-winning columnists

Australia’s future: Claire O’Neil, Minister for Home Affairs, is responsible for espionage, terrorism, foreign interference, cyberwar, criminal syndicates, and more. She says the best of times in modern history may be behind us – Peter Hartcher.

The bank of mum and dad: To what degree does a parent’s income determine their child’s future income? It turns out, the apple can fall far from the tree – Jessica Irvine.

Australia as a republic: If you’re going to ask Australians to forgo the monarchy, you’re going to have to replace it with something more fitting. What if, instead of a monarch or a president, we had an Australian Elder? – Waleed Aly.